The best things to do in Manila, Philippines

During a visit to the Philippines a few years ago, I spent a few days in the country’s capital, Manila. The city gets little attention in the western media, and when it does, it’s usually for the wrong reasons. High levels of pollution, overcrowding and horrendous traffic, it seems the city just can’t get a break.

However, on closer inspection, the city has plenty to offer travelers than just what you see in the news. Development in roads and infrastructure is constant, and the boost in foreign tourism, means that more people are coming to see it for themselves.

I’ll be the first to say that Manila is overcrowded. Its heavy traffic is enough to make anyone want to jump out the car window and walk the rest of the way. Still, what the city lacks in its dreadful traffic system, it absolutely makes up for in its character. This is not forgetting the exceptional warmth, friendliness and hospitality of the Filipino people.

Related post – Filipino massage: for the ‘Hilot’ of it

The best things to see and do in Manila

The mark of the Spanish colonial rule that lasted for over 300 years is still very prevalent around Manila. You only have to look at the architectural style of churches like San Agustin but also in the street names.

Paseo de Roxas in the Makati district area and Villalobos Street in Quiapo are 2 such examples. However, there’s no more compelling architectural symbol of the Spanish rule in Manila, than the walled city of Intramuros.

It was the seat of government and political power during the time of the Spanish Empire. The Manila Galleons that sailed for 250 years, brought goods from Intramuros in the Philippines to Acapulco, Mexico.

The walls were built to ward off foreign invasions, and any other towns outside the structure were known as extramuros. Towards the river is the grand Fort Santiago, the fortress protecting the city. Within the compound, you’ll also come across the beautiful Baroque church of San Agustin. La Iglesia de la Inmaculada Concepción de María de San Agustín dates back to the 14th century and is a UNESCO World Heritage Site.

I can’t write a post about Manila, and not mention Manila Cathedral. Built in 1581, it was originally a parish church under the Archdiocese of Mexico. It’s undergone a few renovations, and draws in worshipers and visitors alike. The cathedral’s also been the site of 3 Papal visits to the capital. To see the best of Manila, consider booking a local tour. The people are incredibly friendly, warm and welcoming. It’s a good way to spend a few hours!

Stay at an affordable luxury hotel in Manila

Coming from Europe, I love staying in luxury hotels in South-east Asia. As well as being ridiculously affordable, the quality of a 3-star hotel is more akin to something you’d find in a 5-star place. In Manila, you’re spoiled for choice when it comes to luxury and boutique accommodation. A few excellent choices include Edsa Shangri-La, Pan Pacific Manila and Fairmont Makati.

However, my personal favorites for location, style and comfort are The Peninsula Manila and Nobu Hotel Manila. The 5-star Peninsula offers guests old-school charm in a setting guaranteed to make your trip a comfortable one.

With rooms ranging from Deluxe to Suites, you won’t be disappointed with a few nights here. Be sure to swing by The Peninsula Boutique to try some of the capital’s finest patisserie and handmade chocolates.

Following in the footsteps of its range of excellent Japanese restaurants, Nobu Hotel Manila is a dream to step into. Which is quite fitting, seeing as the hotel’s full name is ‘City of Dreams’!

Naturally, you can expect the same elegance and understated design you associate with the Nobu brand, along with plenty of fine dining. If you’re a fellow spa addict, be sure to book in some time at the Nobu Spa. They also use a range of premium natural products, that’ll leave you feeling rejuvenated and full of zen.

Ride some unique transport in Manila

While the traffic is a nightmare, getting around the city costs very little. If you want to experience the life of a local, try hopping on board a jeepney. These colorful open-door jeeps are cheap and a unique Filipino form of transport!

Some designs reflect the family name, or more commonly, that of a religious nature. A cross between a jeep and minibus, a short ride will set you around price of PHP7 (£0.10p; $0.02). The big downside to jeepneys for me, is the pollution. With no doors or windows on the vehicle, you get the full force of the Manila fumes. 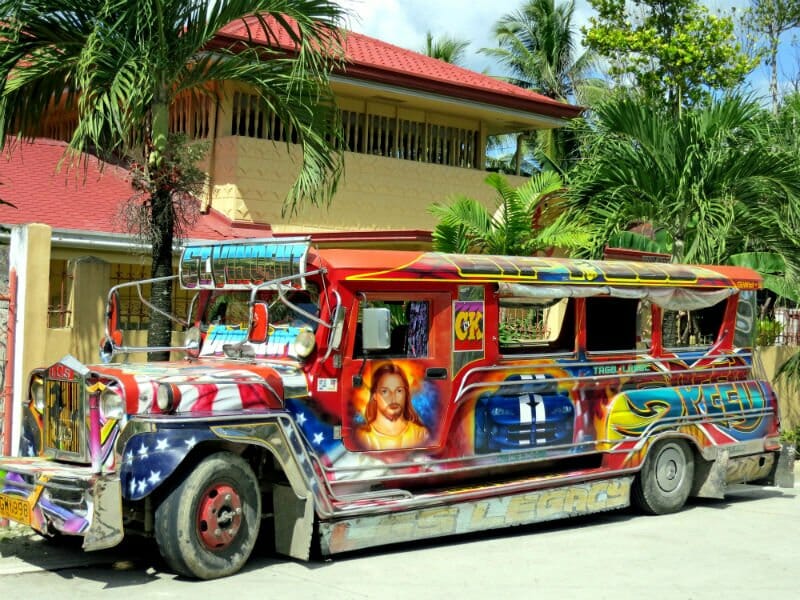 Off the main roads, you’ll also see small motorbikes with carriages attached. These are tricycles, and they take passengers on short distances only — no motorway rides for these guys! It costs even less to ride in one, and you’re sure to have a really rustic experience.

Other alternatives include the bus and the Light Rail Transit System, which only services the Metro Manila area. There are also FX cabs (an air-conditioned less brash version of the jeepney) and the yellow taxi cab.

The majority of Filipinos share a fondness for 2 things: food and shopping. Filipinos may not have the deepest pockets, but this has little bearing on their fondness for the malls.

Shopping malls rule the Manila landscape, from the monstrous Mall of Asia, to the upmarket Greenbelt in the business district of Makati.

I particularly enjoyed visiting a mall called Market! Market! It has an array of regional Filipino produce presented in a market stall style. It’s also close to the green area of Serendra in Bonifacio Global City.

It’s an area popular to expats, combining residential living with plenty of bars, restaurants and of course shopping.

Fill up your belly

Manila is one city that’s also cottoned on to the trend of fusion-style restaurants. Filipino cuisine isn’t as well known as neighboring countries in the region, so curious foodies will really have a taste experience. The cuisine has Spanish, Filipino and American influences, which is evident from the dishes. Take the dish Embutido. It’s Spanish in heritage, and is essentially a pork meatloaf with a boiled egg in the middle.

Mesa Filipino Moderne is one choice that offers fusion dining. Try their delicious appetizers, like Tawilis with mangga on a spoon (fried fish with mango). You may also want to sample the pomelo salad with latik (coconut milk residue) and salt crusted sea bass.

Abe Restaurant also offers distinctive dishes like mutton adobo (a soy sauce, vinegar and garlic based sauce) with popped garlic. For dessert, try the Chocolate Eh Fondue with fried suman. It’s glutinous rice wrapped in palm leaves, and is something different from the standard!

Get out at night

Even for travelers who aren’t big on nightclubs, I highly suggest checking out the bar scene. The drinks are flowing, the cocktails are potent, and the prices are low.

The main areas people tend to flock to include Makati, Bonifacio Global City and Pasay City. Here, you’ll find the Hard Rock Café as well as popular nightclubs like Prive and Opus Lounge. Even for those who don’t drink alcohol, the bar scene’s worth checking out, and is usually an unforgettable night.

I left Manila for Boracay with the feeling I’d really enjoyed my time in the city. If the government can clean up the city’s traffic problem, it’ll have no problems attracting visitors in the future.