A perfect weekend in Chicago

The ‘windy city’ or ‘Chi-Town’ is one of my favorite cities in the US. And, with just 2 days in Chicago to spend, we wanted to pack in as much as possible.

After an 8-hour flight from London, I arrived in Chicago’s O’Hare Airport with no polar vortex in sight. Like most places in spring, Chicago blooms under the spring sunshine. Full of promise in the air, it’s an ideal season for walking around and taking in the sights.

After surviving the long and tiring trek through US customs and immigration, I was happy to see the other side of the terminal building. I met some members of my extended family, and we wasted no time in heading to our first destination.

It might sound strange that the first thing we did in Chicago was to go shopping, but there’s good reason.

The Fashion Outlets of Chicago is around 10 minutes from the airport. It’s a mecca for designer as well as bargain shops. 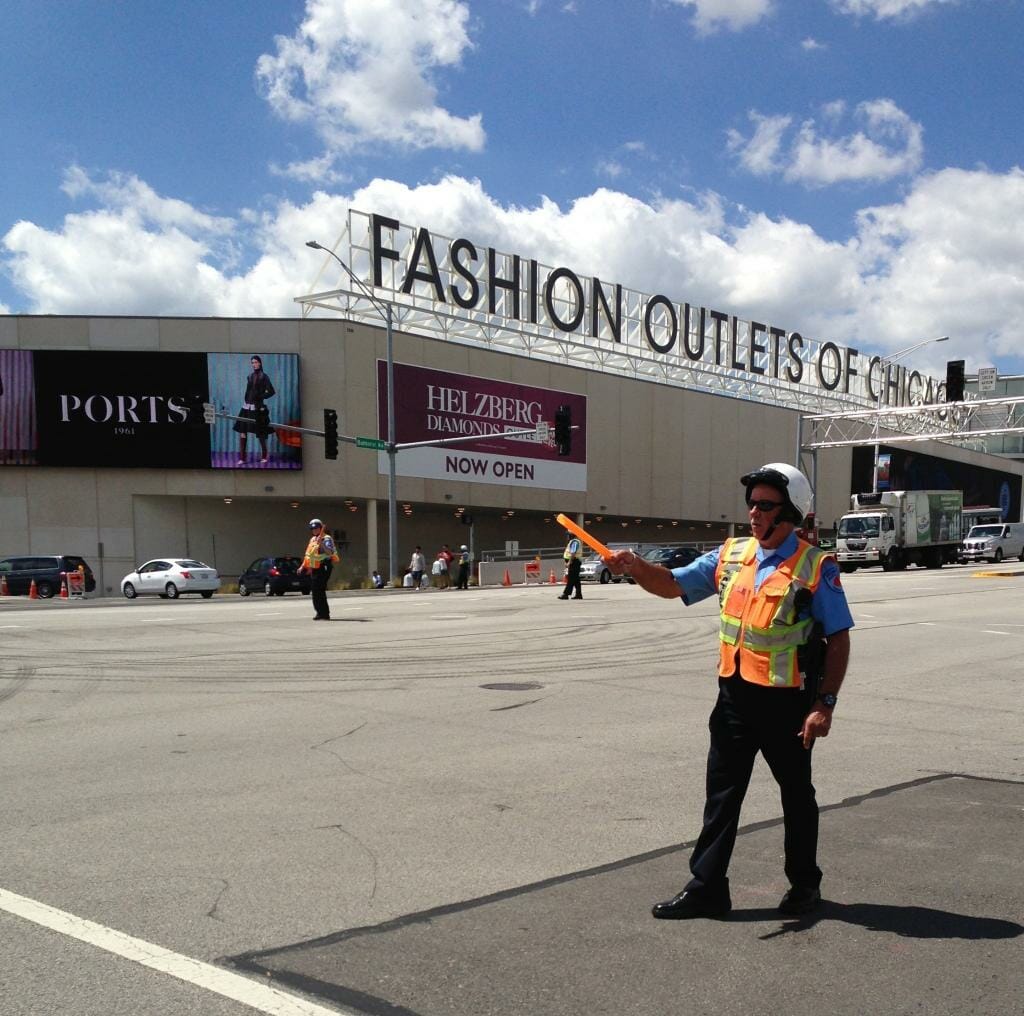 Despite my general feelings about shopping malls, I was pleasantly surprised once inside. The upper level caters to high-end designer stores like Gucci and Prada, while the lower level satisfies a more humble wallet.

Three hours and a few bargains later, we left Rosemont, and made our way to downtown Chicago.

It’s unthinkable to spend a weekend in Chicago without visiting Millennium Park. It’s not only famous for hosting outdoor concerts, but it’s also the home of the Cloud Gate sculpture.

More commonly known as ‘The Bean’ you can’t miss it given its size, shape and the number of tourists hovering around it.

Cloud Gate a.k.a The Bean 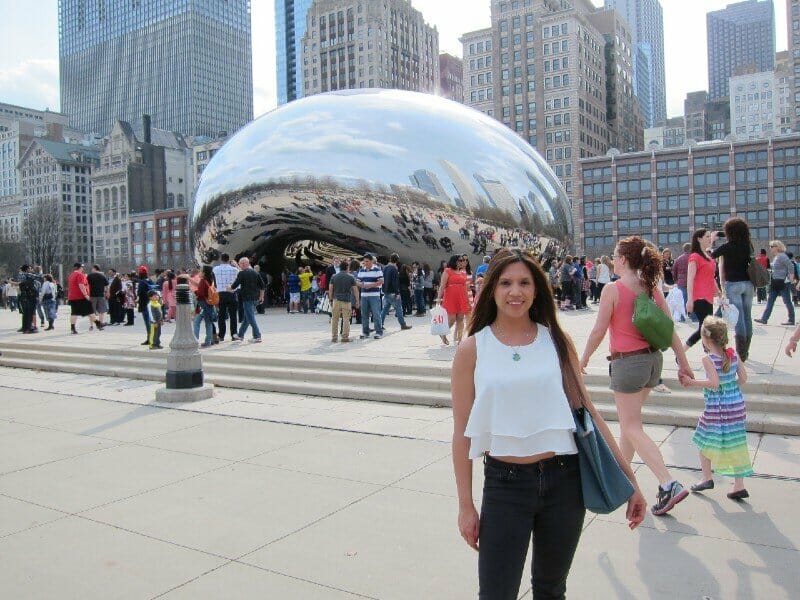 And another, with hoards of visitors

Stroll down the Magnificent Mile

While downtown, explore the streets and sights surrounding Michigan Avenue. The locals refer to it is as the Magnificent Mile, and it’s a name you’ll hear a lot when in Chicago.

The Magnificent Mile’s a main attraction for tourists for shopping as well as for visiting the city’s many skyscrapers. Grab a Chicago CityPASS® to see sights such as the observation deck at 360 Chicago and Skydeck at Willis Tower.

Head to the Magnificent Mile

A short walk away is the boarding spot for the Chicago river architecture cruise. It’s a relaxing way to see more of the city’s impressive structures, and learn about the history behind them.

If shopping’s not your thing, there’s another — and sandier — way to spend your 2 days in Chicago. North Avenue Beach is at the end of Michigan Avenue and a regular go-to spot for locals.

Because it’s a city beach, it’s very easy to get there by bus or taxi. Though the temperature wasn’t quite being bikini weather when I was there, it’s still a great place to relax and reflect.

The beach at the end of the Mile

After a family brunch at Four Seasons Chicago we worked off the calories with a walk around Lincoln Park. On a sunny day, the Lincoln Park neighborhood and park is one of the best places to enjoy being outdoors.

The Lincoln Park Zoo in the park is open all year round. Entry is free, and it’s a good place for a budget-friendly family day out.

Work off any calories at Lincoln Park

Have cocktails at The Whistler — 2 days in Chicago

Last stop on day 1 was to a local bar called The Whistler (2421 N. Milwaukee Avenue). It’s a bar, gallery, record label and live music venue, but the main attraction is their extensive cocktail list. I chose a TV Funhouse, a tantalizing taste-bud concoction of rum, bourbon, cereal milk, honey and cinnamon.

‘Chicagoans’ are always been unbelievably chilled, and the crowd at The Whistler only exemplifies this. A lively atmosphere, friendly crowd and a Mexican guy selling Tamales inside, The Whistler is a memorable way to end your night in Chicago.

Spend some time exploring a different, and less touristy, side of Chicago by visiting Wicker Park.

I fell in love with Wicker Park the first time I visited a few years ago. The independent boutique shops, and many bars and restaurants reinforce the area as a much-loved part of town.

Related post – Where to eat in West Randolph Street

The hipster side of the city — 2 days in Chicago

The neighborhood combines individual style with a sense of community. Wicker Park is known for being a little bit on the ‘hipster’ side, given its number of vintage and independent stores.

Personally, I think Wicker Park has an appealing character, and there’s enough to do here to easily pass a day. What’s more, you get to see another side to the city and see places where the locals frequent.

What to do in Wicker Park

Established in 1895, the ultra friendly staff is on hand to help and talk you through the beautiful selection of hats on offer. A charming shop front harking back to a past era, you’re purchasing an experience as much as a bespoke fedora.

A growling stomach brought me to the next spot in Wicker Park, Al’s Beef. Beef is big business in Chicago, and the thinly-sliced roasted beef drenched in its own juices in a sandwich bun is a mouth-watering treat.

Fun and retro: the Arcade Bar in Wicker Park

Next up, was a step back in time with a visit to the Arcade Bar. A venue that you can easily walk past without realizing what’s behind its doors, it’s a novel hangout for a bit of nostalgic fun.

On one side is a long bar offering beers and spirits. On the other lies endless amusement in the form of arcade and pinball machines such as Pacman and Tetris.

As night time fell, we moved to a nearby neighborhood called Logan Park. This quarter, just 2 metro stops from Damen to California, has a lot going on.

For dinner, we tried a German restaurant and beer hall called Das Radler. Reinforcing Chicago’s rich German heritage, the Radler’s surroundings were anything but. Mounted bicycles on the wall at the back, and contemporary Graffiti style prints give a modern edge to traditional Bavarian dining.

Rather than the traditional wurst, I chose the beer-battered perch with white beans and mussels. I followed this with a robust bourbon-based Shank’s Pony cocktail. Das Radler is ‘sehr gut’, and I can guarantee you won’t leave hungry or thirsty.

See Chicago from above

The last stop during our 2 days in Chicago was a night out at Apogee Lounge.

This rooftop bar with an Asian-inspired menu is a great way to end your time in the city. First-class American service, and delicious food and drinks, it’s the perfect and slightly tipsy way to end the trip.

Get around using the Chicago metro

With 2 days in Chicago, you don’t want to spend your time stuck in traffic. The fastest and cheapest way to head downtown — particularly during the rush hour — is the Chicago ‘L’.

Trains arrive every 2 to 3 minutes, and you can take some pleasure watching the traffic from the train. We took the blue line to Damen, the train station at the heart of Wicker Park. 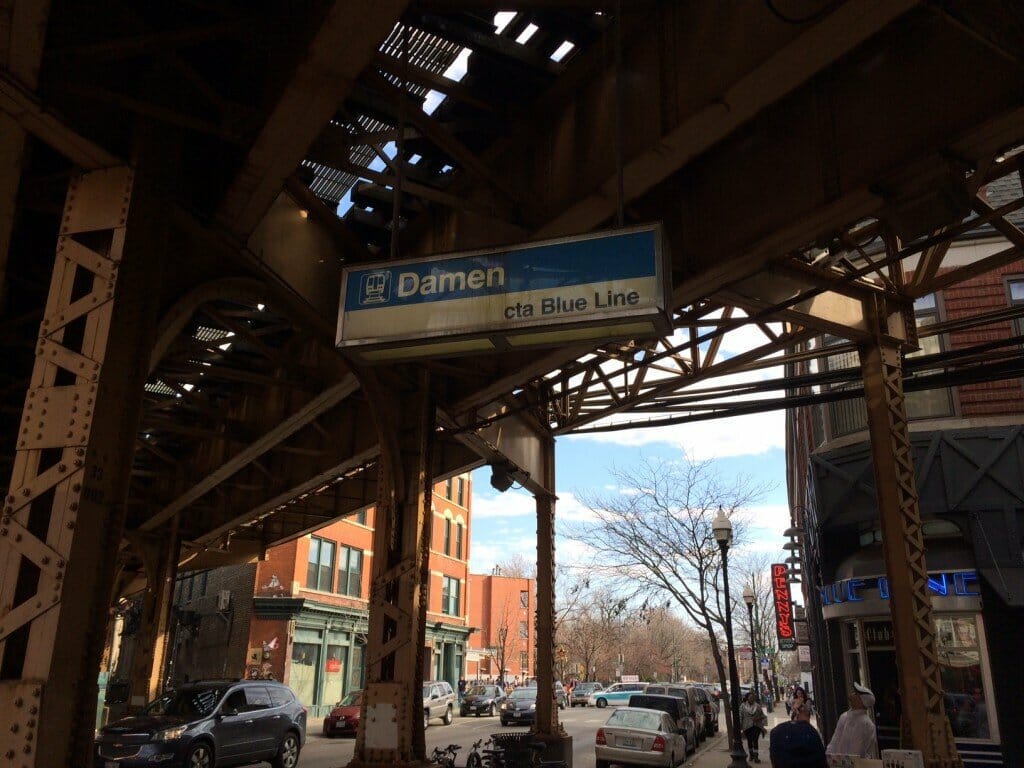 Where to stay in Chicago

I’ve 2 sound choices if you’re looking for boutique accommodation in Chicago. The first is the fabulous Thompson Chicago. This 4-star hotel is in the Gold Coast neighborhood, which is right near the Magnificent Mile. Its design is chic yet also homey, and if you’re lucky to get a lake-view room, you won’t be disappointed.

My second choice is The Robey in Wicker Park. It may not be downtown, but this Art Deco hotel’s a great place to stay when in Chicago.

The fabulous Robey in Wicker Park