What to expect from your first trip to Jakarta

I recently made my first trip to Jakarta in May. The only word that came to mind when I discovered I was going was, ‘okay’.

There are some cities in this world that would cause a sleepless night from the sheer excitement of visiting. Unfortunately, Jakarta isn’t one of them.

My travel buds were far from tickled on finding out I’d be in the Indonesian capital for a friend’s wedding. Despite being a city girl at heart, I much prefer traveling outside urban areas, particularly in South-east Asia. The experience has always been far more authentic and enriching.

The reaction of the friend (born and raised Indonesian) to me visiting did little to raise my hopes.

Me: we’re coming to Jakarta for the wedding!
Him: really? Why?!

He never really asked why, but looking back I’m sure it’s what he was thinking. The surprised tone of his voice started to make sense the second we arrived. As soon as we left Soekarno–Hatta International Airport, we entered the first round of Jakarta traffic. Suffice it to say, I’d hoped for a better welcome, especially after a 14-hour flight from London and a 2-hour transfer in Singapore.

Our hotel was based in Dharmawangsa Square and conveniently connected to a shopping mall. Away from the busy roads, it’s a quiet, green and residential part of Jakarta. The large gated homes give the impression of a semi-affluent neighbourhood. There are a few local restaurants that also looked promising (at least from the outside).

The jetlag and grogginess from the flight got the better of me, meaning dinner that night was at a local restaurant inside the mall. After trying a so-so version of the Indonesian national dish, Nasi Goreng, I headed straight to bed. 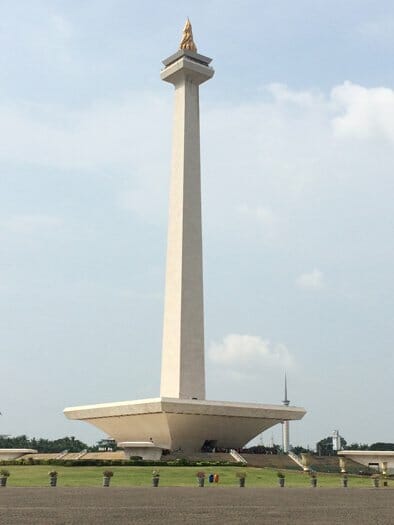 MONAS – look for the obelisk tower

First trip to Jakarta – What is there to do?

I’d advise avoiding the majority of Asian capitals, unless you have some kind of connection to the city, ie family or friends/celebratory purposes.

With a very short stay planned, I tried to be smart about managing my time – an almost impossible task in Jakarta. I set off wanting to see 3 sights: the National Monument (MONAS), the Istiqlal Mosque and Jakarta Cathedral.

The entrance to the National Monument beckons visitors with its pristinely mowed green laws, and colourful flower beds.

The grounds extend into a park of sorts, though not the type where you can bring a picnic (more botanical gardens). The tower, standing at 132 metres, was built to commemorate the struggle for Indonesian independence. Its symbolic significance impressed more than the structure itself – an obelisk-shaped tower with few defining features.

Photographers’ tip: shoot from afar to capture a better shot of the dome

You can see the top of the mosque’s grand circular dome while walking around the site of the National Monument. From afar it’s quite impressive.

For me, the most interesting characteristic about the mosque is its location almost opposite the Jakarta Cathedral. The Roman Catholic church was built around the end of the 19th century when the country was still under Dutch rule. It was last renovated in 2002 in a neo-Gothic style. The twin spires of the cathedral situated across a small footbridge from the mosque makes for a great photo.

And that concludes the highlights of my trip to Jakarta.

Wedding aside, there’s one very good reason why I didn’t get to see more of the city, and that’s the traffic.

To say that the traffic in Jakarta can be slightly off-putting is an understatement. Professor Stephen Whitehead wrote a brutally honest guest blog on his experience back in 2013. Now having experienced it for myself, I can see he wasn’t kidding. Believe everything you hear or read about the traffic situation, because it’s all true. 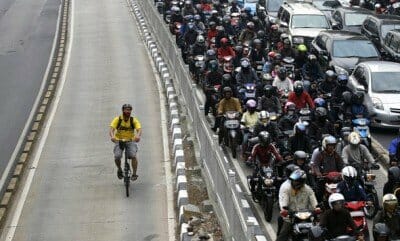 Blessed are those who choose cycling over driving

I’ve been in some horrendous traffic jams in my time in other Asian cities (Bangkok and Manila I’m talking to you), but Jakarta took the whole cakonutuffin.

Cars are really the only way to get around. Buses are available but will take even longer to reach a destination given the traffic. If you want a good taxi service, choose the Bluebird Taxi Group. You can spot them by the blue cars, and the drivers wearing distinctive blue shirts with printed bluebirds. They’re by far the cheapest – very handy when you’re stuck for 40 minutes between two close points.

Jakarta as a stopover visit

It won’t come as any surprise that I won’t be returning to Jakarta anytime soon. I’d only recommend it as a stopover visit for anyone curious to see it in person. If you’re thinking about going, try checking out the National Museum and Jakarta Old Town (Kota Tua Jakarta).

On a promising note, there are plans to build a metro extension in the financial centre. Only time will tell whether this will help to alleviate the city’s traffic problem, or simply add to the current chaos.