My first trip to the German capital exceeded any expectations I’d had before visiting. I not only explored a new city, but also learned how to party like a local in Berlin. Experiencing the energy and atmosphere of an electric city in 24 hours is something I’ll never forget.

B is for Berliners

When you hear the phrase ‘the city that never sleeps’, you probably think of New York City. While it’s true the American metropolis offers an endless range of nightlife to see you through to the morning, Berlin offers something extra.

First and foremost, Berlin is a city that caters to its residents, the ‘Berliners’. Visitors, foreigners and travelers take second place. It’s an aspect that becomes clearer the longer you stay. I also finally understood what my local friend meant when he said that ‘Berlin isn’t a city for travelers.’

Where to party like a true local in Berlin

It’s only when night falls that I opened my eyes to see the side of the city that never sleeps. If you want to enter the following places, I’d highly recommend befriending a local. You can try it solo, but entry’s more likely if you go with a few ‘Berliners’.

An elegant start before a messy end at Soho House, Berlin

I began my night out at the chic private members’ club/hotel Soho House (Torstraße 1). My friend just happens to be one of the bar managers, so you can just imagine how good my evening began! Bespoke cocktails taste even better when sitting on a velvet chaise lounge, while admiring the rooftop view overlooking Mitte.

The main event however didn’t kick off until after 4am. Like many other places in Europe, Berliners start the party late, very late! Bleary-eyed and ready to raise the white flag, my friends were adamant on showing me the places that only Berliners know about. We went to the first bar only to find it was closing, but my friends weren’t worried.

The only thing they were concerned about, was whether the good places were about to close.

The first place we went to was Crack Bellmer (Revalerstr.99, 10247). At first glance, it looks like any regular abandoned building, just with painted murals on the brick exterior. Inside however is a different story: a DJ playing soulful beats, and its patrons just chilling out and enjoying the atmosphere.

Crack Bellmer is edgy and retro and if truth be told, a little bit hipster. An upstairs attic-like area is filled with old furniture and discarded objects perfect for a car boot sale. Weirdly enough, this only added to the understated charm of the place. There’s a feeling that everyone – even non-Berliners – are welcome, and that always sits well with me.

One downside for me during my visit, was that you could still smoke indoors. While this  might make smokers happy, it’s bad news for us that don’t. Some places have separate smoking rooms, but the majority of places I visited didn’t.

I’d wrongly assumed that Germany, like neighboring European countries, had banned smoking in public spaces. At the time of my visit, it was evident that you could smoke everywhere. I found it unpleasant, and after a long night, was fed up of my entire body, hair and clothes stinking of smoke.

We were kicked out of Crack Bellmer around 5.45am, but the night/morning wasn’t over. Instead we pulled up to popular local nightclub Watergate (Falckensteinstr. 49 10997 Berlin). The club’s another nondescript looking building, but with a thumping and lively ambience inside.

Watergate’s known for being notoriously selective, but girls are more likely to get in. Despite my friend’s attempts to get us in, the obnoxious lady with the clipboard (you know the one) told us outrightly ‘no’.

If you do want to try your luck at getting in, arrive in a group with a balanced gender ratio, or get on the guest list. If that fails, try the following place; you won’t be disappointed.

The final bar of the evening/morning was Mein Haus am See (Brunnenstraße 197-198). Wonderfully kitsch, it’s filled with raggedy old sofas and elevated seating.

At past 6am in the morning, it was unsurprisingly empty, apart from a few partygoers lingering inside. Everyone seemed to be none the wiser, or cared, that daylight was just around the corner.

We stayed for the next few hours, chilling on the retro sofas, re-visiting the 24-hour bar, until it eventually became a coffee place for the morning crowd.

Reflections on partying in Berlin

My first trip to Berlin was a brilliant and colourful eye-opener to the city. I’ll never forget the capital’s individual charm nor love for its own people, the ‘Berliners’.

I awoke the next afternoon looking like something out of a Japanese horror film, but with no regrets. My night in Berlin is one experience I’ll take to my death bed, it was that good! And if that’s what a good memory is supposed to be, then I’ll be happy to rock the horror look a bit more often.

Butchers cocktail bar and speakeasy: An underground converted slaughterhouse with an entrance through an English telephone box at the back of a Currywurst shop (Torstraße 116 (Rosenthaler Strasse – Now closed) 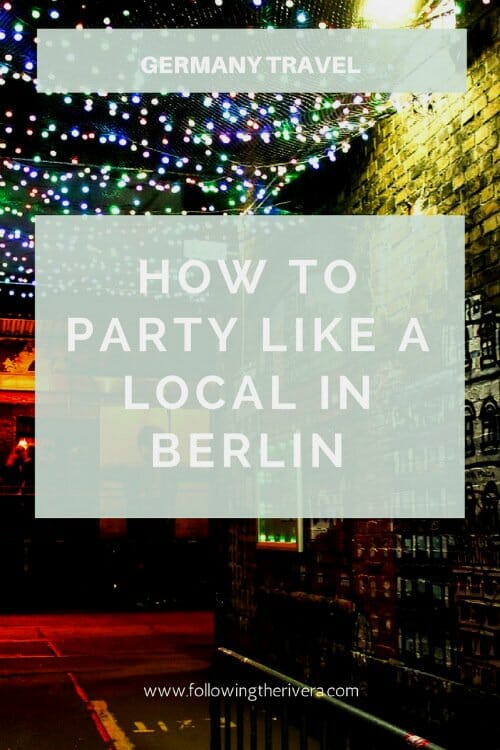