A road trip around Italy — from Sicily to Perugia 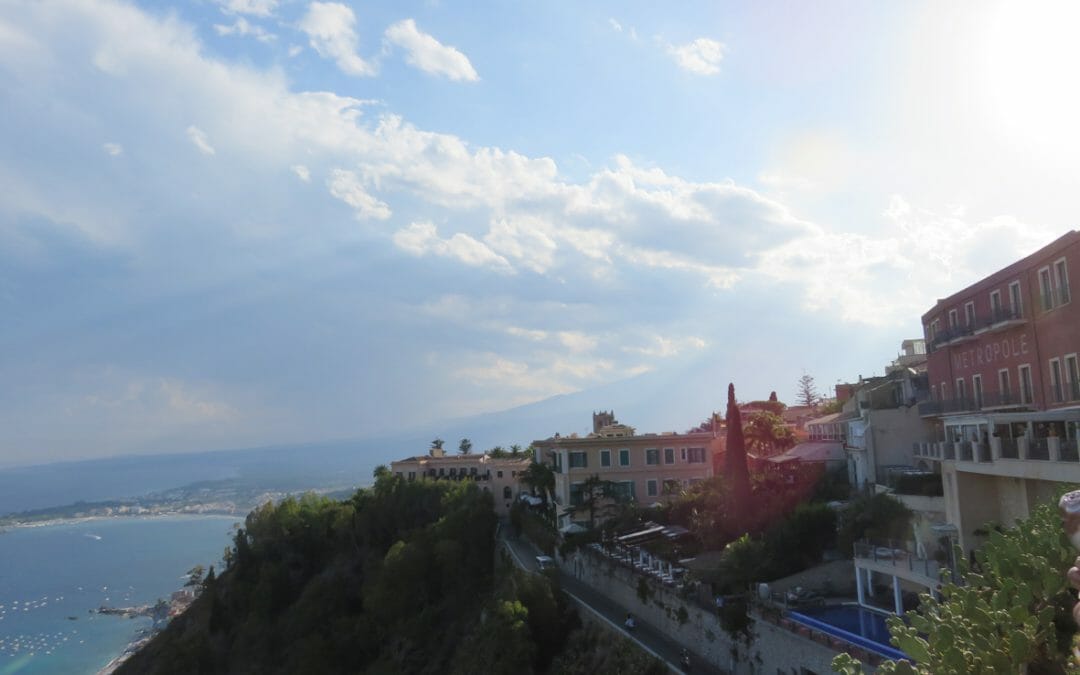 I was 19 years old when I took my first road trip around the United States. Starting from Chicago, we headed to Florida, then to New York, and eventually back to Chicago. Knowing little about the states, towns and cities we were driving through added to the awe and mystery of the adventure. The trip was a defining travel moment for me: passing through large areas of land, and experiencing ‘life on the road’.

Italy was one place where I’d always wanted to repeat my US road trip adventure. A long-time fascination of exploring the ‘boot-shaped’ country became a reality as I finally made the trip. 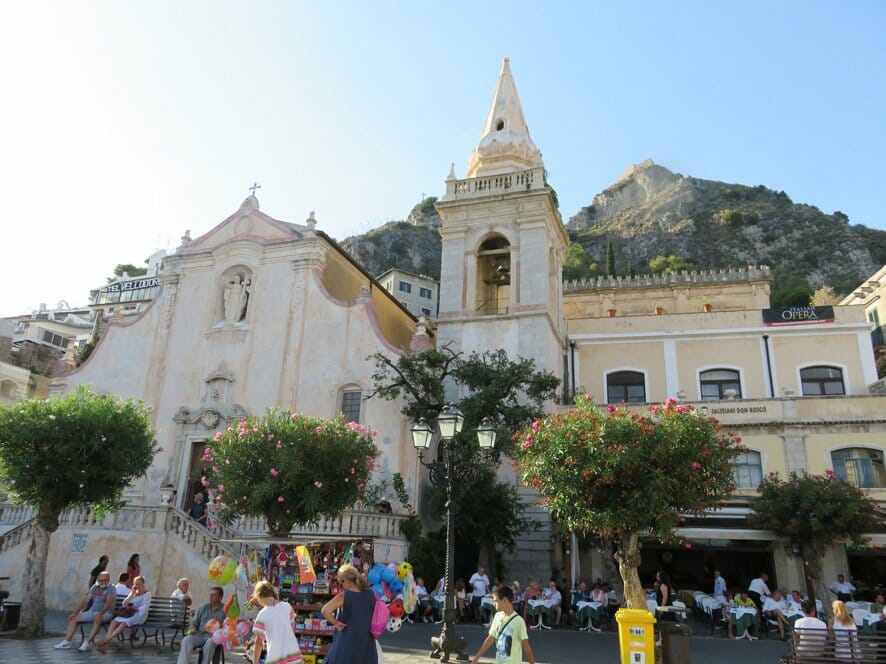 Sicily is an interesting island for so many reasons. Though close to the Italian mainland, being on the island can sometimes feel like another country. On the surface, it’s the typical Mediterranean island — good weather, food, beaches etc. There are however notable differences from their northern counterparts. Sicilians have their own dialect, as well as a more relaxed attitude — to pretty much everything. Locals are welcoming, but their seemingly tougher outer exterior makes it harder to befriend them. If truth be told, I found that traveling with an Italian, better yet a Sicilian, made my experience far easier.

I stayed on the north-east coast of the island, in a residential coastal town called Santa Teresa di Riva. Located in the province of Messina, it’s smaller and more personal than its province’s namesake larger city. Many of Sicily’s shores are stony rather than sandy, but don’t let that put you off. High temperatures in August (28°C/82°F to 32°C/90°F) make a few stones a small price to pay for the warm and clean waters. The majority of tourists I met in the town were other holidaying Sicilians, many from Palermo.

What to eat in Sicily

While Italy in general, has a reputation for its delicious cuisine, for me, Sicily holds the title for food utopia. Flavorful fruits, perfectly ripe vegetables, and not forgetting the abundance of fresh fish and seafood available daily. Homemade gelato in a fluffy buttery brioche bun is a must, as is the traditional Granita typically eaten at breakfast. 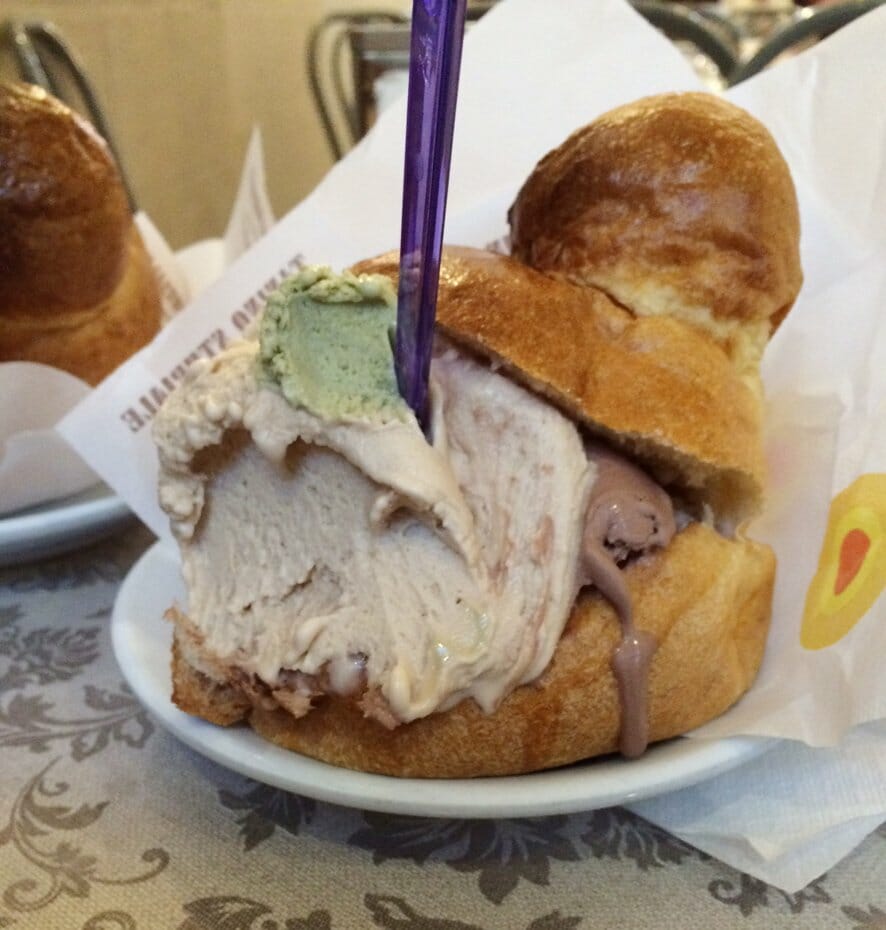 The icy dessert is available in several flavors (strawberry, coffee, lemon etc) and usually served with fresh cream on top. If the sound of fresh cream is too heavy to start your day, you can ask for one ‘senza panna’ (without). Having tried several places in the area for Granita, I can say that Bar Mimmo is the best. They also sell other desserts, eg giant profiteroles, so I advise wearing something loose!

To sample some of the freshest seafood around, get yourself to Aloha Mare. This seafood haunt always has long queues in summer, given its range of mouthwatering dishes.
Related post – Best Sicily day trips from every part of the island

I recommend Santa Teresa di Riva if you’re looking for a more local experience, and prefer to stay clear of tourists. If, however, you want to follow the crowds, there’s one place you have to visit.

The hilltop historic town of Taormina is extremely popular – and for good reason. Taormina has great views overlooking the Ionian Sea, plenty of bars, cafes and restaurants, and the Greek amphitheatre. I didn’t enter the theater but instead took enjoyment in a much simpler, and not to mention cheaper activities

Small ‘sorbeto’ in hand, I spent time taking in the Greco-Roman architecture found in many historic churches and on shop fronts. Other points of interest on the way to Taormina include Isola Bella. This enchanting isolated island has a narrow path that connects to the beach.

Italy road trip: The side streets of Taormina

Traveler tip: Isola Bella gets very busy, so arrive earlier rather than later. This is particularly important if you want to get a parking space.

If the name Catania rings a bell, it may have something to do with its renowned mafia presence. Having said this, the Sicilian city’s absolutely worth a visit — if only a short one. During my stay, the police presence (with guns), didn’t detract from the fact that Catania is an incredibly beautiful city.

When you hit the main piazza, one of the first buildings you see is La Cattedrale di Sant’Agata (Catania Cathedral). The Catholic Church was rebuilt in a grand Baroque style after several earthquakes and volcanic eruptions from Mount Etna.

It’s one of many historic churches to see in Catania, and I’d suggest spending a little longer if your itinerary allows. Above all, Catania is a key stop on this Italy road trip itinerary. 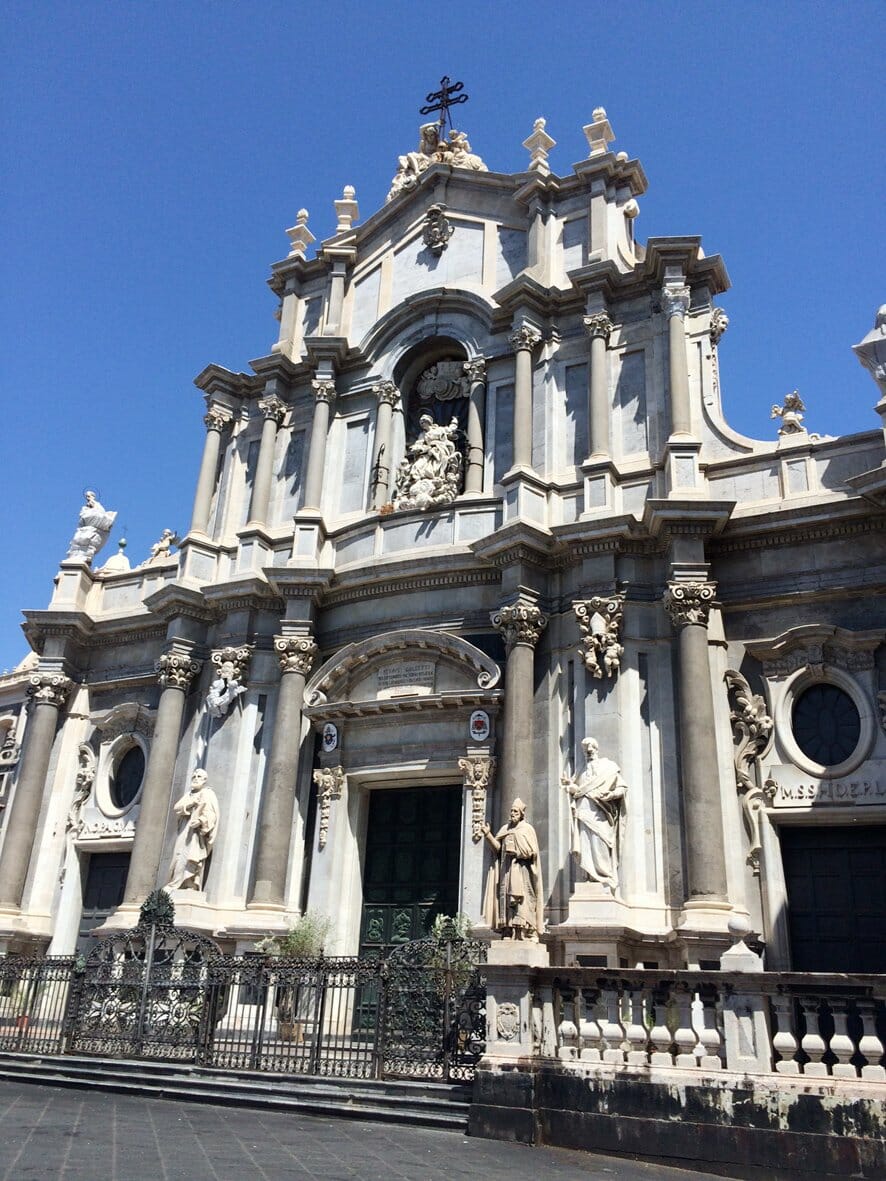 Catania is also home to the original and incredibly moreish Arancini, a.k.a. stuffed rice balls. Etoile D’Or serves up the best Ragu-filled Arancini as well as the popular sweet ricotta-filled mini Canolo. Small in size, it leaves plenty of room to try other flavors.

Renting a car is usually a pain-free process. You book (and pay) online, and turn up at the collection point on the day of travel. This isn’t the case however in Sicily.

We turned up at Catania Airport to find that our car hadn’t arrived, despite booking online 5 days before. Traveling with an Italian carries some weight, but the experience was just as arduous. Lesson learned? Don’t expect too much — anything good that happens will be a welcome surprise.

Boarding the ferry at Messina

There’s only one way to reach the mainland of Italy by car, and continue your Italy road trip, and that’s by ferry. Messina is the 3rd largest city on the island, but is far different from the houses and buildings you see in other coastal towns.

Be prepared for long waiting times and queues on entering the port. If you don’t have a ticket, you’ll need to jump out of the car and scramble along with everyone else to get one.

If there’s one thing I learned from being in the south, it’s to do as the southerners do. This means spotting gaps in the queue and jumping ahead of others. This applies to buying tickets for the ferry as well as for the bathroom!

Approximately 6 hours later after arriving in Reggio Calabria, we arrived in the historical town of Lecce. Lecce to Sicily is a lengthy one, but very scenic. Situated in the southern region of Puglia, the city was buzzing with life, despite being past midnight when we arrived.

Old buildings and churches built in Baroque architectural style seem to be around every corner in this small, yet impressive city. At night, the lights from the bars and restaurants act like a beacon to help people find their way around.
Related post – Where to find Sicilian Baroque architecture in Noto

History meets modernity with the many eateries lining the main roads and smaller side streets. Devouring a platter of local ham, homemade bread and a glass of wine at 12.30am is highly encouraged. 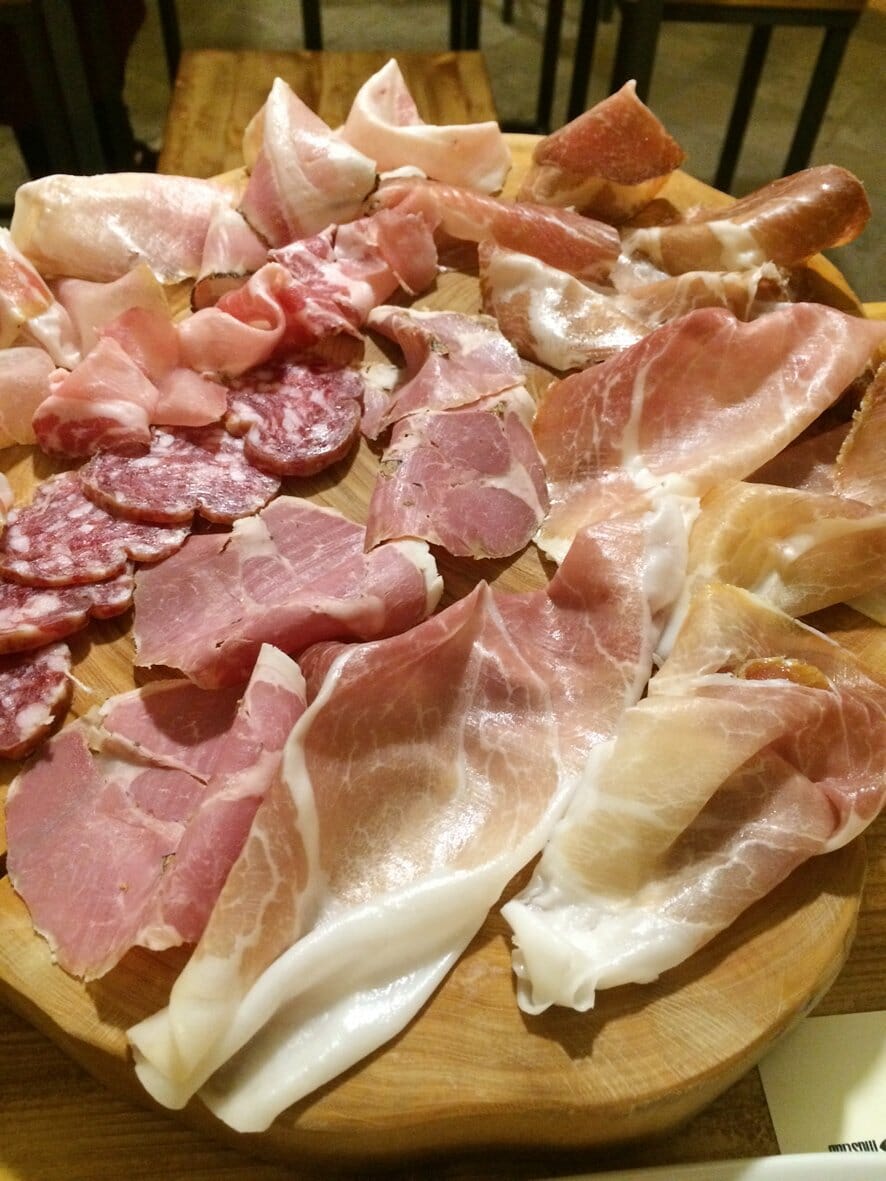 The next day and a couple of hours drive later, we stopped for lunch at the seaport town of Trani. Also located in Puglia, the August summer sunshine created the perfect backdrop for some leisurely al fresco dining. One of the highlights of Trani is the old fort overlooking the sea, which has been restored for the public. The manicured gardens and pebble paths leading to the seafront are a peaceful prelude before hitting the road. For lunch, we ate a local dish called Riso Patate e Cozze (rice and potatoes with fresh mussels). While tasty, it was still no match for the delectable plumper mussels I’d eaten in Sicily. 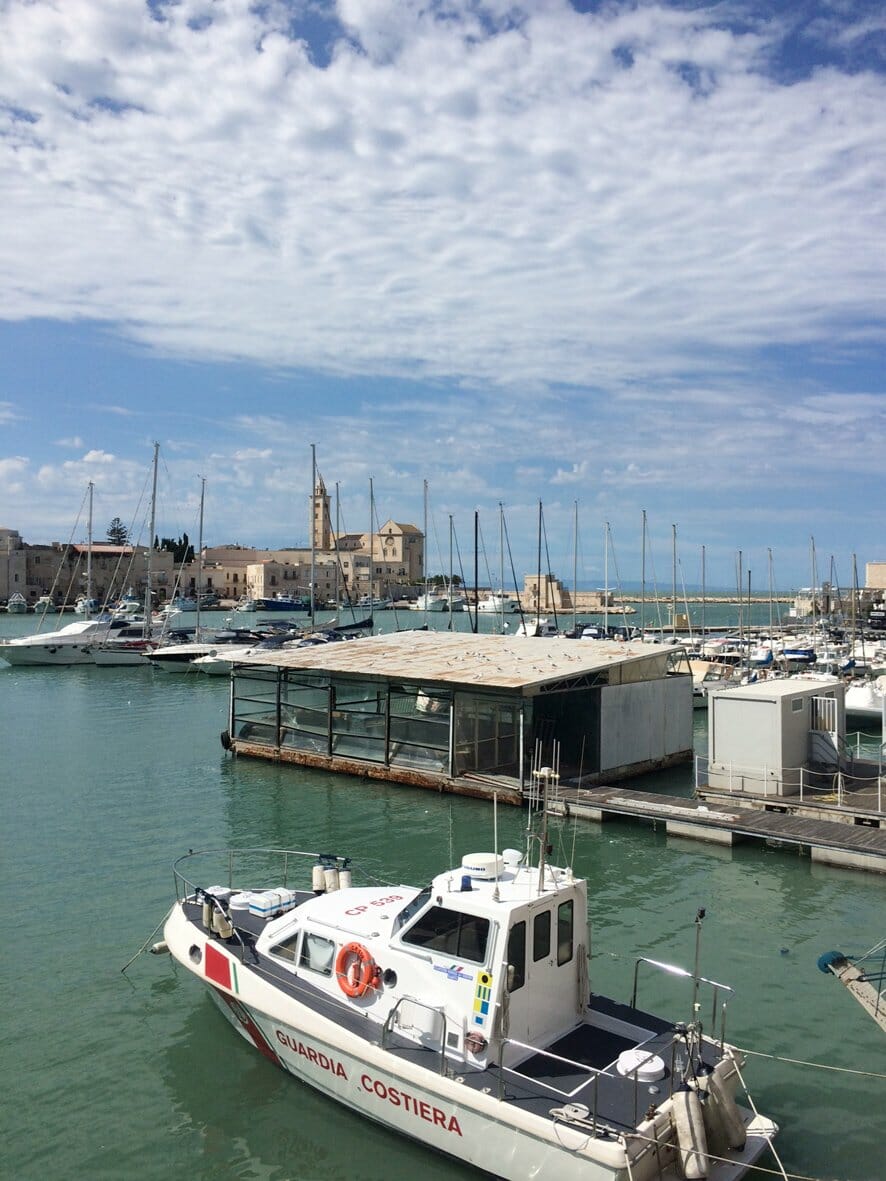 Map me: all the stops on our Italy road trip

We drove into Umbria late afternoon/early evening with a glorious golden sunset descending upon the green hills. Driving into the heart of Italy, like a child, I counted the number of castles we passed along the way. I was most impressed by, though a very distant view, of the grand, medieval castle of Rocca Maggiore. A strong evocation of Italy’s past, the scenery made the long car journey more enjoyable.

We arrived in Perugia at night, and to a far different scene from our arrival in Lecce. The city’s a traditional university town, meaning that come August, there’s noticeably fewer people. The main hub of activity, created by the thousands of students, resumes when the new term begins in September/October. August is also noticeably cooler at night time than in the south (higher altitude), so take a light jacket/sweater for evenings out.

What to see in Perugia

Signs of medieval architecture are everywhere. At the heart of the city is the wonderful 13th century constructed Palazzo del Priori. Previously the old civic palace, it’s now home to the city’s administrative headquarters. If driving, note that there is no parking inside Perugia’s narrow street city centre. Head instead to the main underground car park. From there you can easily access the city’s hilltop town centre via the escalators.

Once you step off the escalators, you enter the main square, Piazza IV Novembre. You’d be hard pressed to miss the main attraction of the grand fountain, Fontana Maggiore, and the stone sculptures on the basin.

With or without the presence of the students, Perugia’s charm is alluring on its own merit. An abundance of Baroque Roman architecture, intertwining streets and Perugina Baci chocolates, this city truly is a must see.

Continue to part two of our Italy road trip where we continue the journey from Siena to Veneto. 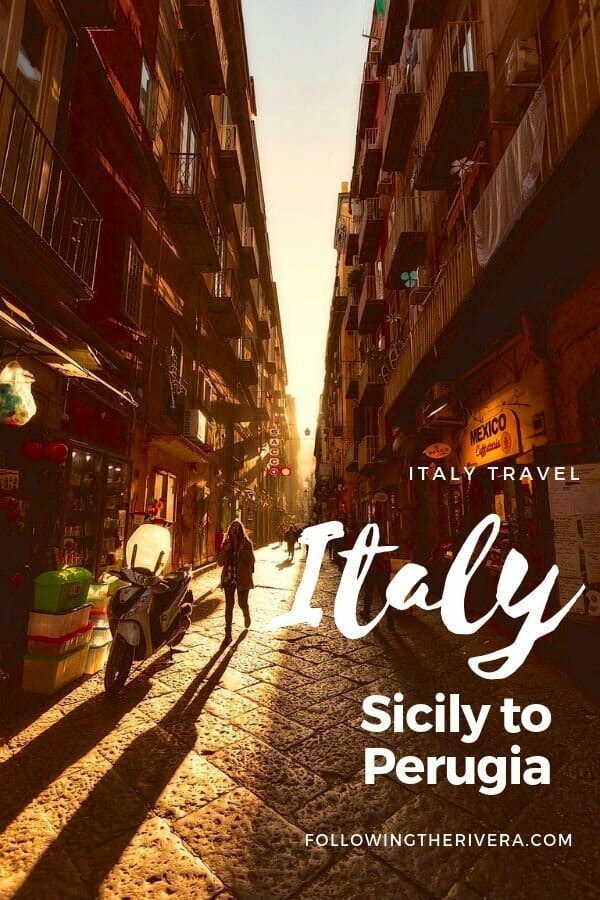