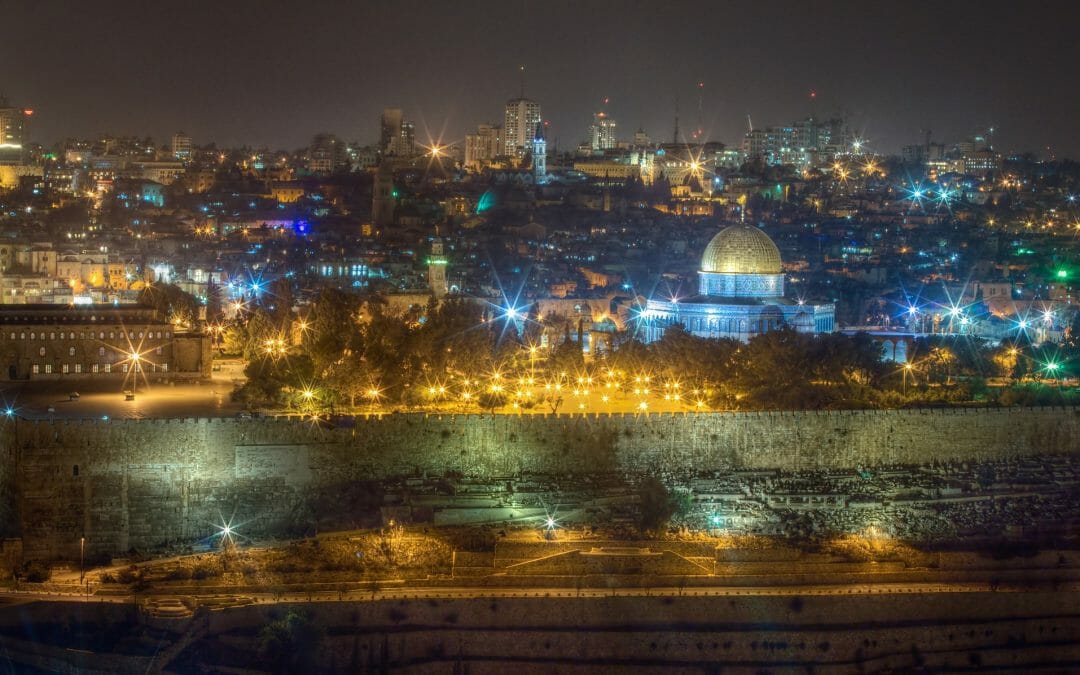 Jerusalem’s a city filled with must-see historic sites, but it can be tricky knowing where to start. It’s one of those places where it doesn’t matter if you’ve zero knowledge.

In fact, it probably works to your advantage as the city’s history is so rich and detailed. What’s more, you’ll also learn the history firsthand from the experts that know it best.

It’s normal to think that in one of the most holiest cities, you’ll only come across ‘Jesus’ stuff. However, you’d be hugely mistaken as Jerusalem is historic, but it’s also modern.

Whether you’re religious or not makes no difference in Jerusalem. The following historic sites are awe-inspiring, grandiose and worth bustling your way through the crowds for.

1. The Tower of David — historic sites in Jerusalem

The Tower of David is an ancient citadel at the edge of the Old City in Jerusalem. From its exterior alone, you can immediately tell it’s a historical asset of great significance.

In addition, it’s a medieval fortress with architectural traces from several periods including the Byzantine and early Muslim periods. The citadel also contains important archaeological relics dating back over 2,000 years.

The site’s also home to the Tower of David Museum, which contains 4,000 years of Jerusalem’s history.

Check the website for the most up-to-date information on ticket prices and opening times. For a mind-blowing experience, I’d urge you to also book for the night spectacular.

The Tower of David becomes a sound and light extravaganza, teaching guests about its rich history at the same time.

2. Church of the Holy Sepulchre

The Church of the Holy Sepulchre in Jerusalem is considered one of the holiest Christian sites in the world. This is because it’s said to be the place where Jesus Christ was crucified.

The church is carefully divided between Christian denominations that protectively guard their areas. The Greek Orthodox has the largest area in the church and share custody with Roman Catholics and the Armenian Apostolic.

When entering the grand doors of the church, you immediately see the Stone of Unction ahead of you.

The limestone slab, dating from 1808, marks the preparation of Jesus’ body for burial. The Armenians, Coptic Orthodox, Greeks and Latins contributed the white lamps that hang over the stone slab.

Probably the most moving sight in the Church of the Holy Sepulchre is the tomb of Jesus. The Edicule (the tomb) is covered by a flat roof with a small dome at its center and narrow columns for support.

Be prepared for a long line to enter the tomb of Jesus. It’s the main attraction at the church, and if it’s something you’d like to see, come early.

As a non-practicing Catholic, I’ve to admit, I was very moved by my visit here. The energy and spirit of the church, even with the crowds of people, is something I’ll never forget.

“The church is carefully divided between Christian denominations that jealously guard their areas.”

To see the site of ancient Jerusalem, you need to go to the City of David. Its beginnings date back to the Early Bronze Age (1850 BC).

It’s the same place from the Bible where David established the capital of ancient Israel. The City of David was also the seat of rule for the Davidic dynasty for centuries. Today, it’s home to a mixed Jewish-Arab neighborhood.

The City of David is outside the walls of the Old City of Jerusalem. It’s approximately a 4-minute walk from the Western Wall.

This historic place is the most excavated archeological site in Israel.

In fact, there have been more than 19 archeological delegations that have excavated in the City of David since 1867. These teams have come from England, France, Germany, the US and Israel.

Though the City of David is the most excavated archeological site in Israel, to date, only 20% has been uncovered.

One of the most important discoveries was the Canaanite Water System, which dates back to the 18th century BC.

The water system’s a series of underground passages and fortifications, that the ancient Canaanites used to access the city’s primary water source.

If you’re interested in visiting the City of David, taking a tour is an excellent way to explore the site.

You’ll get to see the ancient city and with your very own expert guide.

Temple Mount is a steep hill in the Old City of Jerusalem. It’s also one of the most religious sites in Christianity, Judaism and Islam.

You can also see the 4 minarets — architectural structures similar to a tower — adjacent to the mosque.

The golden-domed Dome of the Rock is a UNESCO World Heritage Site and has been called ‘Jerusalem’s most recognizable landmark’.

Holiest places in the world — historic sites in Jerusalem

The Al-Aqsa mosque is the third holiest site in Sunni Islam.

Muslims believe that it’s the place where Muhammad was taken from the Sacred Mosque in Mecca to Al-Aqsa in Jerusalem.

“You can also see the 4 minarets — architectural structures similar to a tower — adjacent to the mosque.”

Visitors can reach Temple Mount through 11 gates. However, please note that 10 gates are only for Muslims and 1 is for non-Muslims.

The Western Wall is an ancient limestone wall in the Old City of Jerusalem. It’s also known as the ‘Wailing Wall’, or ‘Kotel’ in Hebrew.

The wall’s extremely holy for the Jewish people because of its connection to Temple Mount.

Probably the holiest site in the Jewish faith lies behind the Western Wall. The Foundation Stone is the name of the rock at the center of the Dome of the Rock.

Many Jewish people regard the Foundation Stone as the Holy of the Holies — the spiritual junction between heaven and earth. Therefore, it’s the direction that all Jews should face when praying.

If you want, you can write — and leave — prayer notes in any of the crevices in the wall. It’s a beautiful practice, made more spiritual by the surroundings of the Old City.

The lines to visit the Western Wall build up quickly, so arriving early is the best way to avoid this.

The holy land of Israel has more historic sites to visit; you just need to know where to find them. 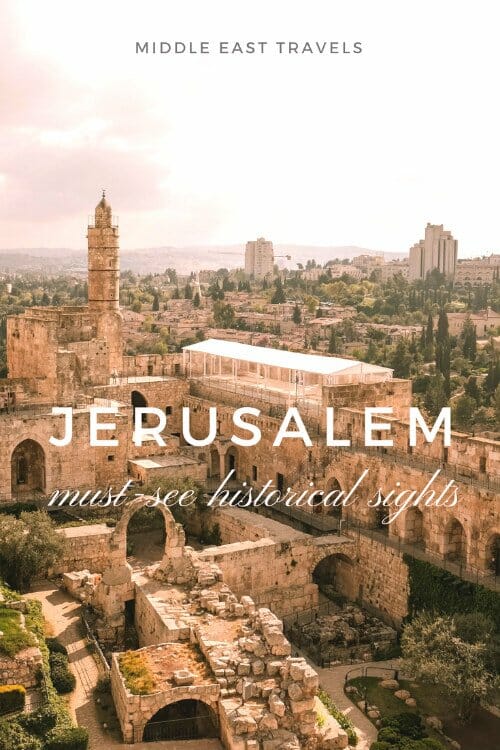 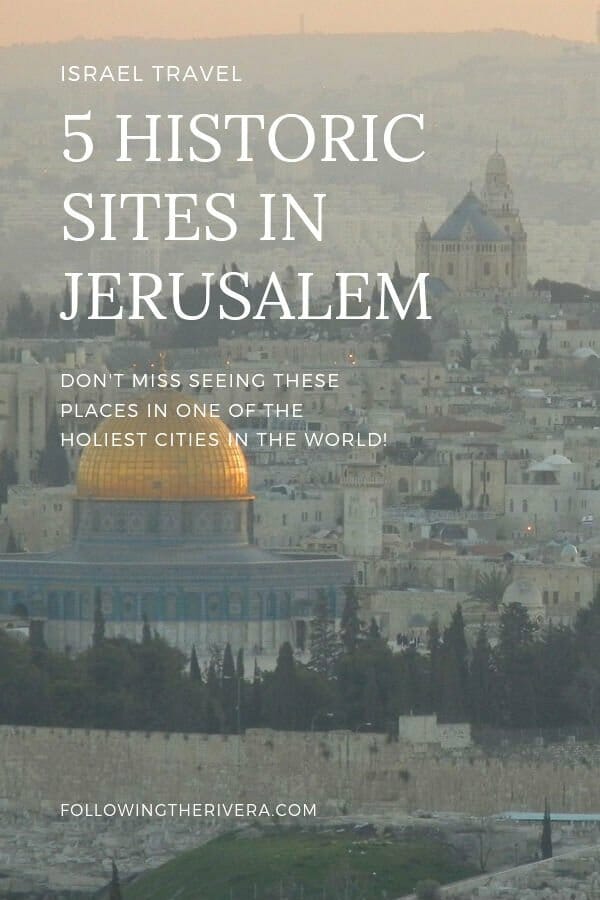 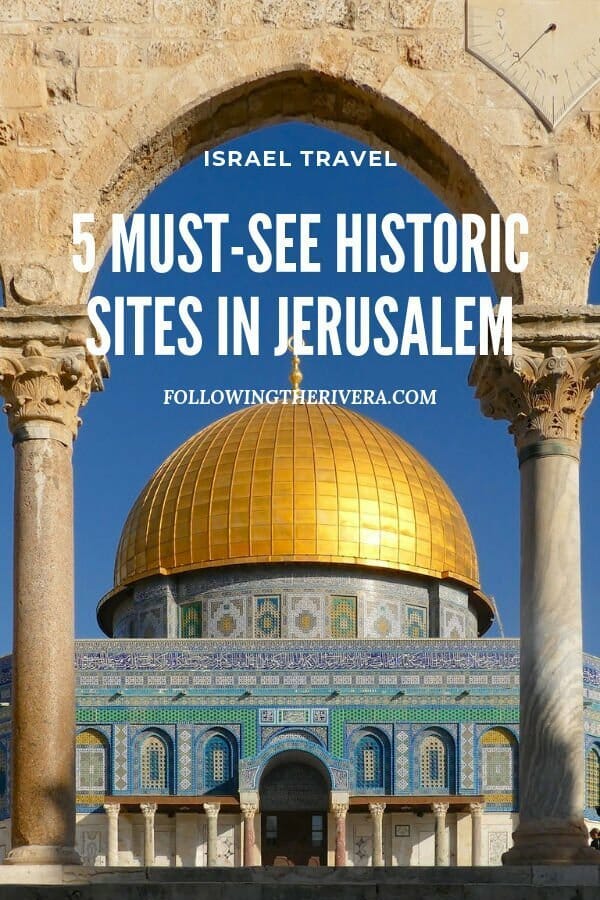