Things to do in Noto: 5 reasons to visit in May 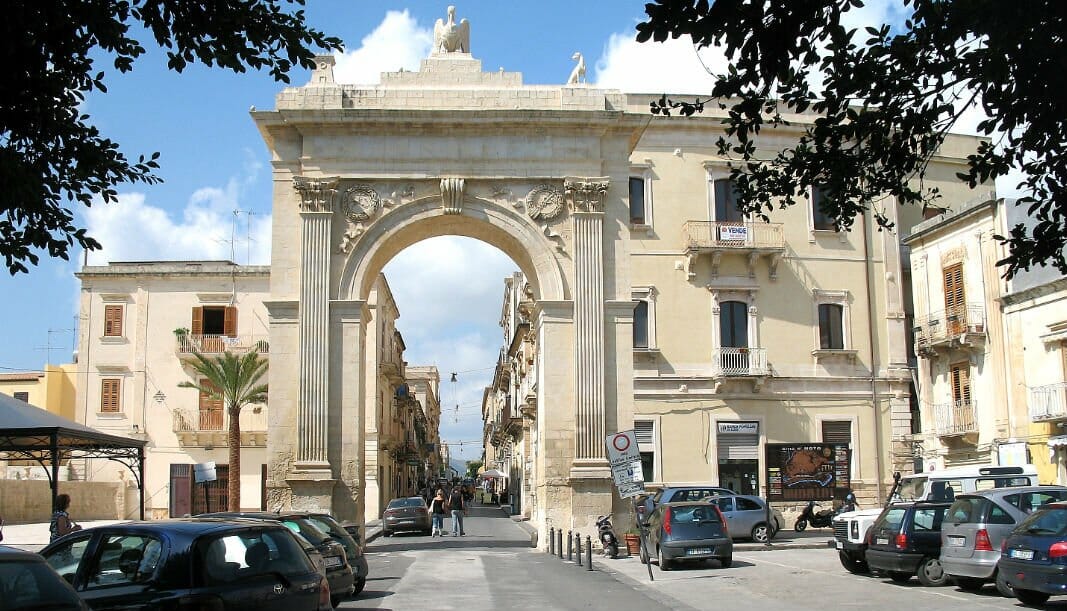 5 reasons why you should visit Noto in May

What to see in Noto, Sicily

The Sicilian town of Noto is located in the south of Sicily. It’s part of the province of Siracusa, and a good base to visit the equally beautiful Ragusa and Modica.

Noto’s historic center may be small in size, but there’s plenty of things to do and see.

May is a great time to visit, and for 5 reasons that I’ll outline in this post. My hope is that by the end, I’ll have convinced you to add Noto to the itinerary.

Related post – A road trip around Italy – from Sicily to Perugia

1. Immerse yourself in the history — what to see in Noto

Noto has undergone many different influences before becoming the place it is today. The Arabs conquered the city in 866, where Noto was even the capital at one point.

Their reign ended when the Christians took over Sicily, changing the landscape, and religion too.

It may sound obvious, but having good weather when traveling makes a big difference. And in Noto, it’s usually sunny for approximately 9 months of the year. Feeling the sun on your face is a dream, especially when you’re used to a northern European climate.

Average temperatures in Noto in May range from 25° during the day, to 15° at night. It can get hot in May, meaning high factor sunscreen and a good sunhat is a must. However, compared to summer, May’s more bearable, and you’re also less likely to need 2 showers every day.

3. Noto historic center — what to see in Noto

Though Noto is more than just the city center, it’s really the hub where everything happens. If arriving by car, be prepared to drive into some of the narrowest streets around.

Parking is very tight, so you may want to think twice about hiring that SUV. Sloped streets and cobbled roads also create a challenge for any female travelers wanting to wear heels.

Good walking shoes are a must, because you’ll be walking a lot, plus there are many sloping streets. If you want to know the real Noto, you may want to consider booking a tour. It’s a fun way to see the city, and also with your very own local guide.

“Seven Rooms Villadorata is the next best thing to staying in the Villadorata Palace.”
FOLLOWING THE RIVERA

4. Noto architecture — what to see in Noto

Noto’s historic center is a mecca for buildings in the style of Sicilian Baroque. Its cathedral is incredibly beautiful, and will leave you speechless when you first set sights on it.

After the earthquake hit Noto in 1693, the cathedral underwent many repairs, mainly to the cathedral’s roof. Unfortunately, it collapsed again in 1996, and didn’t reopen till 2007. In fact, if you observe closely enough, it’s something evident when you compare the interior walls to the roof.

Noto Cathedral is also — hands down — one of the most impressive cathedrals I’ve ever seen in Italy. The cathedral’s façade takes on the style of Sicilian Baroque, with an exterior of pale yellow limestone.

The grand doorways are revivals of 15th century architecture, and the façade, resembles the style of the Notre-Dame in Versailles. 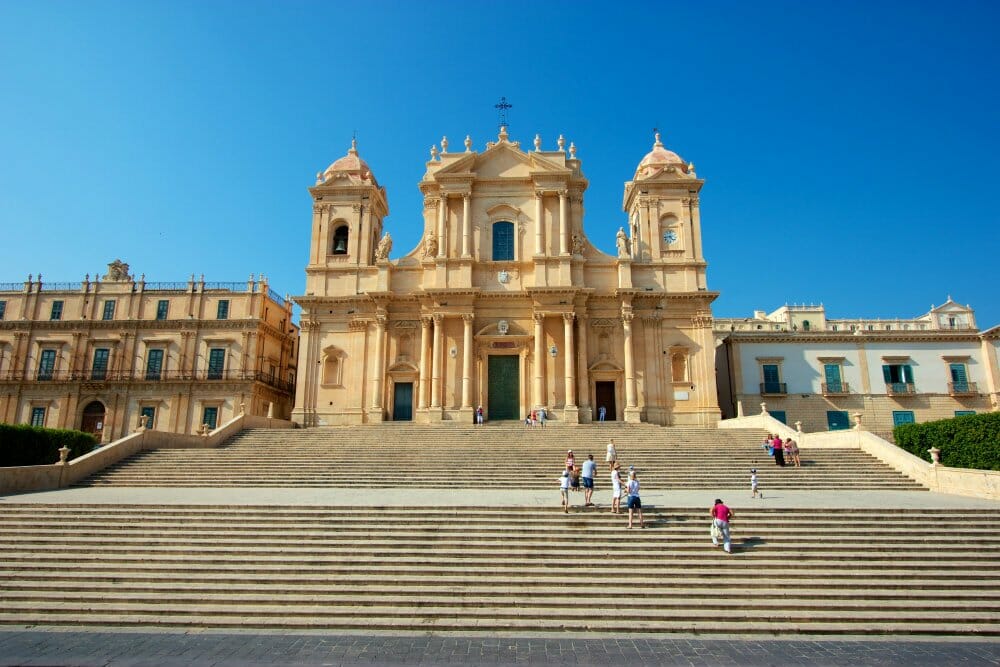 5. Infiorata di Noto — what to see in Noto

A very good reason to visit in May is the colorful Infiorata di Noto. This annual festival usually takes place in the last week of May in the historic center on Via Nicolaci.

The festival began as an idea over 20 years ago, by artists from Noto and Genzano, a commune in Rome. Designated streets are decorated with art all in floral display. Artists begin painting and drawing on the street on Friday. By Saturday, it’s ready for the crowds to view.

Via Nicolaci is also the street where you can find the ‘Insta-worthy‘ Villadorata Palace. It’s home to the ‘most beautiful balconies in the world,’ and the achingly chic luxury boutique hotel, Seven Rooms Villadorata.

Where to stay in Noto — boutique hotels in Noto

Villadorata Palace is an 18th century palace with many striking features. It’s most famous for its wrought-iron balconies, with theatrical figures hanging beneath.

Seven Rooms Villadorata — what to see in Noto

Seven Rooms Villadorata is the next best thing to staying at the Villadorata Palace. It’s a boutique hotel in the private apartments of the south wing of the Nicolaci Palace. Guests are treated to a taste of Sicilian aristocracy, first-class service and sumptuous furnishings.

“Artists begin painting and drawing on the street on Friday, and by Saturday, it’s ready for the crowds.”
FOLLOWING THE RIVERA
This place is unlike any hotel in Noto, perfectly combining comfort and elegant design. We booked a few nights in a 2-bedroom suite, and instantly felt at home. The suite has generous sized bedrooms, a large bathroom, and living area.

They serve breakfast in a grand dining room — and you won’t want to arrive in your sleepwear here! Guests dine together at one long grand table, with staff serving you coffee and/or tea. There’s an excellent buffet-style breakfast serving classic continental choices.

What’s more, Seven Rooms Villadorata has an enclosed, and ample, parking area within the grounds. The hotel’s a good choice if you’re looking for a boutique hotel in a quiet, and central part of Noto. In short, it’s somewhere I’d happily stay again.

Are you planning to visit Noto, or Sicily soon? Drop me a comment or question below, and I’ll do my best to answer it! 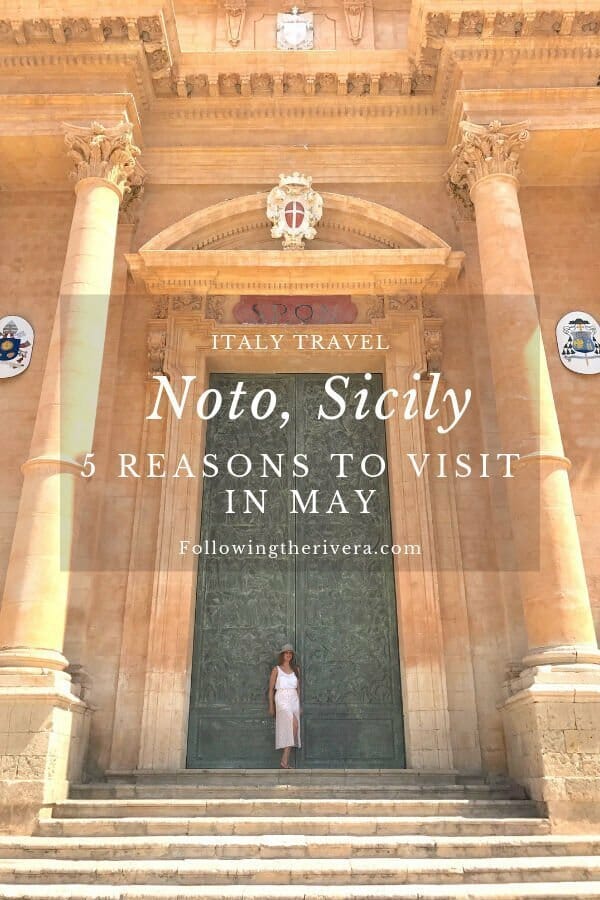 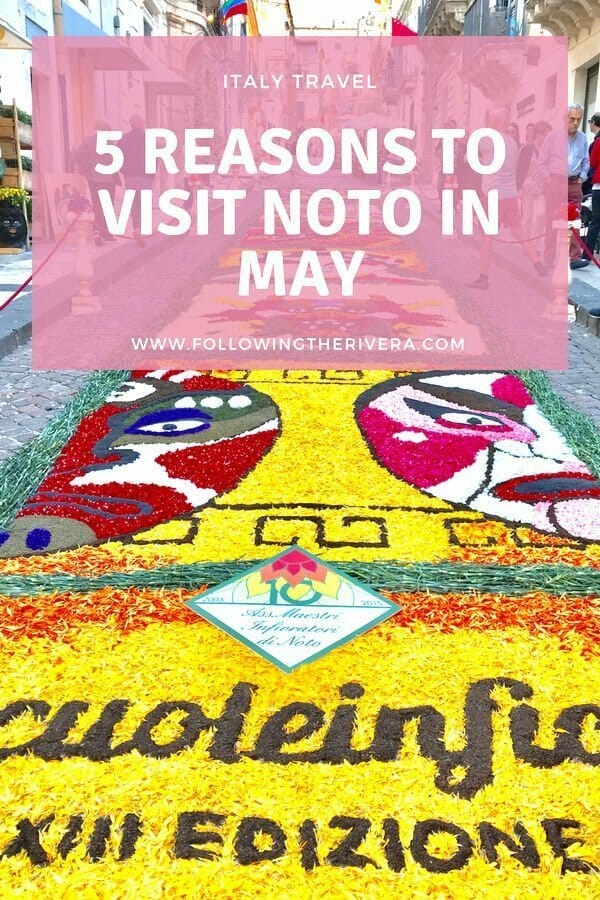 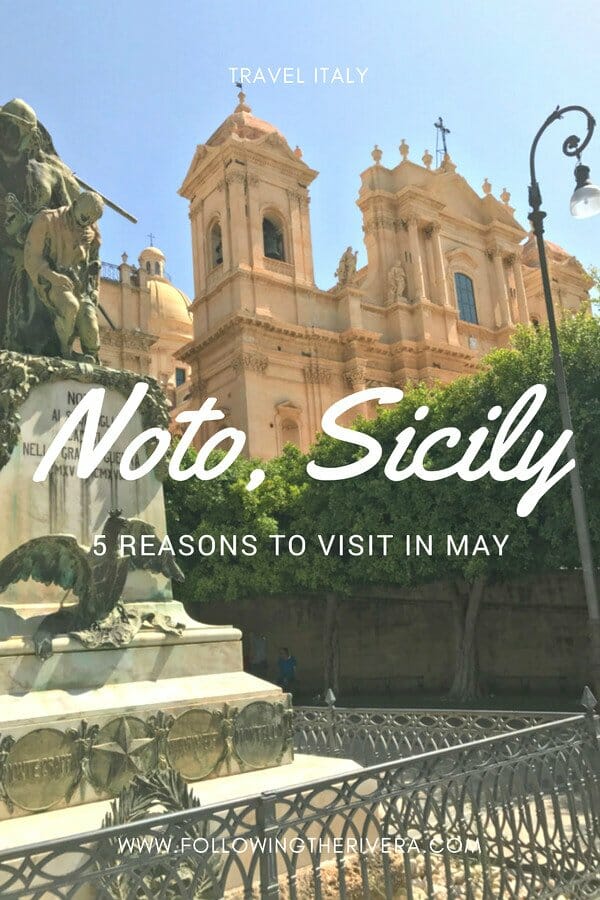