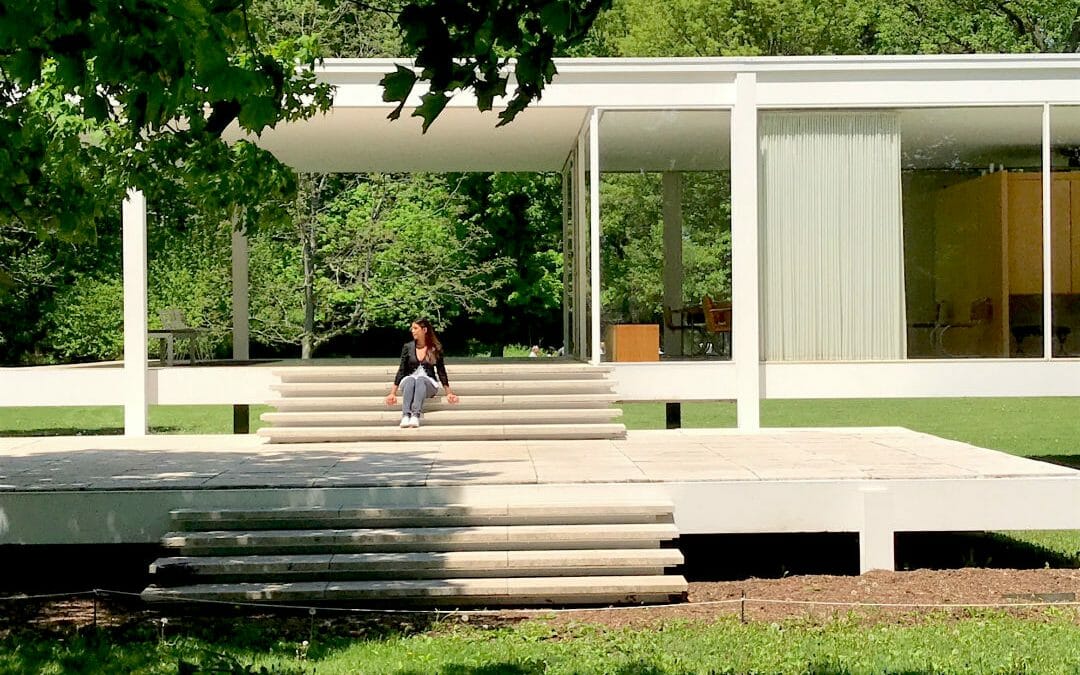 From the many times I’ve visited Chicago, I’ve rarely left the downtown area and surrounding neighborhoods, like Wicker Park. This is namely because I’m usually there visiting family, and don’t tend to venture too far out.

However, on this occasion, we were lucky to get out of the city and do a day trip to Farnsworth House. It’s a masterpiece of modern architecture from German-American architect Mies van der Rohe.

How do I get to Farnsworth House?

To reach Farnsworth House, you’ll definitely need a car. The house is quite a distance from downtown Chicago, in a rural area of Illinois called Plano. It took around 1.5 hours to get there from the city, and with minimal traffic.

The history behind Farnsworth House

The house takes its name from its former owner, Dr Edith Farnsworth — a prominent doctor during her time. She commissioned van der Rohe to design a weekend home where she could relax and enjoy the surrounding nature.

Responding to the brief, van der Rohe created the glass and steel structure. Designed and constructed between 1949 and 1951, Farnsworth House is one of the finest examples of modern architecture. Measuring 1,500 sq ft, the house is built on a wooden site facing the Fox River.

It’s undergone several refurbishments since 1951. British property magnate Peter Palumbo bought the property in 1972, and added air conditioning and extensive landscaping to the grounds. The house underwent more repairs after a severe flood damaged the property in 1996.

After Palumbo sold the property in 2003, the National Trust for Historical Preservation and Landmarks Illinois purchased the house. It’s now a National Historic Landmark of the US. Be smart and skip the lines to see the best attractions in Chicago.

The white glass and steel house is simple yet striking. Two rectangular spaces arranged together; the larger comprises the living area, and the smaller, the low terrace at the entrance. One of its most remarkable design features is that it doesn’t touch the ground. This was to protect the house from floodwaters from the river. In effect, Farnsworth House appears to be afloat.

Its surrounding environment is equally beautiful, with the vast green lands and the view of the Fox River. On a perfect spring day, in the sunshine, the house beams even more brightly. Unfortunately, the peaceful ambience that once was there, is now overshadowed by the noise of traffic from the highway bridge.

“Van der Rohe designed the house so that you can enjoy the surrounding nature inside from any point.”

Made from steel and glass, the impressive design extends once you enter the house. After walking up 2 short flights of steps, you open the doors to walk into Farnsworth House interior.

The first thing that hits you are the incredible views. Van der rohe designed the house so that you can enjoy the surrounding nature inside from any point. There’s also a different sensation when inside looking out, as opposed to the other way around.

Essentially, Farnsworth house is one large room — an open space with no dictated zones. A simple décor of brown and cream work its way throughout the interior.

Some of the current furniture comes from Mies’ grandson, Dirk Lohan, who himself is an architect. I was particularly drawn to the stylish ‘Barcelona’ chairs that you can see at the dining table and desk.

Behind the main wooden panel when you enter Farnsworth House is a hidden guest bathroom. This and the main bathroom are also enclosed in the core, to give the impression of a larger living space. Walk around the house, and you’ll find a fireplace and another seating area, all in the same matching color scheme.

My favorite part of the Farnsworth House visit is the bedroom. It’s towards the end of back of the house, with views overlooking the sprawling nature outside. The bed also matches the simple yet understated feel, and I’d happily wake up here with nature all around me. In essence, it’s a modern house built before its time.

During the colder months, heat comes through a radiant coil system in the floor, and hot water from a central boiler. There are also blinds on the full-length windows to give the house coverage from the outside.

What to know before visiting Farnsworth House 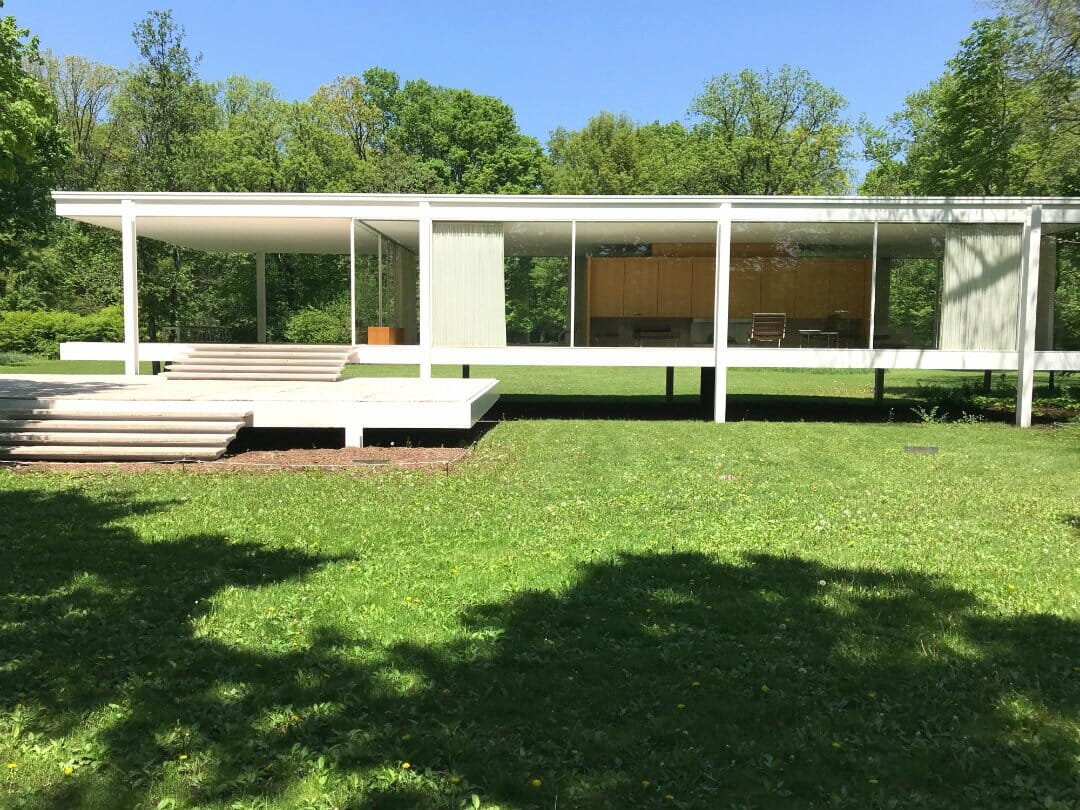 “Designed and constructed between 1949 and 1951, Farnsworth House is one of the finest examples of modern architecture.”

Related post – Where to eat in West Randolph Street, Chicago

Where to stay in Chicago

If you’re looking for excellent accommodation in the city, why not consider the superb Thompson Chicago? Stylish and modern, this luxury boutique hotel has 247 rooms, with floor to ceiling windows, and in a prime location. They also offer unforgettable views over Chicago’s Gold Coast neighborhood. 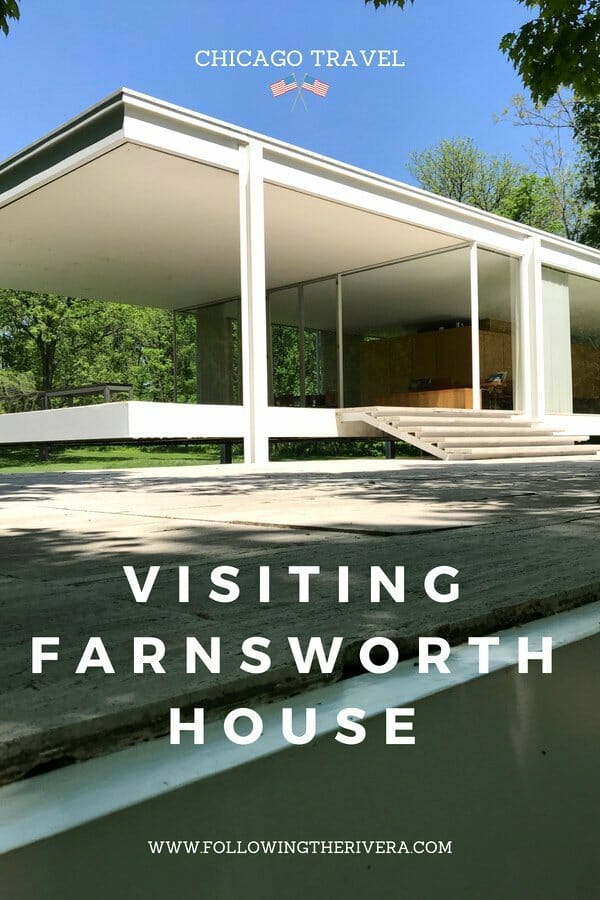 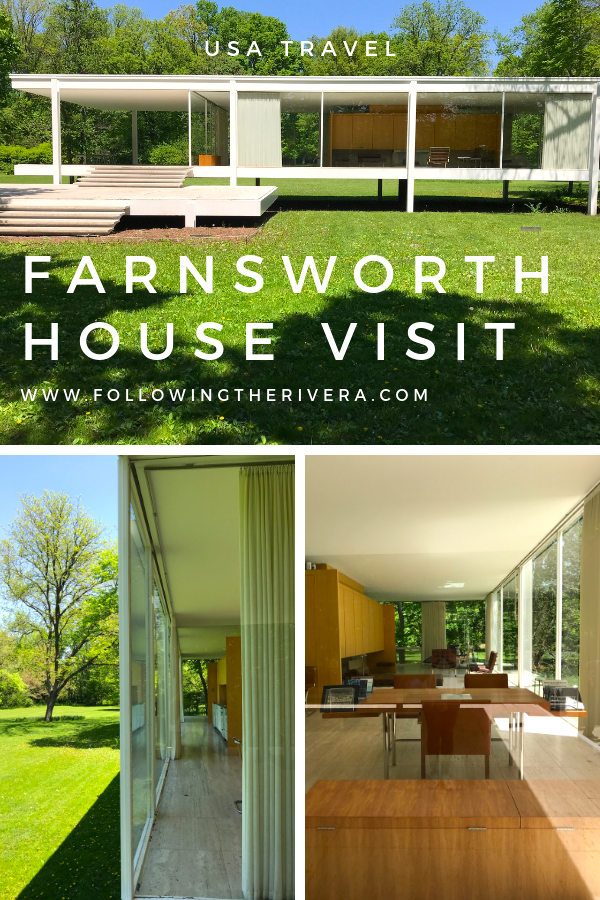