The tastiest NYC food tour with a secret twist

What do you get when you put together a vibrant city, some delicious dishes and a fun guide? Only a spot on one of the best NYC food tours in New York. Secret Food Tours NYC is an epic 3-hour event that’s perfect for curious epicureans and travelers alike.

First thing’s first: don’t be late. All attendees receive a reminder email a few days prior to the start of the tour. It states very clearly to be to be on time, and they don’t wait for any latecomers. Believe me, I should know! On the morning of the tour, the NYC metro happened to be severely delayed, as was I, for the tour. Six minutes late, I eventually found the meeting spot, only to find no-one there.

With no network on my phone, I had to resort to connecting to the free McDonalds WiFi! Thankfully, I eventually got through to someone and they instructed me where to go. Given my unfortunate experience, keep the contact details somewhere easily accessible.

When you book a Secret Food Tour NYC, you get more than a gastronomic experience. You also see a neighborhood of New York, in this case, Greenwich Village, and through the eyes of a local.

Greenwich Village has a rich, and diverse, restaurant scene, not to mention, a colorful history, all within a village setting. The area includes Washington Park and the legendary Café Wha?, which launched the careers of Bob Dylan and Jimi Hendrix.

The bubbliest tour guide on the best NYC food tour

The success behind any good tour is its guide, and ours was particularly wonderful. Native New Yorker Bridget is vivacious, knowledgeable and bubbly, and exactly the kind of person you want as a guide.

She was never without a smile on her face, and full of interesting tales and titillating anecdotes about the area. Holidays are better when you can skip the lines in New York to see some of the city’s best attractions.

When I think about New York dishes, the holy food trinity of hot dogs, pizza and bagels springs to mind. So, imagine my delight to find that the first stop on the tour was a popular, and local, bagel place.

This bagel shop is one of those places that made you wish you lived in New York. Every type on bagel is on display, along with the range of fillings available. The choice of bagels is as impressive as the fillings. Plain, whole wheat and onion, and pumpernickel and sourdough, it can be tough choosing the right one.

From sweet to savory, the variety of fillings are endless. Classic combinations include peanut butter and jelly and bacon and cheddar cream cheese. The braver foodies among you may be keen to try scallion tofu, strawberry tofu or Dutch apple.

My adventurous side doesn’t activate till after midday, so I stuck to one of the classic bagel and filling combos. Simple yet delicious, the ‘everything’ bagel with cream cheese did its name proud. Doughy yet buttery soft, it’s really everything you’d want in a good quality bagel.

The only other time I’ve been in a bar/pub around 11am is when I’m back in Veneto, Italy. It’s normal to see enjoy a spritz pre-lunch, and there’s zero judgement! So, I felt quite comfortable walking into the ale house at 11.15am.

A colonial style brick building, it appears like any other American sports bar on the surface. However, behind its wood paneling lies a colorful history. In its past life, the building was a 19th century stable and carriage and a jazz club called Café Bohemia. Legendary musician Miles David played here a few times, before the stage became a kitchen.

Speaking of the kitchen, the ale house dishes out classic bar favorites. We were there to taste one of its star attractions, the Reuben Sandwich. Pastrami, kraut and melted Swiss cheese between 2 slices of rye bread, with a healthy dollop of thousand island dressing. Eat the second it arrives, as the gooey cheese, tart kraut and salty pastrami combo tastes better when hot. For carnivores, it’s a meat dream in a sandwich.

“An incredibly melt-in-the-mouth doughnut with an olive oil and black pepper glaze, I could’ve easily eaten another!”

“New Yorkers don’t hang around when they get their slice, and neither should you.”

On Bleecker Street is a bakery dedicated to everything cupcakes. The interior has a school theme running throughout and there’s good reason behind this. Its name takes after the founder’s 3rd grade teacher, who used to bake cupcakes for the children. In homage of the homemade treats she used to make for them, its owner’s continuing her legacy with his shop.

Pull up a seat at one of the desks, or swing at the counter. Once again, I stuck with the classic red velvet cupcake, which had the softest sponge I’ve ever tasted. Apparently, the secret is adding a little vinegar to the cake mixture to keep it light and fluffy.

I had the classic vanilla frosting, but you can mix and match different cupcakes and frosting if you want. How does French buttercream or classic chocolate sound? They also cater for vegans too, so be sure to ask what’s available when you visit.

On arriving at the next stop on the tour, I wasn’t sure I’d be able to eat another sweet dish. I was wrong. The selection at this Doughnut place is so impressive and unique, I couldn’t resist. It’s the creation of a mad scientist of doughnuts, and every bite is memorable.

There’s been a revival of the humble doughnut in recent times, with inventive creations like the Cronut delighting the palate. It’s great news for me, as I love doughnuts, but admittedly, I usually stick to the classic flavors.

While other people on the tour chose more elaborate concoctions like the Bacon Maple Bar, I opted for The Bronx. An incredibly melt-in-the-mouth doughnut with an olive oil and black pepper glaze, I could’ve easily eaten another!

Other mouthwatering choices include The Everything Doughnut and the Black Gold, Texas Tea. The former has a sweet cream cheese glaze with poppy seeds, garlic and sea salt. The latter is covered in house made dark chocolate with a healthy sprinkling of cookie crumble.

Do yourself a favor if you’re ever in the West Village in NYC and visit this place, you won’t be disappointed.

No NYC food tour would be complete, without grabbing a slice of the famous New York style pizza. An authentic local spot in the west village, this pizza place is a no-frills, grab and go pizza joint. What it lacks in a fancy interior and exterior, it more than makes up for with the food.

Two friendly servers dish up piping hot slices of freshly baked pizza, all with a traditional thin crust. New Yorkers don’t hang around when they get their slice, and neither should you. Devour immediately and savor. We tucked into a slice of the classic Margherita cheese and tomato, which was gone within a few minutes.

A slice of pizza here — which is large — costs $2.75.* If you want to know whether you’re paying the right price, check the cost of a subway fare.

Bridget told us, that ‘if the slice costs more than a metro ride, you’re being ripped off!’ A useful tip for anyone visiting New York City for the first time.

“Molly is the name of the founder’s 3rd grade teacher, who used to bake cupcakes for the children.”

They also sell other Italian favorites, such as chicken parmigiana and fettuccini Alfredo, served with bread, and/or pasta. Prices are very reasonable, especially for New York, and I can understand why this place is a firm local favorite.

The unique selling point of attending a Secret Foods Tour NYC is none other than discovering its secret place. That said, I won’t be giving anything away here; you’ll have to join a tour and find out for yourself!

We were lucky to experience the hospitality of 2 excellent luxury boutique hotels in the city.

The Greenwich Hotel and The Crosby Street Hotel are in central locations, and both achingly beautiful options. Expect generous-sized rooms, a personal service and unique design you can’t find elsewhere.

Over to you? What do you think of the Secret Food Tours NYC? Have you ever done any NYC food tours? Let me know in the comments below!

*Prices correct at the time of writing.

Disclosure: Though I was invited by Secret Food Tours NYC, all views expressed are my own. This post may contain affiliate links, which means I may receive a commission if you click a link and purchase something that I’ve recommended. Thank you for your support. 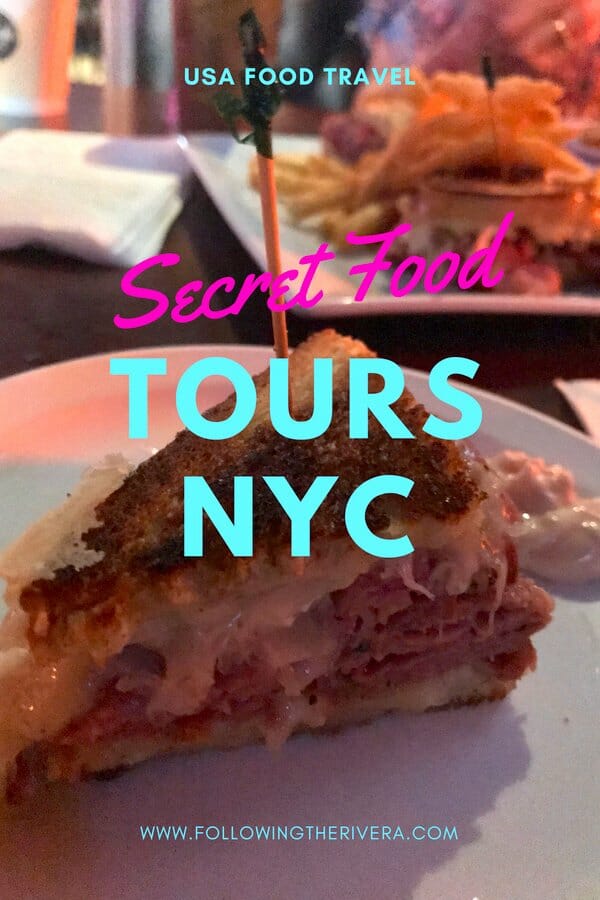