It’s not easy writing a post about the best Sicilian food. A cuisine that’s recognizably Mediterranean, with a pinch of Arab influence, it’s a unique fusion of flavors.

When it comes to Italian cuisine as a whole, it’s safe to say it’s high up the food hierarchy. From Tagliatelle al ragu to risotto to pizza, there’s no-one I know who doesn’t crave a big bowl of Italian.

There are several staple ingredients that make up a good Sicilian dish. These include plump orangey-red tomatoes, fragrant lemons, sweet white onions, robust olive oil and capers that pack a salty punch.

Sicilians take food, and cooking, very seriously, and it’s something they do extremely well.

The food culture in Sicily

Each year, I’m lucky to return to Sicily, and with each visit, I get to eat some of the best Sicilian food. Specialties vary depending on which part of the island you’re staying on.

Take a car around the capital city of Palermo, and you’re more likely to see some Arab influence in the food. Whereas, a cruise along the east coast and the Aeolian Islands will give you a classic taste of the Mediterranean.

This vegetable dish is a Sicilian classic, and probably also my absolute favorite thing to eat. It’s ideal as a light lunch, or also as an accompaniment to a fish course.

It slightly reminds me of the French classic, Ratatouile, but the sweet and sour combination in Caponata is far superior!

The dish is said to come from the Spanish, where the Catalan word ‘caponada’ refers to a kind of relish. The star ingredient here is aubergines, which thanks to the sunny Sicilian climes, is unlike any I’ve tasted before. Caponata is a dish best eaten cold, along with a serving of warm crusty bread.

Learn more about the Sicilian food culture, from the locals who know it best. Why not enhance your Sicily food travel experience by taking a cooking class, or a guided tour? 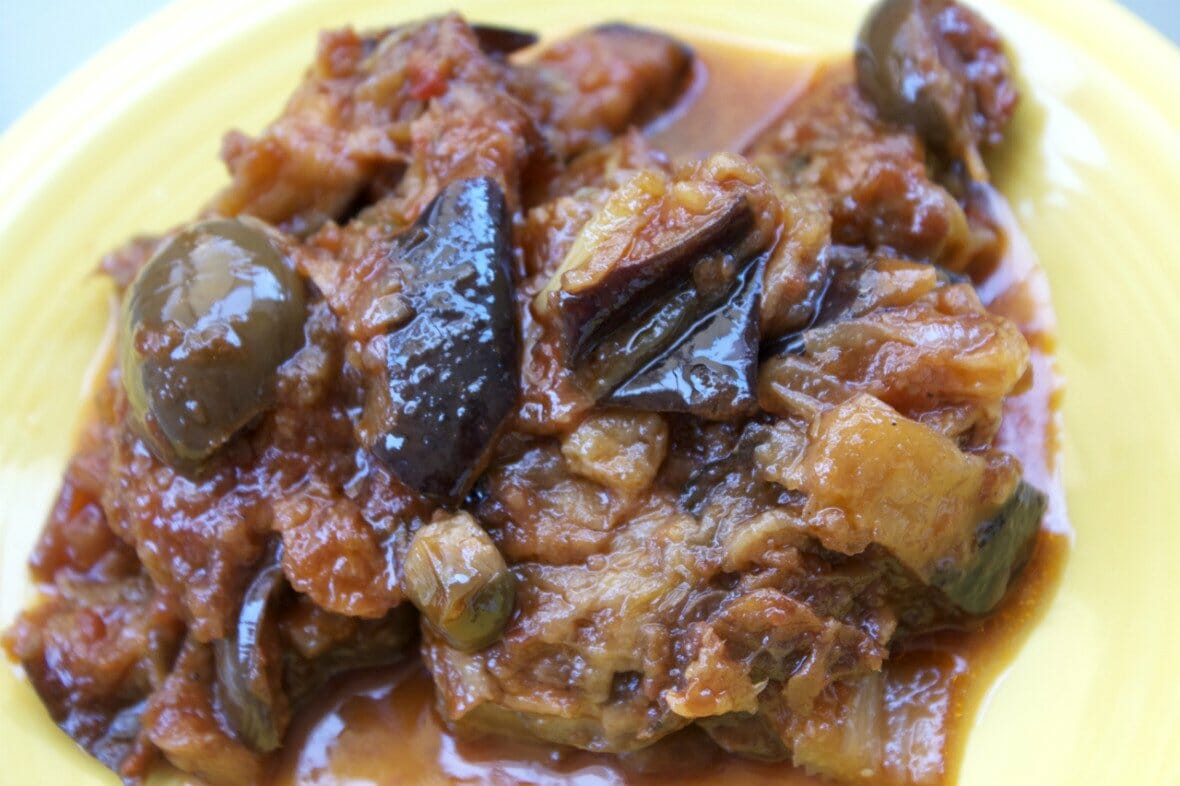 The best place I’ve ever eaten arancini in Sicily is in Catania.

They sell these deep-fried stuffed rice balls everywhere in Sicily. You can usually find them in rosticceria — places that serve Sicilian street snacks — but not everyone is good. From experience, Café E’toile in Catania serves up some of the best.

‘Arancino’ means ‘little orange’; a reference to the orange color the arancini has once it’s cooked. With its origins dating back to the time of Arab rule, this street food’s been around a long time. Fillings vary, but if you want to try a popular classic, go for the arancini al ragu.

This deep-fried coated rice ball stuffed with a rich tomato-based meat sauce is incredibly good, and also very filling. For vegetarians or vegans, I recommend tasting the arancini con funghi, or arancini con pistacchi. Meat is substituted with mushrooms in the former, and pistachios in the latter.

This dish has me drooling like Homer Simpson at the very thought — it’s that good! It’s popular all over Sicily, but particularly in Catania. Essentially, involtini are small rolls, and they make this particular version from swordfish (pesce spada).

Pieces of fish are coated in a mixture of breadcrumbs, capers and then baked. Ingredients can also vary according to the recipe.

I’ve also tried involtini di pesce spada with pine nuts, and another with tomato sauce. You can’t find it everywhere, but when done well, you’ll be coming back for seconds. 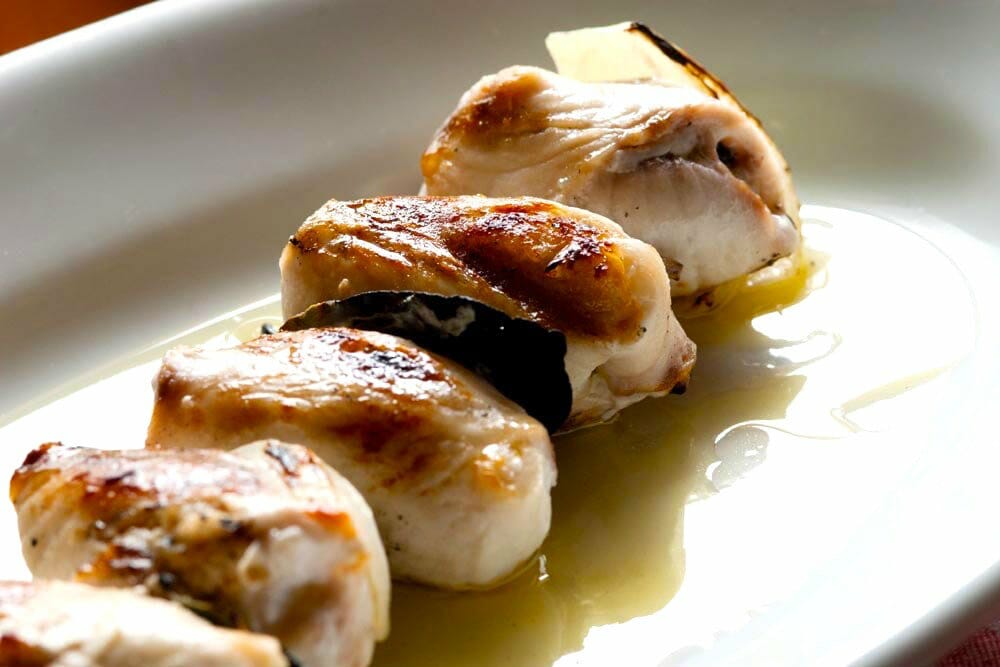 Another dish comprising of Sicilian aubergines, there’s always a good time to eat Melanzane Parmigiana. The name itself has nothing to do with the city of Parma in the north of Italy.

Instead, there are different meanings of ‘parmigiana’ and in this context, it’s quite metaphoric. In Sicily, it refers to a type of external shutter, similar to blinds on a window.

It actually makes sense, with the aubergine being the ‘blinds’ for the layers of tomato sauce, basil and cheese. The result is one versatile dish you can easily serve as a starter, or also as a main course.

There are regional varieties of the dish, with Naples and Emilia Romagna having their own version. Some Sicilian versions also have hard-boiled eggs, and it’s an extra ingredient that makes a whole lot of difference.

Pasta alla norma for a Sicilian is the equivalent of fish and chips to a British person. It’s so popular, which is understandable as it’s so simple to make and very tasty.

This typical Sicilian dish hails (again) from Catania, and consists of pasta served with tomatoes, aubergines, salted ricotta and basil.

The name is said to have origins in 2 places. The first is that it signifies the tradition and ‘norms’ of the region. The second, is that it’s named after the opera ‘Norma’ from Catania-born composer, Vincenzo Belini. A Sicilian writer and poet likened the dish to Belini’s masterpiece after trying it for the first time. 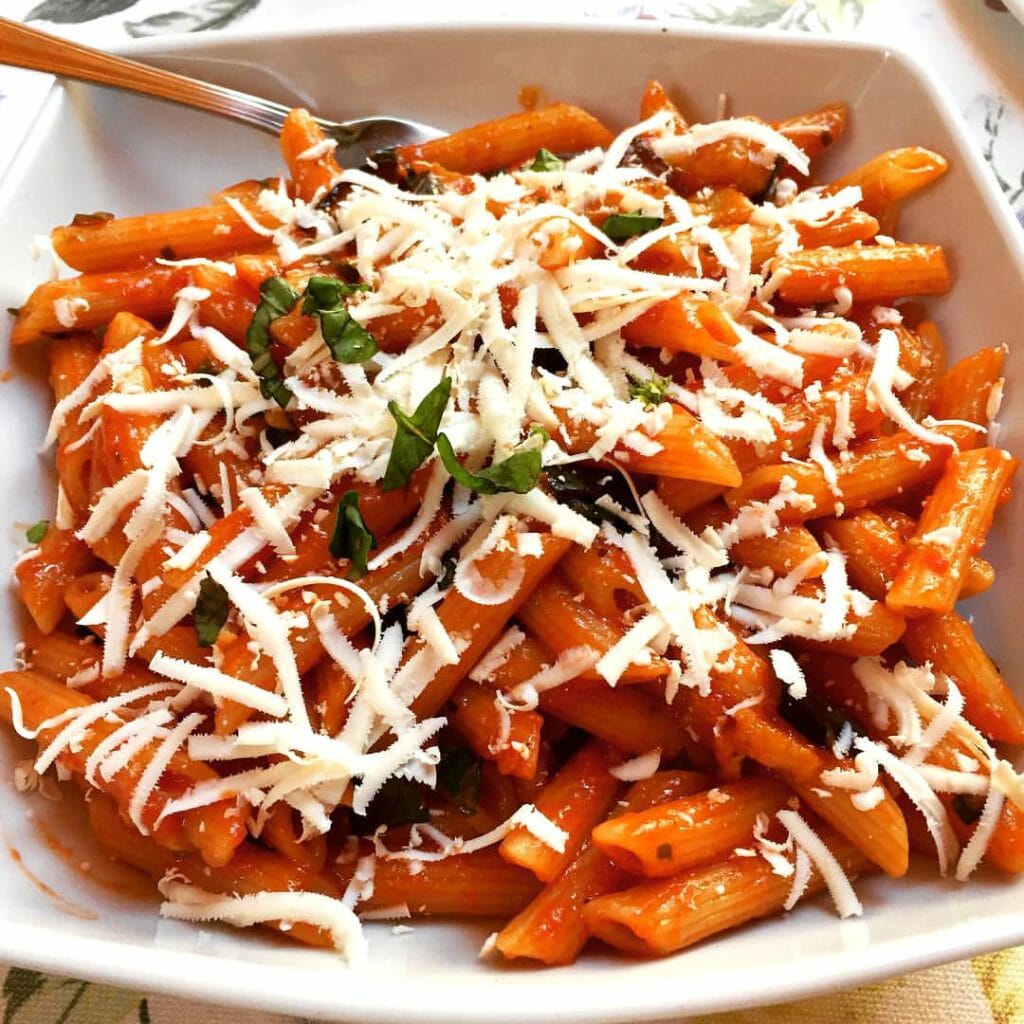 “There are several staple ingredients that make up a good Sicilian dish. These include…fragrant lemons…and capers that pack a salty punch.”

Pane e Panelle — What are the best Sicilian dishes?

Street food is king in Palermo, and if it’s fried, it’s likely to be very good. Pane e Panelle is a classic example of common street food, and I highly urge you to try it.

Take a street food tour; you’ll try the most classic eats, and at also the best local places. They’re deep fried fritters made from chickpea flour and sometimes stuffed into a bread roll. Panelle dates back to the time of Arab rule from the 9th to 12th centuries.

Some versions also come with crocche, which are potato croquettes. The color may be beige, but the taste is anything but bland. Panelle is also good news for anyone who’s gluten intolerant (forget the bread roll), plus it’s vegan too.

Looking for a luxury boutique hotel in Palermo? The Grand Hotel Villa Igiea Palermo is a 5-star hotel with elegant rooms and views overlooking the Bay of Palermo. No 2 rooms are the same, and it also has a solarium and an outdoor pool.

Some of the tastiest Italian dishes began life in humble beginnings.

Sarde a beccafico is one such example, originating as a dish of the local fishermen. In short, it’s Sicilian sardines stuffed with breadcrumbs, raisins, pine nuts and parsley.

It in fact takes its name after resembling the bird, beccafico (when stuffed), that the Italian aristocracy used to hunt. It’s popular in Palermo, made from simple local ingredients, and very Sicilian.

Freshly caught sardines are cleaned and stuffed with a balance of sweet and savory flavors. It’s then rolled, and baked until golden. Fillings can vary according to the recipe, with some versions including capers.

Related post – Where to find Sicilian baroque architecture in Noto

Falsomagro follows the pattern in that it’s another stuffed Sicilian dish. This one’s a traditional meat roll typically made from beef or veal, and stuffed with bread, cheese and ham.

Slices of bacon, onions, garlic and fresh herbs and hard-boiled eggs complete the dish. They then tie string around the joint to keep the flavors together, and put it in the oven.

The name literally translates to ‘false lean.’ This refers to the small amount of meat in the dish compared to its generous size. Another meaning is said to describe the lean cut of meat that’s used, which contrasts to the higher fat filling.

You’ll find Falsomagro more common in rural areas of Sicily, where they usually serve it at home on Sundays. If you’ve the chance to try it on your travels in Sicily, don’t hesitate to give it a go. 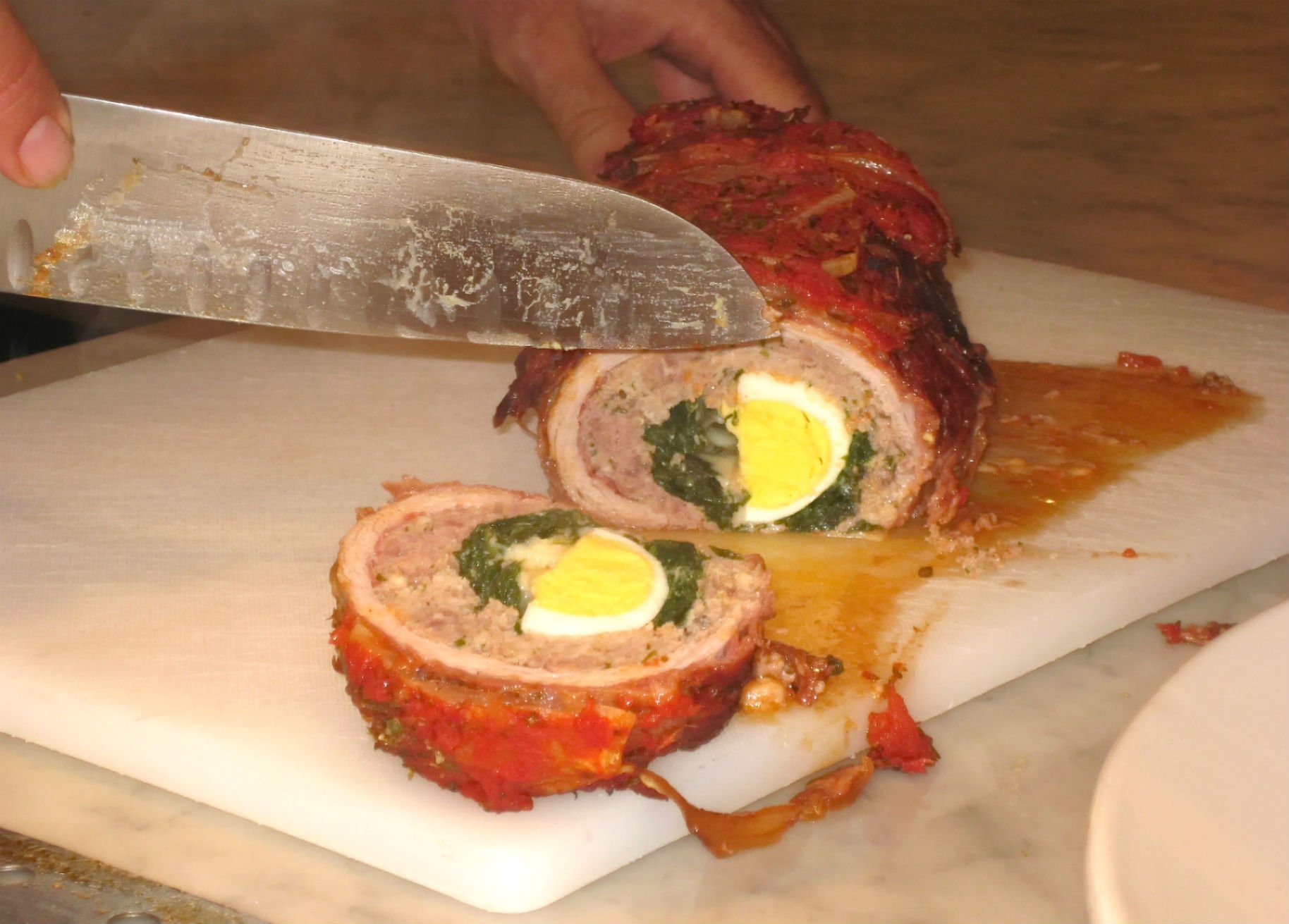 Like Sarde alla beccafico, this popular bread-based snack also has roots in being the food of the poor. It’s known as the ‘bread of misery’, because it was only the rich that could afford to flavor their bread. The taste, however, is far from miserable.

A large loaf of bread is cut in 2, with the base layer seasoned with olive oil, salt, pepper and oregano. They then add a generous serving of cheese, tomatoes, and anchovy fillets, and a top layer of bread. Once ready, they place it in the oven and wait for the melty transformation.

Despite its modest history, pani cunzatu is rich in flavor and also ideal as a light lunch or starter. Toppings can vary depending on which part of Sicily you’re in. In the Aeolian Islands, they also like to add capers, basil, green olives and tomatoes.

A good choice for a luxury boutique hotel on the island of Salina is Hotel Signum. Enjoy one of their classic, superior or deluxe rooms, or upgrade to a luxury suite. You can also treat yourself here to a massage, and also take advantage of the wonderful spa and treatments.

A dish that’s rustic and robust in taste, pasta con le sarde is a celebration of everything good about Sicily.

Pasta is served with sardines, anchovies, wild fennel, raising pine nuts, saffron, olive oil and seasoning. It’s not easy to get wild fennel outside Sicily, so other variations use fennel leaves as a worthy substitute.

Notorious for being a ‘poor’ dish, the extremely flavorsome ingredients in pasta con le sarde creates a big, and lasting, impression.

Sadly, it was once known as ‘trash pasta’ in the past. This is because fisherman would use sardines as bait, or throw it back to the sea. Also, they didn’t regard sardines as high value, which led to poorer families creating pasta con le sarde.

Which of these Sicilian dishes have you tried? Are there any that appeal to your palate? Let me know in the comments below! 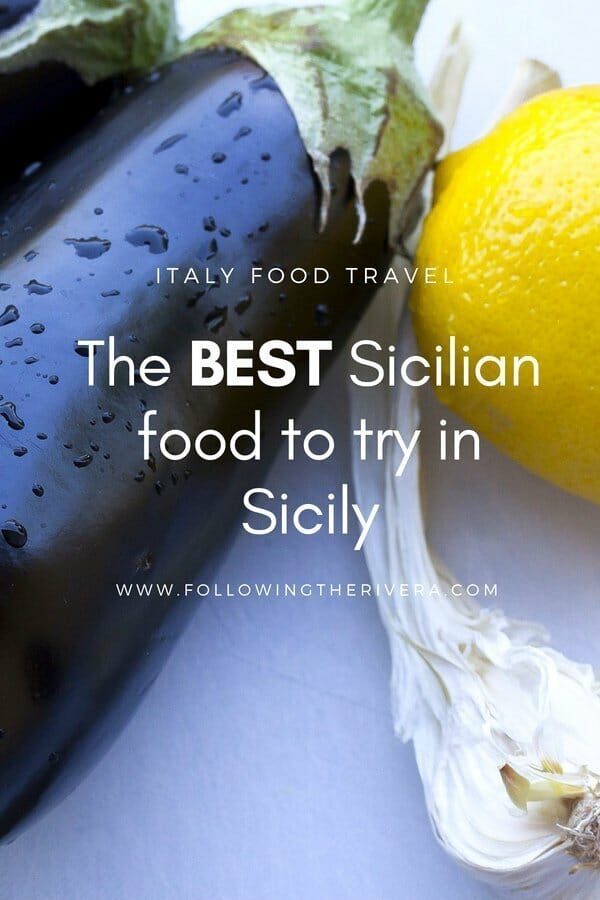 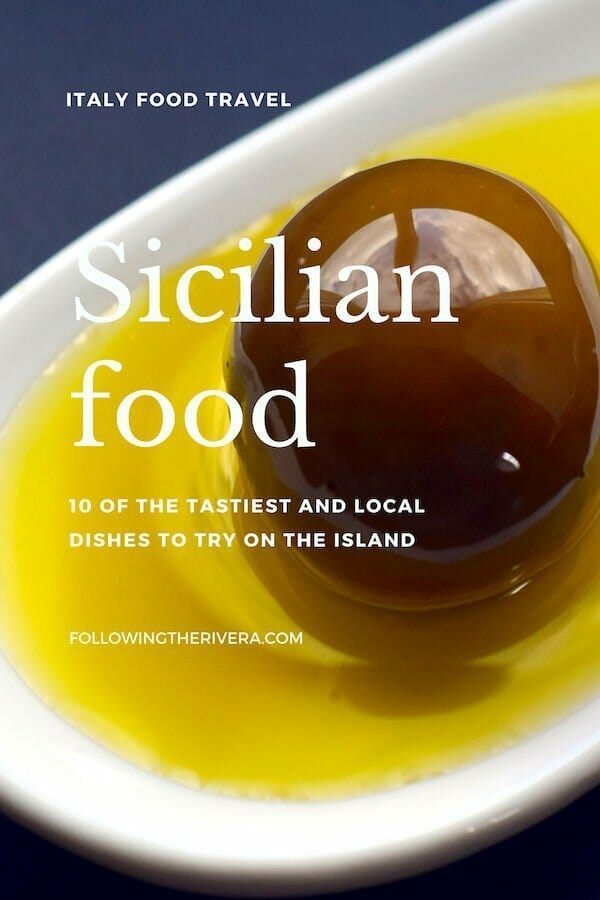