5 reasons to travel to York in September

5 reasons to travel to York in September

York is one of the prettiest towns you can visit in the north of England. There are plenty of things to do in York and it also makes for a fantastic day trip from London. There are many great reasons to travel to York and experience a quintessential English town bursting with history.

In 2018, The Sunday Times newspaper named York the best place to live in the UK. Its blend of the old and the new makes York a desirable hub to settle in, and also to visit. If you need any more convincing to travel to York, these 5 reasons may just do the trick.

York is situated in the romantic green county of Yorkshire in the north of England. From London, it’s under 2 hours on a fast train, making it a great option for a day trip. It’s also perfectly situated if you fancy exploring bonny Scotland too.

York makes a good base for seeing landmark attractions, such as the North York Moors and the Yorkshire Dales. If you’re a literary fan, you won’t want to miss seeing Bronte country.

It’s an area of the south Pennine Hills, south of west Yorkshire where the Bronte sisters lived and worked.

More to see — travel to York

Many visitors tend to visit the Cotswolds in south-central England for its rolling green hills and stretching views. However, Yorkshire has its own ‘wolds’ called the Yorkshire wolds.

An area of rolling hills and valleys, you can find the wolds just south of the North York Moors. Here, you’ll see many quaint market towns, English country houses and a breathtaking coastline.

Hikers and walking enthusiasts visit the wolds each year to complete the Yorkshire Wolds Way National Trail. It’s 79 miles in length, with plenty of incredible natural sights, such as the Bempton Cliffs Nature Reserve.

Given its magnitude, you should consider booking a hotel to get the most from your time here. York is better with a local! Seeing the best of the city, and county, is better with your very own tour guide. Ideal for solo travelers, traveling with a family, or as a couple, these tours are also budget friendly.

2. The history — travel to York

The Romans founded York in 71 AD, first naming it Eboracum. At one point, York was the capital of the Roman province of Britannia Inferior, and later, Northumberland and Jorvik. The latter is the Old Norse name for York, which reflects the city’s ancient Viking heritage.

To learn more about York’s Viking past, visiting the JORVIK Viking Centre is essential. You can find out what life was like during the Viking period, told through dioramas and lifelike mannequins.

Signs from the city’s Roman ancestors are still apparent around the town today. The most notable reminder are the remains of the city walls. In fact, York’s city walls have more miles of intact walls than any other place in England.

The Romans built them as part of the fort’s defenses. Along the walls are 4 gatehouses, also known as ‘Bars’ in York. These were guarded entry control points that were used to defend the fort and restrict traffic in the middle ages.

The city has plenty of sights, both old and new to satisfy your curiosity. York Minster is usually the no.1 attraction people come to see, and for good reason. It’s the second largest Gothic cathedral in Northern Europe, and one of the most iconic churches in the country.

It’s also the seat of the Archbishop of York, which is the second highest office of the Church of England. York Minster is an incredible opportunity to learn more about medieval architecture and to also explore its Roman roots.

There’s an entrance fee to York Minster to help maintain its upkeep, but it’s free with the York Pass. If you want to attend mass, there’s no entry fee. 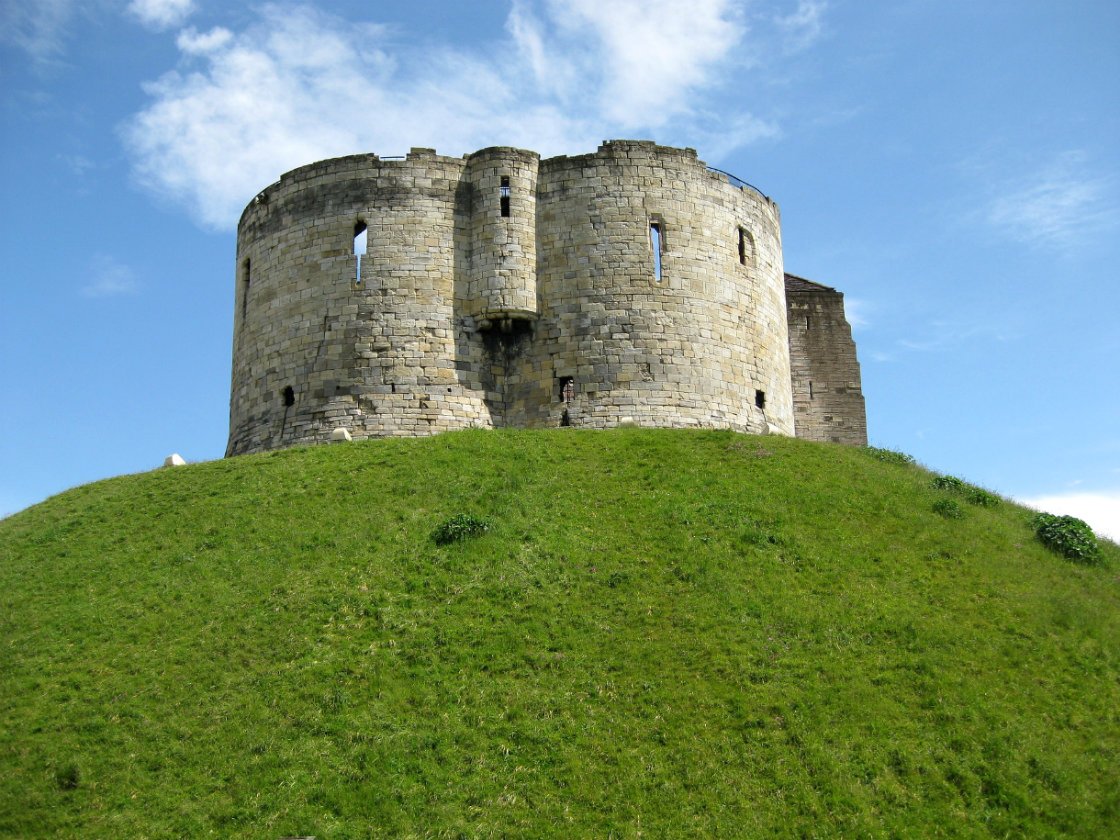 The word ‘castle’ is a little misleading here, as what’s really left are the remains. William the Conqueror built York Castle in 1068, along with a second castle, to defend the city. Now commonly referred to as Clifford’s Tower, it’s an ideal starting point to explore York.

Head to the top of the tower to catch some panoramic views of the entire city and the North York Moors. There’s a small admission fee, but it costs nothing if you purchase the York Pass.

“There are many great reasons to travel to York and experience a quintessential English town bursting with history.”

The National Rail Museum is the largest of its kind in the country, and also the world’s largest railway collection. Take a closer look at the most iconic British locomotives from over the centuries, and all under one roof.

Entry to the museum is free, and it’s open daily, including public holidays. It’s also only a few minutes’ walk from York train station, meaning there’s no reason not to visit.

Make time for a spot of luxury shopping at York Designer Outlet. Shopping enthusiasts can get up to 60% off top designer, high street and also homeware brands.

It’s around 30 minutes by bus from York train station, and is open till 8pm every night, excluding Sundays.

4. A full events calendar in York

There’s never a dull moment in York, with an event taking place each month. In September, the annual York Food and Drink festival takes place, never failing to draw in the crowds.

Beer lovers also get to unite in Bavarian style at the much-loved Oktoberfest in October. The event only started taking place in York in 2018. with the organizers working to recreate an authentic German festival.

The festive season — travel to York

Christmas is a particularly special time in York. The Christmas festival gets locals and visitors into the festive spirit, bringing medieval charm to the streets of York.

Browse the Christmas market stalls at St Nicholas Fair, and also sample the treats and mulled wine at the Yorkshire Barn. Round off your Christmas experience by attending the carol concert at York Minster.

It won’t come as a surprise to know that it’s the most popular event in the cathedral’s calendar. You do need to book tickets to the event, which takes place this year on 13 and 14 December.

Enjoy a mix of classic and contemporary Christmas classics, performed by the York Minster Choir. Audience participation and plenty of cheer is a must!

There’s an excellent culinary scene in York, and also a wide variety of cuisines to choose from. Whether you’re looking for traditional English food, or something more continental, York has a restaurant to suit your palate.

Rustique is a French restaurant that’s in a central location next to Clifford’s Tower. As the name suggests, it serves up rustic fare, such as Moules Marinieres and Coquille Saint Jacques. Prices are also very reasonable and it’s a local favorite for good reason.

Plenty to eat — travel to York

Café No.8 Bistro serves up high quality bistro items, and is a good choice for breakfast, lunch or dinner. Its situated on Gillygate — a road full of independent shops, which leads right to the heart of the city.

Popular lunch items include a brie and pesto flatbread for the veggies, and wild boar sausages for the meat eaters.

A modern British restaurant that includes a Yorkshire tasting menu is the order of the day at Melton’s Restaurant. The menu’s fine dining at its best, and it also has a rating of 5 in the Good Food Guide. Melton’s Restaurant is one of York’s top places, so I urge you to book ahead to avoid disappointment.

Where to stay in York

The Grand Hotel & Spa is a luxury hotel in a period building that’s a short walk from York Minster. Check into one of their stylish rooms, or a sumptuous suite.

While there, also put some time aside to relax in the spa or take a swim. It’s one hotel that’ll make you want to extend your stay in York.

For a 4-star modern hotel that’s moments from York train station, look no further than The Principal York. Their rooms and suites reflect the hotel’s ethos of mixing tradition with modernity, and the result is simply stunning.

Facilities include a gym and indoor pool, plus a restaurant and bar for guests to unwind after a day’s exploring.

What do you think about York? Is it somewhere you’d like to visit? Let me know in the comments below!

Disclosure: This post is in collaboration with Visit York. It may contain affiliate links, which means I may receive a commission if you click a link and purchase something that I’ve recommended. Thank you for your support. 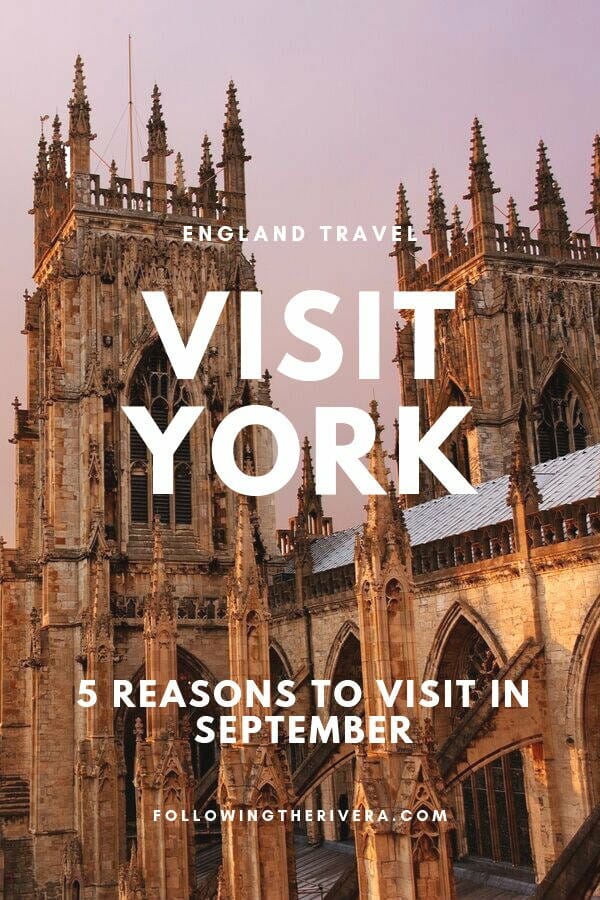 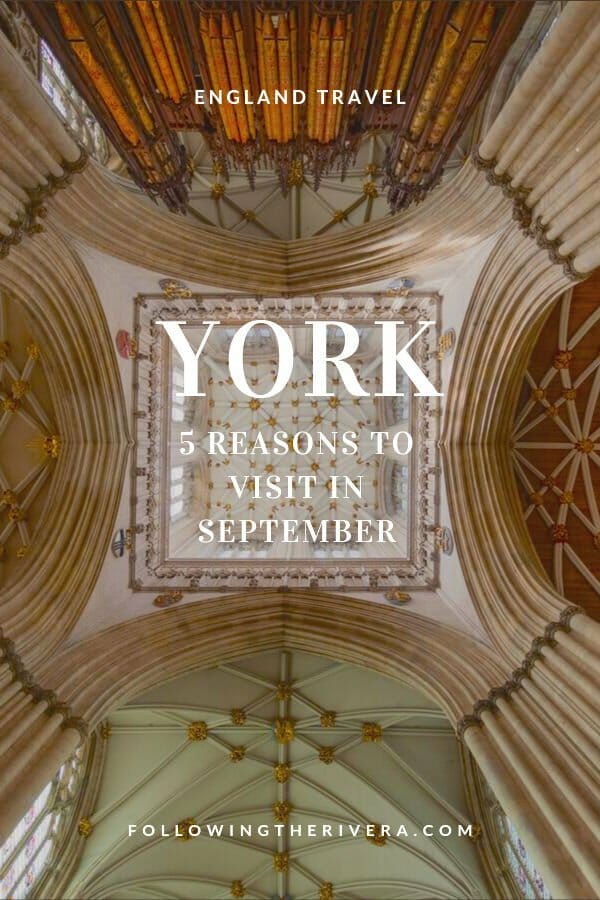