5 fun things to do in Warsaw in winter 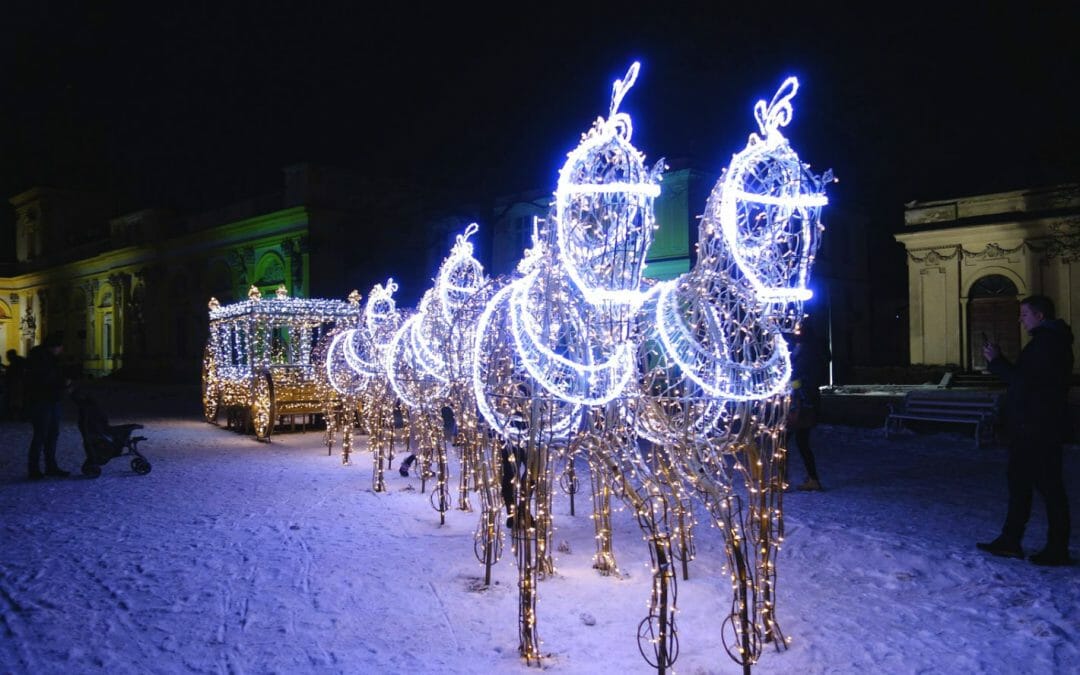 Indoor and outdoor things to do in Warsaw in winter

Table of contents hide
Indoor (and outdoor) things to do in Warsaw in winter
Warsaw Christmas market
Warsaw Royal Palace
Map of all the places listed on this post
Palace of Culture and Science observation deck
Visit one of Warsaw milk bars
Gather some shelter, and food, at Hala Koszyki
Great boutique hotels in Warsaw

The sun had already begun to set as our flight landed in Warsaw — it had just turned 3.10pm. I’d no expectations when we landed in the Polish capital in winter, but I’d expected the cold. With temperatures already in the minus, we planned to find fun things to do in Warsaw in winter, and mainly indoors!

It’s safe to say that I’m not a fan of the cold. We don’t really gel, plus I begin resembling the shape of a bell under all the layers of clothing. However, there’s something challenging in visiting — and enjoying — a cold climate, especially for someone who detests it.

Visiting Warsaw in winter puts you in the mood for the upcoming festive season. While you can’t completely avoid outdoor activities, there are many things to do in Warsaw where you can remain toasty indoors.

Indoor (and outdoor) things to do in Warsaw in winter

The Warsaw Christmas market starts around the last week of November. Dates can vary, but in recent years, this is the time of year they begin. You can find the main market in Castle Square in the Old Town, among the backdrop of the historic centre. At this time, you’ll also see the grand Christmas tree in the square, with its sparkling decorations beckoning its visitors.

It’s much smaller than its popular counterparts in Prague or Vienna, which in my eyes, isn’t necessarily a bad thing. With temperatures hitting -8 in the evening, we couldn’t spend too long browsing the stalls from fear of getting frostbite! That, plus we could actually see the merchandise on offer.

The stalls sell everything from traditional Polish snacks and mulled wine, to Christmas gifts and stocking fillers. Also, with a good exchange rate with the Polish currency (Zloty), we bought several items for ourselves and the family.

Along with the main Christmas market, there are also others worth checking out. For food and drink, head to the Old Town Market Place, where you can indulge in some authentic Polish kielbasa. Alternatively, visit the Catholic church courtyard market near the Castle Square entrance and invest in some quality winter woolies.

All in all, we enjoyed visiting the Warsaw Christmas market. Although it did get uncomfortably cold, the festive atmosphere surrounding the market is worth seeing. If, however, you prefer your markets on the crowded and bigger, side, then it’s probably not for you.

A very short walk from the Warsaw Christmas market is the Warsaw Royal Castle. Once home to the Polish monarchs, the castle has had many ‘visitors’, including the Prussians and also the Tsarists.

After being occupied by the Tsar during the Imperial Russian administration, the biggest devastation occurred during World War II. Nazi Germany invaded Poland in 1939, leaving the German Governor-General to turn the castle into his residence.

In 1944, the Warsaw Uprising took place. The Polish underground resistance tried liberating the city from Nazi rule but were defeated after a battle lasting 63 days. In reprisal, the Germans torched the city, destroying everything in their path, including the castle.

The castle was rebuilt and reconstructed from 1971 to 1984, with the surviving fragments registered as historical monuments. Today, the castle’s a UNESCO heritage world site, and also a must see in Warsaw.

If you’re visiting in November, you’ll be happy to read that entrance to the castle is free. We were pleasantly surprised when we found out, and learned that other attractions are also free in November.

Along with the chance to keep warm, the castle provides an in-depth look into the city’s historic past. The rooms of the castle, though reconstructed, show off the baroque style and opulence of the aristocratic period.

Map of all the places listed on this post

Try as you might, but it’s very hard to miss this iconic building when in Warsaw. Standing at 778ft tall (237m), the Palace of Culture and Science is also the tallest building in Poland.

The building was a gift from Stalin and built to rival the skyscrapers found in the USA. At first glance, it’s quite confusing as to its purpose, given that it appears to have several functions. Having now been, I can tell you that it’s home to a cinema, as well as a theatre and science institutions.

Inside, signs of the former Soviet regime are evident, especially when you look up. There’s not much to do inside, unless you speak or understand Polish, but you can visit the observation deck. Based on the 30th floor, the observation deck’s also the place to see stretching views of Warsaw.

Naturally, I’d recommend visiting on a clear day — sunny if you’re lucky like us. During the warmer months, there are several deck chairs around where you can lap up the views. Winter’s another story of course, and given the altitude, the wind’s less forgiving at that height. You do need to purchase tickets beforehand, but it’s reasonable at 20 Zloty (£4.00 / €4.60 / $4.60).

“With temperatures already in the minus, we planned to find fun things to do in Warsaw in winter, and mainly indoors!”

Visit one of Warsaw milk bars

We discovered a unique dining experience in Warsaw that kills 3 birds with one stone. Traditional, hearty and cheap, Warsaw’s milk bars are an epicurean experience unlike any other. The first one opened in 1896 selling basic dairy-based products, hence where it took its name.

During the communist era, the government subsidized milk bars, using them as workplace canteens. After the end of communism, many milk bars went out of business, and with it, a one-of-its-kind type of institution.

In recent years, a retro revival of Warsaw’s milk bars has resulted in people flocking once again to its doors. Leave any fine dining expectations at the door, as this is comfort, wholesome food at its best.

One of the most notable milk bars in Warsaw is Prasowy. Food, alongside a hearty portion of nostalgia is served up at this self-service eatery. Expect creamy mash potatoes, a filling meat dish, and warming soups. Better yet, you can eat a wholesome 2-course meal for under £5 ($7; €7).

There’s an English menu by the door, and usually a server at the counter that speak English. The meal option also comes with a free drink — a glass of blackcurrant squash. Needless to say, it’s one local foodie experience you cannot miss when in Warsaw.

Related post – What to pack in Poland in winter

Gather some shelter, and food, at Hala Koszyki

While Hala Koszyki is listed as a shopping centre, for me, its main attraction is the food court. Ideal for getting away from the Warsaw winter, it’s a modern style building with plenty to satisfy the gastronome.

Alongside Polish cuisine, you can fill your belly on vegetarian and vegan Indian food, as well as Japanese dishes. When in Warsaw, we couldn’t miss out eating the traditional Kielbasa sausage and fries with pickles, and you shouldn’t either.

Above all, Hala Koszyki is the place where families and friends gather. Whether over a coffee, or a platter of tapas, it’s the energy of the place that keeps drawing people back.

Choose from Polish cuisine or international

Boutique hotels in Warsaw are definitely on the rise, and also going out of their way to impress. Boutique by name, boutique by nature, H15 Boutique Hotel is my choice for Warsaw.

This 4-star hotel is located in a chic area of the city, with plenty of independent restaurants and bars. The hotel’s also within walking distance of the Palace of Culture and Science and Warsaw New Town. Suites are generous, stylish and comfortable, and the service is impeccable.

For a hotel on the luxury side, you can do no wrong by booking a stay at Raffles Europejeski. Inviting décor and attention to detail, plus a jaw-dropping spa, awaits at this Warsaw luxury hotel.

What are your thoughts on Warsaw in winter? Does it look like somewhere you’d like to visit? Drop me a comment below; I’d love to hear from you!

Welcome to my site! I'm Lisa, founder of Following the Rivera. I write primarily for a ‘flashpacker’ audience; a demographic (late 20s onwards) that enjoys glamping over camping, staying at boutique/luxury boutique hotels, sampling the local food and wine, cultural activities, and indulging in a spot of wellness on their travels. Read more here…