Travel back in time

Without running the risk of sounding like my grandmother, I’m really missing the good old days of air travel.

The days of roaming carefree around the airport, sans mask — but always with a bottle of hand sanitizer.

A time when I practiced social distancing in the airport, but simply because I preferred it that way.

An old soul by nature, there’s one thing satisfying my nostalgia for travel days gone by: vintage airline posters.

Bright, bold and very retro, these vintage airline posters are a delight to look at. It makes little difference that I wasn’t alive at the time; just seeing them makes my old travel soul happy.

Ideal for Father’s Day, Valentine’s Day, or just because, these vintage airline posters make a unique, and special, gift. 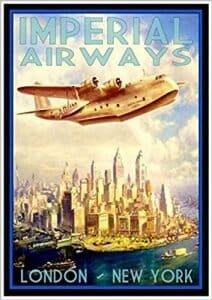 Ever heard of Imperial Airways? You’re not alone.

The British commercial airline operated from 1924 to 1939. It was a pioneer in long-distance plane travel, primarily running flights from the UK to former empire destinations.

One such flight was from London to New Delhi — a journey that would take around 8 days. The airline eventually merged into the British Overseas Airways Corporation (BOAC) in 1939.

This poster shows the popular Imperial Airways flight from London to New York. While no year is stated in the description, its style suggests it could be from the early 1930s.

An A4-sized print, the poster comes is delivered on premium quality glossy photo paper. To protect the poster, it’s shipped in a board-backed envelope and marked ‘do not bend’ on the front and back.

Trans World Airlines, more commonly known as TWA, operated from 1930 to 2001. The American airline only flew domestic routes, before branching out to the rest of the world in 1939.

This poster was designed by renowned American artist, David Klein. He’s best remembered for the travel posters he designed for TWA in the 1950s and 1960s.

This canvas print poster measures 24X16in and is delivered on an 18mm pinewood frame. 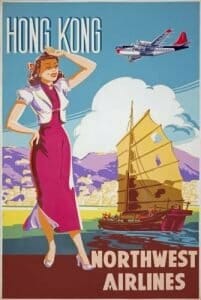 Featuring the iconic Hong Kong junk boat, and a glamorous Chinese woman, is this offering from Northwest Airlines (NWA).

The company started in 1926, becoming a major player in the trans-Pacific market after WW2. Before merging with Delta Air Lines in 2010, NWA carried more passengers across the Pacific than any other US airline.

It first began by transporting mail in 1926 from Minneapolis to Chicago, before switching to passengers in 1927. Its first international flight was to Winnipeg, Canada, a year later.

A high-quality poster, it comes on 180gsm matte photo paper.

Its first commercial flight was from Brussels to London, via Ostend, in July 1923. Sabena Airline’s transatlantic route to New York took place in June 1946, after which it would expand its US destinations.

As shown on the poster, Sabena Airlines operated in conjunction with Braniff International Airways.

The American airline was founded in 1930. It primarily operated routes to the midwestern, southwestern United States, Mexico and Central and South America.

Braniff had several hubs in the US, the main ones being in Dallas, Boston, Los Angeles, Miami and Kansas.

With its wild-western style font and iconic Texan landscape, this vintage airline poster’s a great one for the collection. 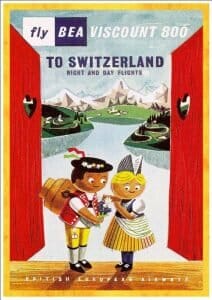 From the days when using stereotype images was the norm, comes this cartoon-style poster from British European Airways (BEA).

The airline operated from 1946 to 1974 before the merger with BOAC to become British Airways.

The Viscount 800 was part of a fleet of British planes which used turbine engines. In fact, BEA operated the world’s first turbine-powered flight with a Viscount 630 prototype from London to Paris.

Post WW2, it became one of the most successful fleets for several reasons. From panoramic windows to comfortable cabin conditions, passengers enjoyed flying BEA.

With elephants, flag bearers and mythical birds, this vintage airline poster from Air India has it all. It’s also one of the only posters that cleverly incorporates its name into its slogan.

The airline was founded in 1932, first named Tata Airlines after the name of its founder, J.R.D. Tata. 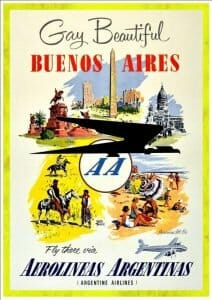 A top 5 destination of mine for years now, I couldn’t not include this fabulous vintage airline poster of Buenos Aires.

Showcasing drawings of the beach, landmarks and its famous gauchos, this poster’s a must for fellow Argentine-philes.

Aerolineas Argentinas was founded in 1949, and is the country’s largest airline as well as its flag carrier.

In late 1950, the airline operated a weekly flight from Buenos Aires to Frankfurt via several cities. These included Rio de Janeiro, Natal, Dakar, Lisbon and Paris.

This glossy poster comes in A4 size and is delivered in board-backed envelopes to avoid any damage. 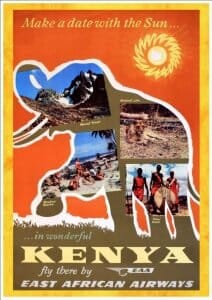 Another vintage airline poster with an elephant taking center stage, this time, of the African variety.

‘Make a date with the sun’ is a fitting slogan for a poster promoting Kenya as a travel destination.

East African Airways (EAA) was founded in 1946, and was jointly run by 3 countries: Kenya, Tanzania and Uganda. Routes were primarily to destinations in the region such as Mombasa, Zanzibar and Dar es Salaam.

The airline launched its first international weekly service to the UK in 1957, which at first was operated by BOAC. EAA later branched out to other European destinations, as well as to countries in the Indian subcontinent. 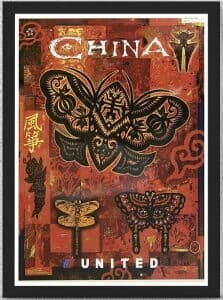 United Airlines was formed in 1931 following a merger of 4 airlines. As of May 2019, United had the third largest fleet in the world, after American Airlines and Delta Air Lines.

With the Oriental-style font and butterfly symbolism, this vintage China poster will brighten up any living space. 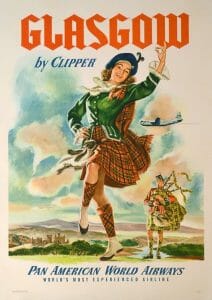 Capturing the charm and spirit of Glasgow is this vintage airline poster from Pan American World Airways (Pan Am).

A young woman dressed in traditional Scottish attire performing a dance dominates the image. In the background, a man plays the bagpipes against the green of the Scottish highlands.

Founded in 1927 in Key West, Florida, Pan Am was the largest international airline of the United States.

The company was famous for its clipper planes that they used in the late 1930s and 1940s. A seaplane service in 1937 launched the service between the US to the UK and France.

What do you think of these vintage airline posters? Is there one that appeals to you in particular? Let me know in the comments below. 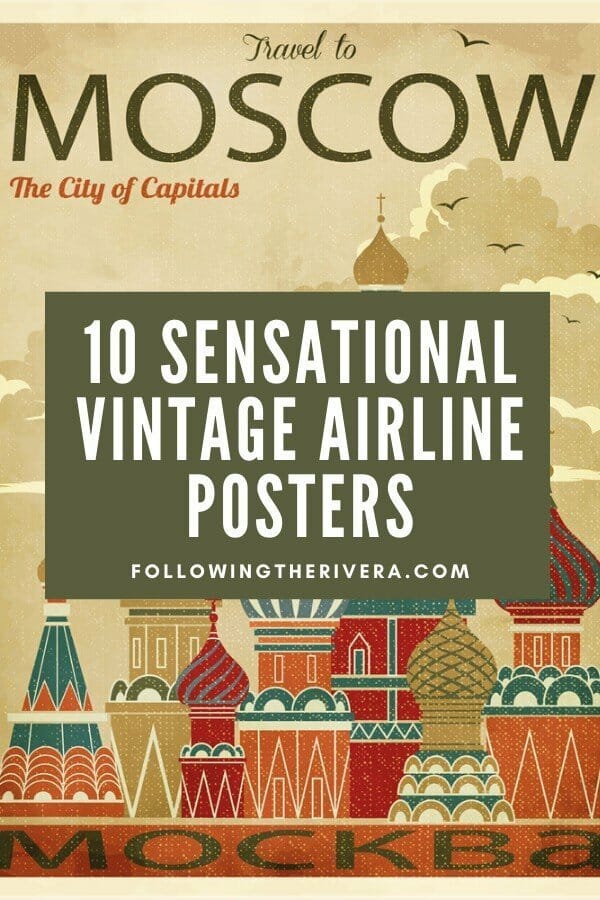