Piazzola sul Brenta | 5 Things To Do

It was a fresh, yet bright autumn day when we visited the small town of Piazzola sul Brenta.

This tiny town in the province of Padova is one of hundreds in Veneto, and across Italy. We drove for about 35 minutes from our home in Vicenza, past miles of flat, green farmland until we reached our exit.

On arriving at its centre, Piazzola sul Brenta looks like any other residential town in Veneto. Traditional Venetian-style homes stand alongside non-descript looking buildings. In truth, there’s nothing in particular that stands out.

It took all of 5 minutes for me to see that my initial thoughts about Piazzola sul Brenta was wrong.

As we made the short walk from our car to the centre, we were stopped by the most magnificent sight.

To the left was a grand stately palace, which I soon learned was called Villa Contarini. To our right, was a semi-circular colonnade (porticoed hemicycle) that curved around the piazza and the manicured lawn in front.

The villa, its grounds and the nearby canal beamed beneath the glorious autumn sunshine.

Seeing the small, yet grand, centre, filled with me the same exuberance I felt when visiting other sights in Italy. Montemerano in Tuscany, Piazzolo Acreide in Sicily and the Basilica di San Pietro in Vatican City are some that spring to mind.

Today, Villa Contarini is owned by the region of Veneto. The venue’s used for events such as weddings and conferences, as well as for indoor and outdoor concerts. 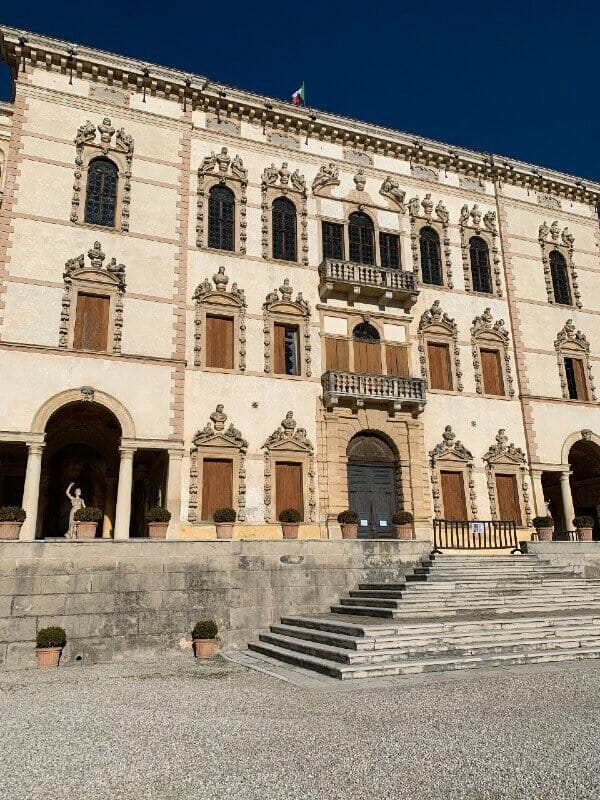 “…peaceful ambience of the gardens at Villa Contarini, married with gentle birdsong does wonders for your mental wellbeing.”

Spread over 40 hectares, you can easily rack up your daily 10,000 steps while exploring Villa Contarini.

During our visit, the villa (interior) was closed to the public given the pandemic. If you’d like to visit soon, you need to book your tickets in advance.*

In spite of this, there was so much to see, and photograph, from the outside, that it wasn’t an issue.

Villa Contarini dates to the 16th century and was commissioned by Paolo and Francesco Contarini. The family was one of the founding families of Venice, and one of the oldest families of the Italian nobility.

The façade of Villa Contarini follows a mostly Baroque style. However, you can also find some Gothic architectural elements such as the main house exterior. Its windows, arches and overall style resemble the canal façade buildings you see in Venice.

The chapel at Villa Contarini in Piazzola sul Brenta

To the left of the grounds is a detached chapel, built in a Neoclassical style. One of my favorite highlights of Villa Contarini is the right wing (barchessa). The detailing on the exterior is intricate and immense, and I probably spent the longest time here looking over everything.

Explore the grounds at gardens at Villa Contarini

Though it was slightly disappointing that the main house was closed, we were still able to visit the gardens.

Tickets cost €4 (£/ $) per person to enter and there was zero waiting time. On a crisp, yet radiant fall day, exploring the gardens was the perfect way to spend a late morning outdoors.

A friend of ours told me that the villa’s garden-facing exterior wasn’t as impressive as the front facing. She wasn’t wrong.

The other side of the villa

As you cross over to the other side (garden), it’s disappointing to see the lack of architectural detail. However, what it loses in its façade, it more than makes up for in the surrounding grounds.

A grand stone staircase leads to hectares of green grassland. Depending on the route you take, you’ll either meet a grand lake filled with ducks, or kilometres of leafy woodland.

The peaceful ambience of the gardens at Villa Contarini, married with gentle birdsong does wonders for your mental wellbeing.

Enjoy the nature and surroundings at Villa Contarini

4. Have refreshments beneath the porticoed hemicycle

As you exit the gardens and return to the piazza, cross the road to the semi-circular colonnade.

Interestingly, the porticoed hemicycle was never completed — a detail that an ignorant me would never have realized had I not been told.

Beneath the porticoed hemicycle are bars, cafes and shops, most of which offer indoor or outdoor dining.

Stop for a coffee break

We stopped here after our visit for a cappuccino and some pasticcino, in other words, a classic breakfast in Italy.

The choices of places to eat and drink are slim given that Piazzola sul Brenta is small. However, I can assure you that you’ll find something you enjoy, this is Italy after all.

Every last Sunday of the month, the piazza at Piazzola sul Brenta transforms into an antiques treasure chest.

The Mercatino dell’Antiquariato di Piazzola sul Brenta is considered to be one of the best antiques markets in Italy.

Around 800 exhibitors arrive to set up market stalls, selling everything from vintage furniture to rare comics.

The canal in front of Villa Contarini

The antiques market at Piazzola sul Brenta began taking place in Anfiteatro Camerini in 1979. Since then, it’s only grown in popularity, for buyers and browsers alike.

Whether you come to buy, or look, the backdrop of Villa Contarini makes the Mercatino dell’Antiquariato di Piazzola sul Brenta unlike any other.

What do you think of Piazzola sul Brenta? Would you like to visit this palace in Veneto, Italy? Let me know in the comments.

*correct at the time of publishing.

Disclosure: This is a collaborative post. It may contain affiliate links, which means I may receive a commission if you click a link and purchase something that I’ve recommended. Thank you for your support. 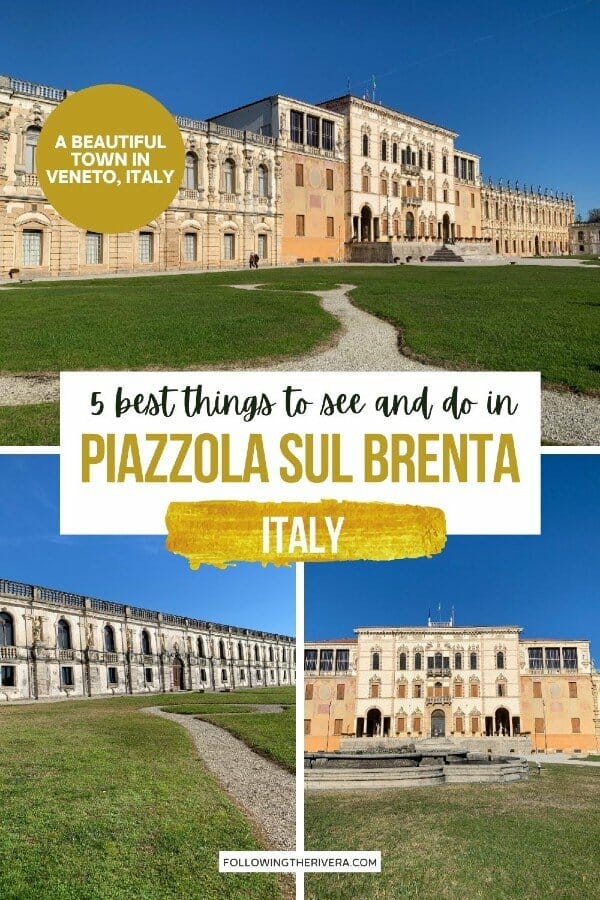