Montagnana and Este | 8 best things to do 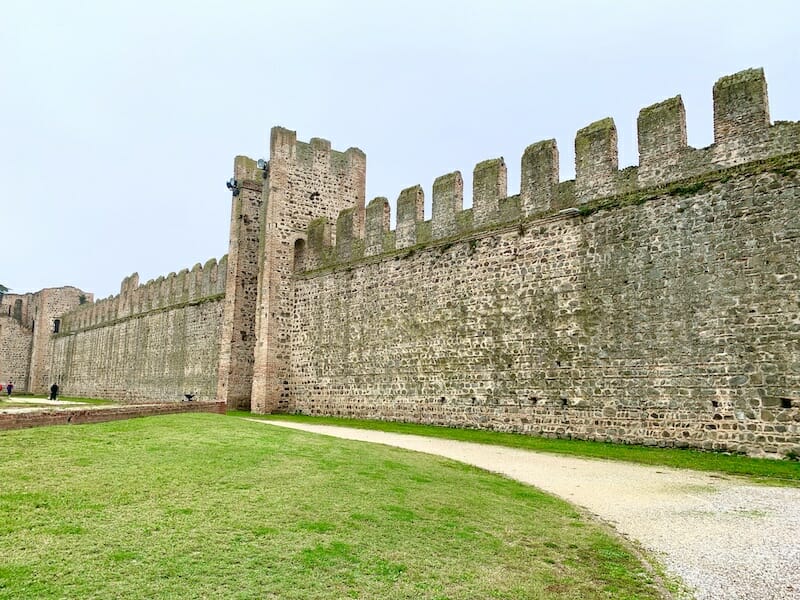 Montagnana and Este Padova— 8 things to do

Despite popular belief, we’re not always blessed with the best weather in Italy, especially in the north.

Take for example, our recent trip to Montagnana and Este. Grey skies dominated the duration of our day, but the gods thankfully spared us from any rain.

Montagnana and Este are 2 small cities in the province of Padua (Padova) in northern Italy. Padua is also home to the charming Piazzola sul Brenta and its main star, Villa Contarini.

To give you an idea of their geography, Verona is to the west, while Venice is to the east.

Montagnana and Este have striking similarities, in that prominent medieval walls surround each city.

In Montagnana, the city centre lies within the castle walls. In Este, there are the walls that surround the castle and a separate entrance to the centre. Another thing both have in common is its size. Montagnana and Este are both small cities, and approximately 25 minutes apart by car.

That said, visiting both places make a great day trip. They also give you an up-close look into local small-town life.

Things to do in Montagnana

We visited Montagnana early morning on a Sunday. Even without any sunshine, the walls surrounded by a glossy green lawn are a captivating sight from afar.

Built in the 11th century to protect the town, the walls in Montagnana measure 2km in length and 8m in height.

Arriving early on a Sunday morning, we didn’t have any trouble in finding parking. This may not be the case if you visit later in the day, or even on a Saturday.

The heart of the city — Montagnana Este Padova

Medieval walls and beneath the arches in Montagnana

“…visiting both places make a great day trip. They also give you an up-close look into local small-town life.”

Like many cities across Italy, its grand piazza is usually its centre point. And, in Montagnana, Piazza Vittorio Emmanuele is a good starting point.

The size is pretty impressive for a small city. Its focal point is its Duomo di Santa Maria Assunta. Built in the 15th century, it follows Renaissance and Gothic architectural styles.

Arches in the streets of Montagnana

Inside are several notable works of art, including the Transfiguration by Paolo Veronese and the fresco of the apse painted by Giovanni Buonconsiglio.

An unusual feature about the Duomo is its bell tower. Unlike other cathedrals, this bell tower’s detached from the main building and is located next to Porta Vicenza.

While its form and name take on the castle title, Castello San Zeno — like many castles around Italy — serves another purpose.

Located near Porta Padova, the castle’s also home to a tourist office, civic museum, historical archive and a historical centre.

Many of the castle’s original features are no longer there. However, you can still see signs of an internal moat and arches.

Montagnana is home to several palaces, though they’re much smaller than what you’d expect a palace to be.

Take Palazzo Valeri and Monte di Pietà. Both date to the 18th century, and showcase a fine example of the architecture of the time. Today, both are home to local banks.

The chimneys at Palazzo Zanella in Montagnana

Another palace that takes on the medieval style is the Palazzo della Cassa di Risparmio. However, unlike the first two, this palace isn’t what it seems. Built in 1924 after a devastating fire, they wanted to recreate the medieval look and feel of the existing buildings.

Located near Porta Vicenza is Palazzo Pomello Chinaglia. Differing from the classic Venetian style of the time, the palace adopts a traditional Umbrian structure.

The palace was home to several wealthy families of the period, which would later include the Pisani family. They would come to instruct Padova-born architect, Andrea Palladio, to build a larger villa outside the city walls.

If you’ve time to visit, Villa Pisani sits just beyond the walls, close to Porta Padova.

While in Montagnana, I’d encourage you to try one of the cafes in the centre. There are plenty to choose from, offering everything from coffee and brioche, to wine and light snacks. 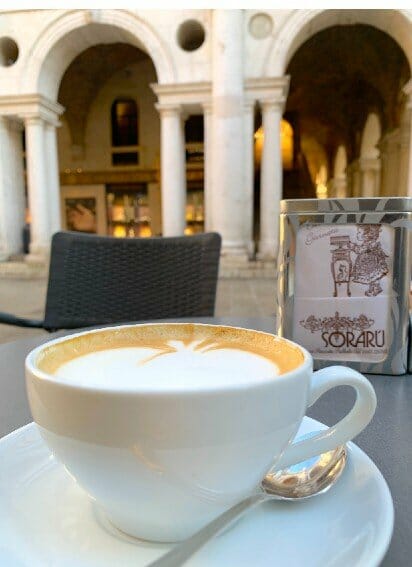 Stop for a coffee while in Montagnana

Things to do in Este Padova

You get a sense of déjà vu when approaching Este.

As I mentioned in the introduction, it too has prominent medieval walls, though not as large as in Montagnana.

For a castle built in the 14th century, and that was destroyed several times in battle, Castello Carrarese isn’t faring too badly.

Twelve of its 14 towers are still intact, and the former palace building now houses the Atestino Museum.

Walls of Castello Carrarese in Este

For me, the highlight of Castello Carrarese are the gardens. Open to the public, it’s rich in flora and fauna, and reminiscent of a renaissance-style garden.

Stone statues in the gardens at Castello Cassarese in Este

Wander the pebble-lined paths and admire the stone statues and grand trees overhead. Within the gardens, there’s also a café and a play area for children.

The gardens at Castello Carrarese

Among its historic buildings and Venetian architecture, Este is like many other small cities in Italy.

At its heart is Piazza Maggiore. A square filled with shops, cafes and restaurants, it’s a popular meeting point for many locals. It’s also here where you’ll find the 17th century town hall building with its impressive loggia.

Stop by Salotto 38 in Este for a late breakfast

We stopped for a late breakfast at Salotto 38. More of an upmarket bar and café, our breakfast of cappuccinos and brioche went down well.

There was also a market (selling food and other goods) in Este on the day we visited. Fruits and vegetables were fresh and locally produced, and also incredibly cheap.

As you wander further into the centre, you eventually reach a great archway with a magnificent clock face.

This is the Torre Civica di Porta Vecchia, or the civic tower of the old gate. It dates to the end of the 17th century and stands on the site of the previous gate, which was destroyed.

There’s not much more to say, other than it’s something you shouldn’t miss seeing when visiting Este.

4. Step inside the Duomo

The Duomo of Este, also known as Santa Tecla, is the city’s principle church. Sources say that the church’s site dates to the 4th or 5th century.

Since then, the church has been refurbished several times, most notably after an earthquake damaged the building in 1688.

Inside Santa Tecla in Este Padova

Above the altar is an 18th century painting by Giovanni Battista Tiepolo. It shows the story of Santa Tecla praying for the plague to end in Este.

I’d be stretching the truth if I told you that Santa Tecla left a great impression on me. However, while it’s nowhere near the likes of the Duomo di Siena, it’s still worth taking a look.

Outside Santa Tecla in Este, Padova

Where to stay in Montagnana and Este Padova

Visiting Montagnana and Este is an ideal 2-for-1 day trip in Padova. There’s enough to see in 1 day, or you can space it out, if you prefer, over 2 days.

What are your thoughts on Montagnana and Este in Padova? Which of the two would you most like to visit? Let me know in the comments below.

Disclosure: This is a collaborative post. It may contain affiliate links, which means I may receive a commission if you click a link and purchase something that I’ve recommended. Thank you for your support.