What to see in Ragusa and Modica | duomos and chocolate 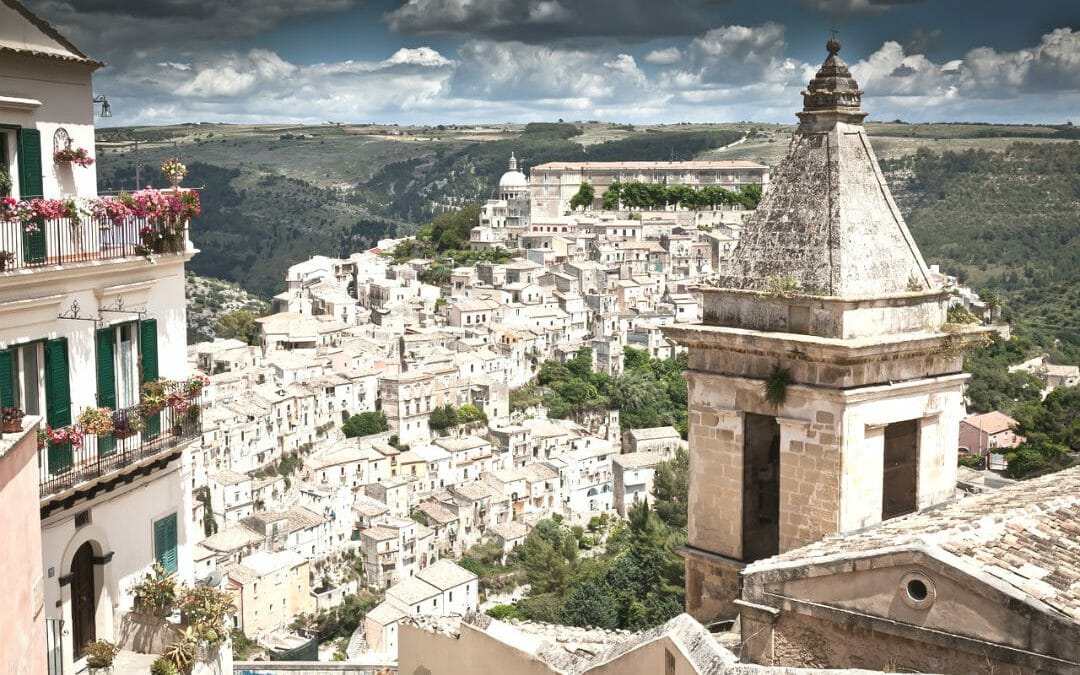 What to see in Ragusa and Modica: 1 easy day trip

Table of contents hide
Arriving in Ragusa
1. See Duomo di San Giorgio in Ragusa
2. Explore the streets of Ragusa
3. Have lunch at Locanda Don Serafino
Map: what to see in Ragusa and Modica in 1 day
4. Discover churches and chocolate in Modica
5. Visit Duomo di San Pietro
Where to stay near Ragusa

From our base in Noto, we traveled to Ragusa and Modica.

These small towns in the south of Sicily are exactly as you’d expect, and a reminder of its historic past.

There’s really no way of getting around Sicily than by car. That said, you’ve either got to hire one, or find a tour company that’ll take you there. The journey takes around 40 minutes from Noto, and you’ll see plenty of the arid yet pretty Sicilian countryside.

Take note of the lemon and olive trees, as well as the old stone structures, that whizz past your window. These are muragghi, stone constructions that were built to keep rocks from clogging up the field.

When you eventually spot Ragusa in the distance, it almost feels like a mirage. From afar, the city looks majestic, with a sense of mystery and intrigue that builds the closer you get.

It’s a feeling that intensifies when you’re on the winding road driving up to the heart of the city.

Related post – Where to find Sicilian Baroque architecture in Noto

The earthquake in Ragusa 1693 split the city of Ibla in 2, with some of the buildings re-built in Baroque style. However, you can also see the older pre-earthquake buildings. Walking around and exploring the city is a must — just try to do this early morning, before the sun gets too hot.

The number one attraction most people flock to see in Ragusa are the mesmerizing duomos in the city. The Duomo is the principal church or cathedral in every Italian town or city.

Start at the Duomo San Giorgio in Piazza Duomo, or the Cattedrale di San Giovanni Battista. Both are perfect examples of Sicilian Baroque architecture.

More than a church — what to see in Ragusa and Modica

The interior itself is impressive as is the wondrous ceiling. Upon visiting, we were witness to the preparations for a wedding and so decided to pay our respects by leaving.

2. Explore the streets of Ragusa

If you’ve no itinerary to stick to, I recommend getting lost in the small streets around Ragusa.

We came across a workshop that wasn’t only selling local crafts, but also restoring them. We spotted a traditional carrotero (Sicilian cart) and a Fiat 500 adorned in colorful Sicilian print. 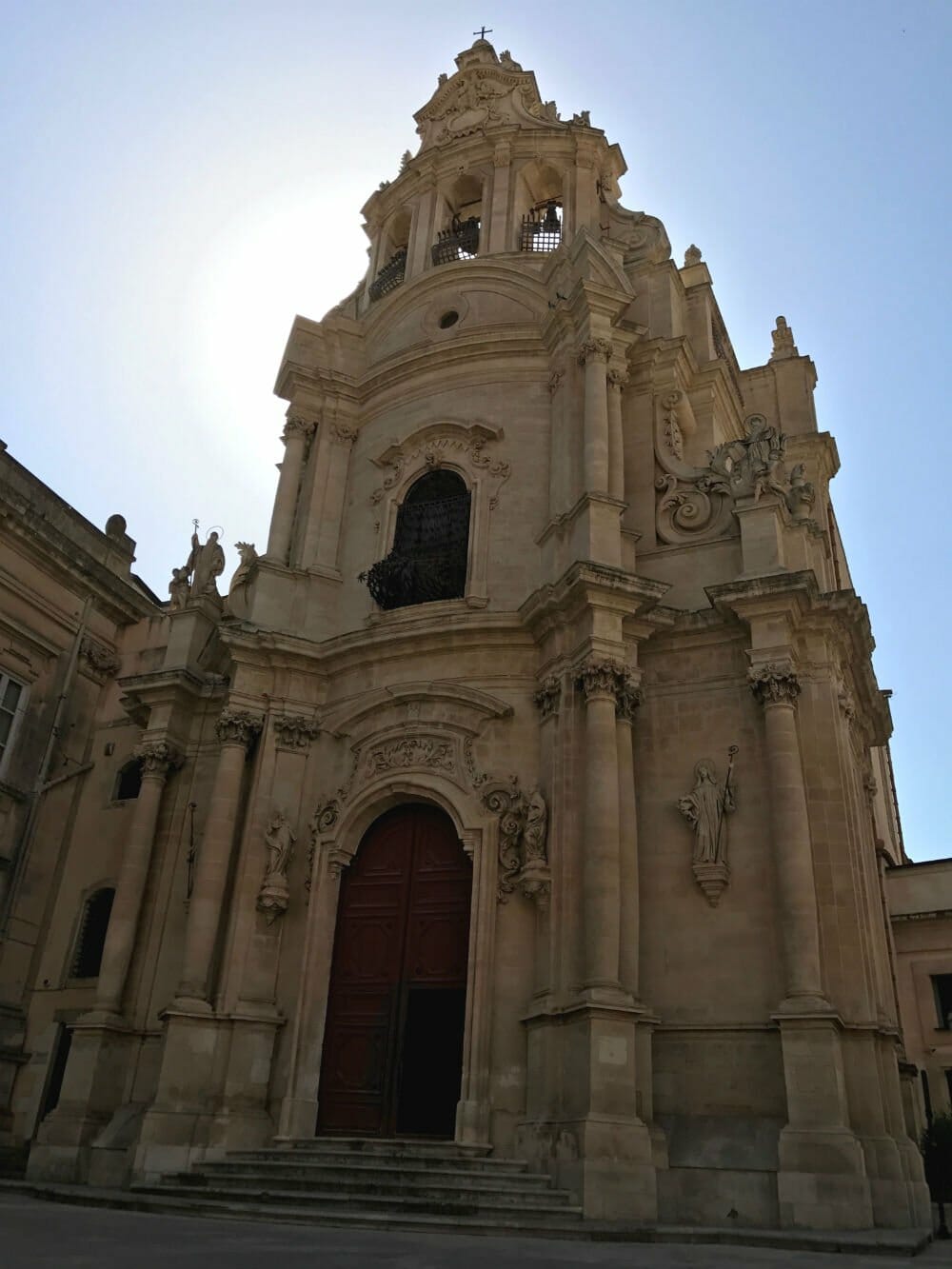 3. Have lunch at Locanda Don Serafino

When in Italy, finding somewhere good, and something delicious to eat, is never hard. And, when in Ragusa, I urge you to stop for lunch at the exquisite Locanda Don Serafino.

You’ll find the restaurant adjacent to the UNESCO site of La Chiesa del Miracoli, a church from the 17th century. With 2 Michelin stars to its name, the quality, as well as the prices, is better than a regular trattoria.

The food here is nothing short of excellent, which I think shows from my photos. On top of this, the ambience matches the restaurant’s high standard, in no less than a cave-style environment. Locanda Don Serafino is also part of the striking boutique hotel of the same name.

Map: what to see in Ragusa and Modica in 1 day

4. Discover churches and chocolate in Modica

The pretty town of Modica is around 20 minutes by car from Ragusa. It’s much smaller in size, but with just as much character as its closest counterpart.

Modica used to be an old walled town when the Arabs ruled. However, the era of baroque architecture would soon replace any signs of its former rulers.

Come for the chocolate — what to see in Ragusa

Modica’s most famous export is its chocolate.

You’ll see plenty of shops selling it when walking around town, but the best quality is at Antica Dolceria Bonajuto. The chocolate has a grainy texture to it, and a robust taste, and may not be to everyone’s palate.

We, on the other hand, ended up taking home 3 chocolate bars. This included Massa di cacao 100%; Cioccolato Salinae and Cioccolato Mascobedo.

Its striking baroque edifice and stone sculptures stop you in your tracks, demanding your full attention. With 250 steps to reach the top, be sure to have your ‘Rocky’ moment when you get there.

Related post – What to see in Vicenza – 4 striking examples of Palladian architecture
The Duomo di San Pietro, for me, is on par with the cathedral in Siena and also in Florence. From the stained yellow façade of the stone, to the intricate detailing inside, it’s one duomo you shouldn’t miss when in Modica.

Another selling point about visiting this duomo, is that there were no other travelers around.

All in all, seeing Ragusa and Modica is possible to do in one day, and is the ideal day trip from a base in Noto.

“Another selling point about this Duomo, is that there were no other tourists around.”

Where to stay near Ragusa

Make the most of your time exploring Noto, Ragusa and Modica with a stay at the fabulous Seven Rooms Villadorata. This boutique hotel’s in the heart of the historic center in Noto, and a good base for your Sicily travels.

Alternatively, you may be interested to try glamping in Sicily. IUTA Glamping & Farm is around 2km from Noto city centre, and gives you a taste of Sicilian nature.

Have you ever visited Ragusa or Modica? If so, what were your highlights? Let me know in the comments below.