When I traveled to the Bahamas, I had a fun time learning some of the local Bahamas words and phrases.

Though I made many mistakes, it’s something the locals didn’t seem to mind. After all, the Bahamian slang and dialect isn’t an easy one to master!

However, trying to converse in their language was probably the best icebreaker to connecting with them.

Attempting to speak in the local dialect can also put a smile on the longest of faces.

In Italy, it always surprises me how many people’s face light up when I begin speaking Italian. Sure, my grammar needs work, and the order of words is sometimes incorrect, but they appreciate the effort.

When I wrote about 5 Sicilian words and phrases, I didn’t realize how well it’d be received. It turns out that many people were as keen as I was to learn about the language.

Since then, I’ve also learned, and written about, several words and phrases of the Veneto language.

For my third post in the linguist series, we’re moving away from all things Latin and going Caribbean.

Heritage of the Bahamian dialect

During my stay on Long Island in the Bahamas, I came across a language with a sound unlike any other. I could recognize it was English, but this version had a different twist.

In the Bahamas, the people speak 2 forms of the English language: Bahamian Standard English and Bahamian Dialect.

Educated Bahamians speak the former, which is similar to the English they speak in the UK and the US.

The latter’s a descendant of the language, drawing on its roots from African and European heritage.

A local form of English — Bahamas words and phrases

Bahamian dialect comprises of English, as well as their own vocabulary and sentence forms.

Bahamians like to end questions with ‘ey’ or ‘hey’. For example, ‘she likes that boy, eh?’ is a question seeking information. They add ‘hey’ to the end of a question when seeking agreement.

In Bahamian dialect, some sentences that are usually passive in standard English become active. For instance, rather than ‘is it good to eat?’, they would say ‘that could eat?’

Double up — Bahamas words and phrases

Go double with your use of adjectives. This is one fun characteristic of the language that’s common of the Bahamian dialect.

Instead of using ‘very’ or ‘extremely’, they will repeat the adjective twice. ‘She is pretty-pretty’ or ‘it’s cheap-cheap’ are 2 examples.

The islands in the Bahamas are stunning, but don’t overlook its capital, Nassau.

A local tour is a great way of learning more about the city, and is ideal for all types of travelers. The rum tasting is particularly good fun, but of course, is for adults only.

This is basically a way of saying a woman’s pregnant. When you hear someone say a friend/relative is ‘big-up’, it’s time to start thinking of baby gift ideas.

A phrase that can relate to many things, in Bahamian dialect, it relates to the derriere! There are many words that relate to this part of the human anatomy, speaking of which….

This is probably one of the most popular Bahamian words, and yes, it again refers to the lower region. The bigger the boonggy, the better the compliment.

So, if you hear ‘peas n rice boonggy’, chances are there’s a generously sized one close by. It’s usually used in a lighthearted context, but if you hear ‘sit your boonggy down’ it may be less so.

For anyone envisaging a soup with a cuckoo floating on top, you’re far off.

This lighthearted Bahamian saying is basically a love potion to ‘tame’ men of a marrying age. If you can lure the guy in with your soup, and he eats it, there could be a wedding on the cards.

However, long after, when arguments arise, the husband may just say to his new wife ‘you musse cuckoo me!’

This fun-loving phrase has the same meaning as the Spanish’ ‘borracho’, the Italians’, ‘ubriaco’ and the English’ ‘drunk’.

Get too carried away with the alcoholic beverages, and you too could be ‘kerpunkle up’.

“No matter your upbringing, it’s the language that most Bahamians use every day.”

For most Bahamians, ‘nanny’ doesn’t refer to the person who looks after your children.

In fact, some use the word to refer to human and animal waste. Saying that, be careful how you use this one.

Similar in spelling to the standard English version, something, or someone ‘ogly’ is unpleasant to look at.

If you hear something/someone is ‘ogly as sin’, it’s 10 times worse.

This is a favorite used among parents, especially mothers of young boys. To tell someone to ‘stop skylackin around’ is a warning to behave before someone gets hurt.

No-one like a show-off, and especially not in the Bahamas. ‘You like to show sef, eh!’ refers to someone who likes to flaunt themselves in front of others.

It can also refer to someone who’s bold in nature.

Get dressed in your best outfit and hit the town to ‘go spilligating’.

To spilligate is all about having a good time and spending your money without thinking.

While you think you may understand the meaning of stench, it’s what we’d call a ‘false friend.’

‘To stench’ in Bahamian dialect refers to someone being stubborn and not budging on their opinions.

Although the actual meaning is far from funny, this phrase highlights the Bahamian sense of humor.

If someone’s joined the ‘stiff-toe gang’, membership is forever, because it means that somebody’s passed.

If you incorporate this word into your Bahamas vocabulary, you’ll be well on your way to speaking like a local.

Coming from the word ‘directly’ ‘I’ll be there terreckly’ can mean the former, or similarly, soon.

I love this word, as it brings me back to the Bahamas straight away whenever I hear it.

In case you can’t see it, the word derives from ‘thing.’ You can use ‘t’ing’ or ‘tingum’ to replace nouns, or even people!

‘She get new dress an’ t’ing’, and ‘bring me the tingum from the bedroom’ are 2 examples.

If someone says you like to ‘tote news’, it’s best to get your boonggy moving!

In short, they’re accusing you of being a gossip, so if you’ve been talking around town, they’ll know it.

Where to stay in the Bahamas

There are tons of great accommodation options, and islands, to stay in the Bahamas.

“Go double with your use of adjectives. This is one fun characteristic of the language that’s common of the Bahamian dialect.”

We chose to stay at the 4-star Cape Santa Maria Beach Resort on Long Island, mainly for its remote location.

However, you may also want to consider the French Leave Resort on Eleuthera.

It has grand elegant rooms, sea views, superb dining and is surrounded by tranquility.

For those seeking a luxury experience, you can do no wrong with Kamalame Cay.

It takes a little effort to reach, but this private island off the central coast of Andros Island is worth the trip.

It has its own overwater spa, tennis court, marina and beachfront villas.

What did you think of this list?! Is there anything that stands out, or you find particularly fun? Let me know in the comments below. 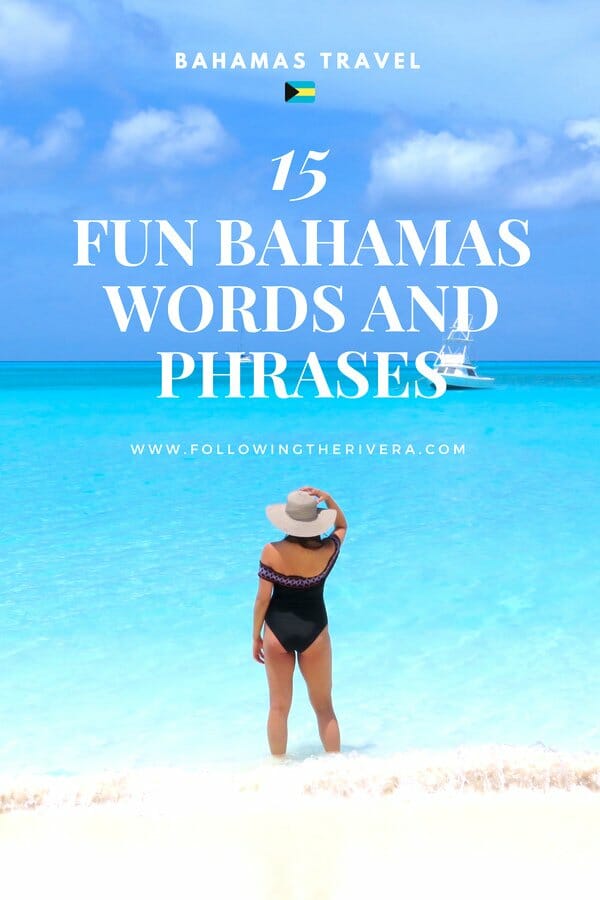 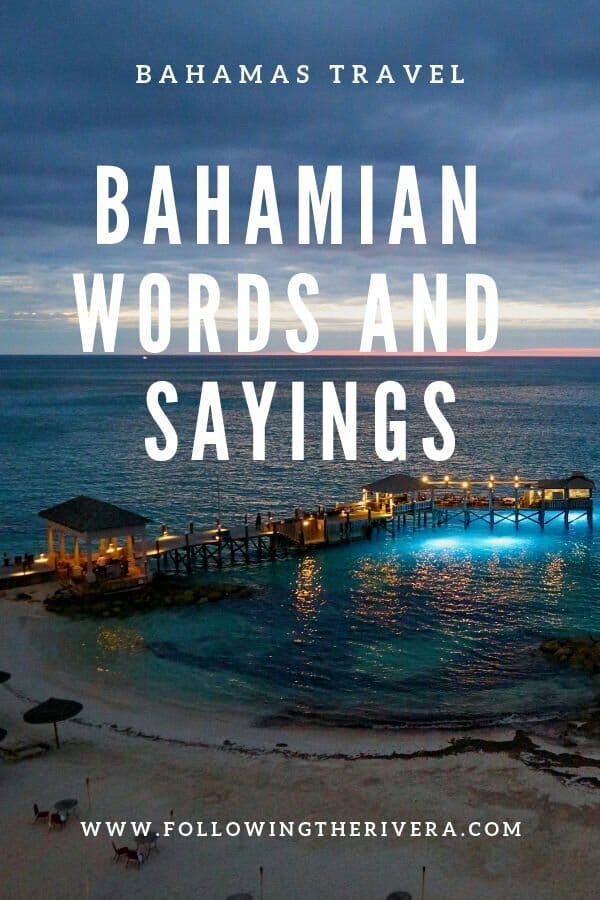 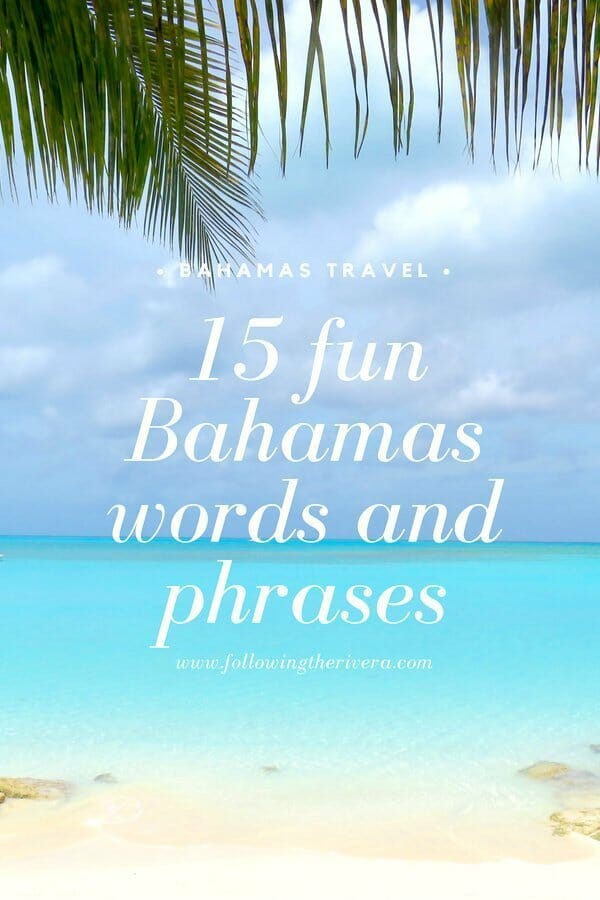