A beautiful village in Tuscany, Montemerano 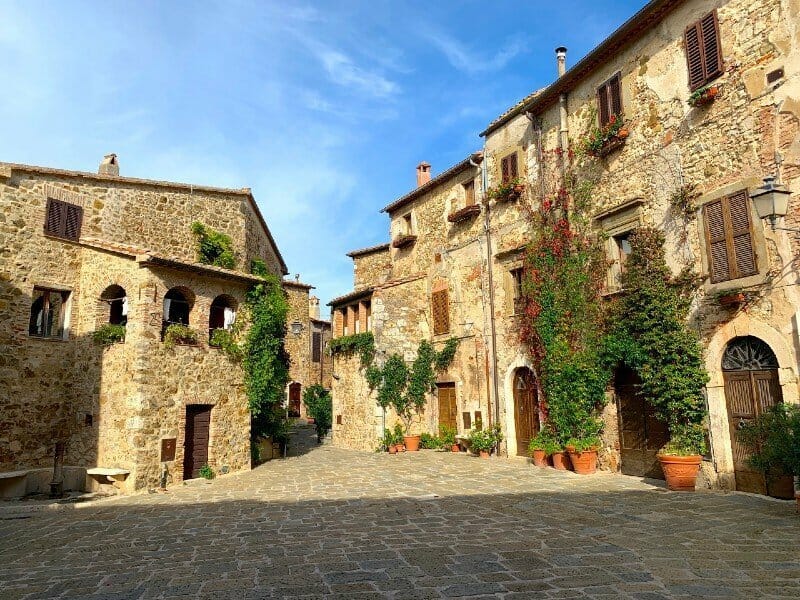 A village in Tuscany — 17 beautiful photographs of Montemerano

Many of you are most likely familiar with the bigger cities in Italy, such as Rome, Florence and Milan.

But, as interesting as it is to visit these well-known cities, I find the smaller Italian towns more interesting.

Montemerano is one such place. This small village in Tuscany may not have a grand Duomo at its center. But, what it lacks in quantity, it more than makes up for in charm.

Perched high on a hilltop, Montemerano is surrounded by the glorious green landscape of the Maremma in Tuscany. The village sits within the commune of Manciano, which is in the province of Grosseto in western Tuscany.

Montemerano — a small village in Tuscany

Montemerano is one of many ‘borgos’ in Italy. It’s also been awarded the title of ‘uno dei Borghi più belli d’Italia’. In English, this translates to ‘one of the most beautiful borghi in Italy.

The entrance to Montemerano is off a curve off the winding main road.

In truth, I didn’t notice anything particularly unique as we parked the car. Aside from a bar frequented by a couple of patrons sitting outside, it struck me as another Italian town.

Of course, I was proven wrong as we walked down Via Italia Montemerano, past the bar and into the village. Its medieval past easily recognizable, we were instantly moved by what was staring back at us.

Stone houses, cobbled streets and balconies overflowing with flowers greeted us as we walked deeper into the village.

I should also mention, that we visited in the afternoon, a time when most services are closed in Italy. Its deafening silence only reinforced the feeling that you were stepping back into an era gone by.

Entrance to Montemerano, a small village in Tuscany 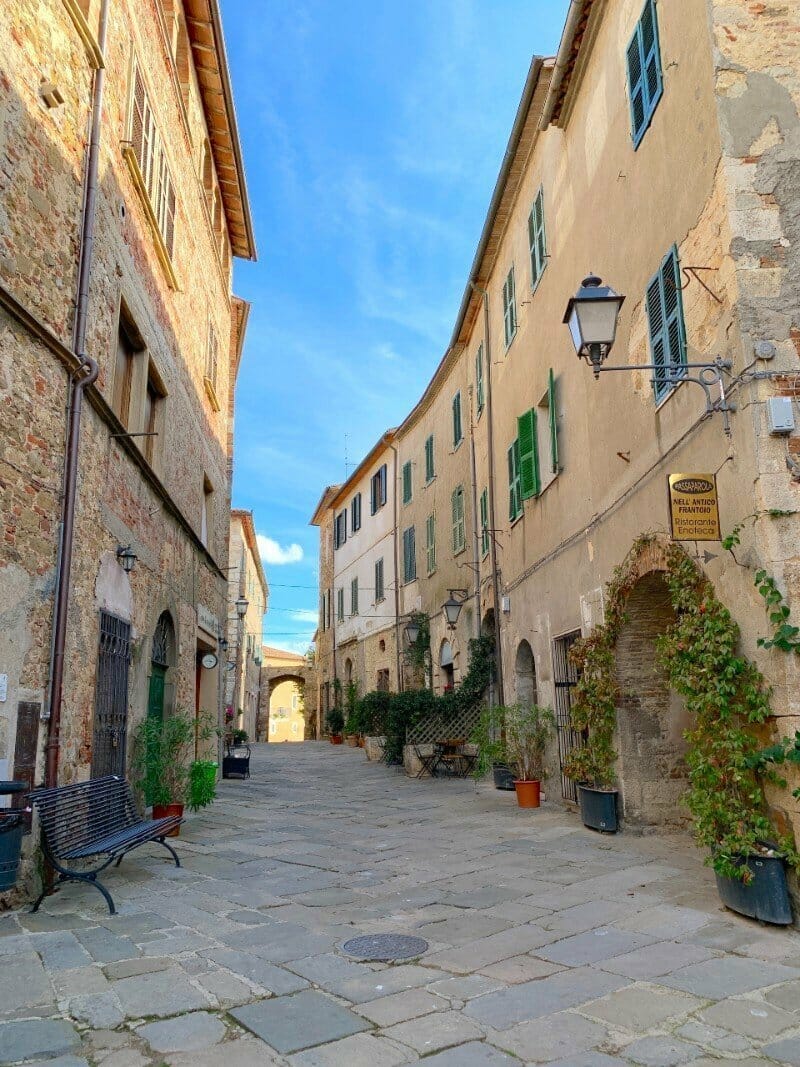 Wander through the streets of Montemerano in Tuscany

What to see in Montemerano

Truthfully speaking, there isn’t much to see in Montemerano in the way of famous landmarks. However, saying that, its charm will knock your socks off, making you happy that you chose to visit.

As you continue walking down Via Italia Montemerano, you’ll notice another incline to the right.

A sign indicates the way towards the Piazza del Castello. Unchanged since the Middle Ages, this castle square was the largest and most important in Montemerano. Soldiers stationed in the fortress used the grounds for training, and its position was significant in case of assault. 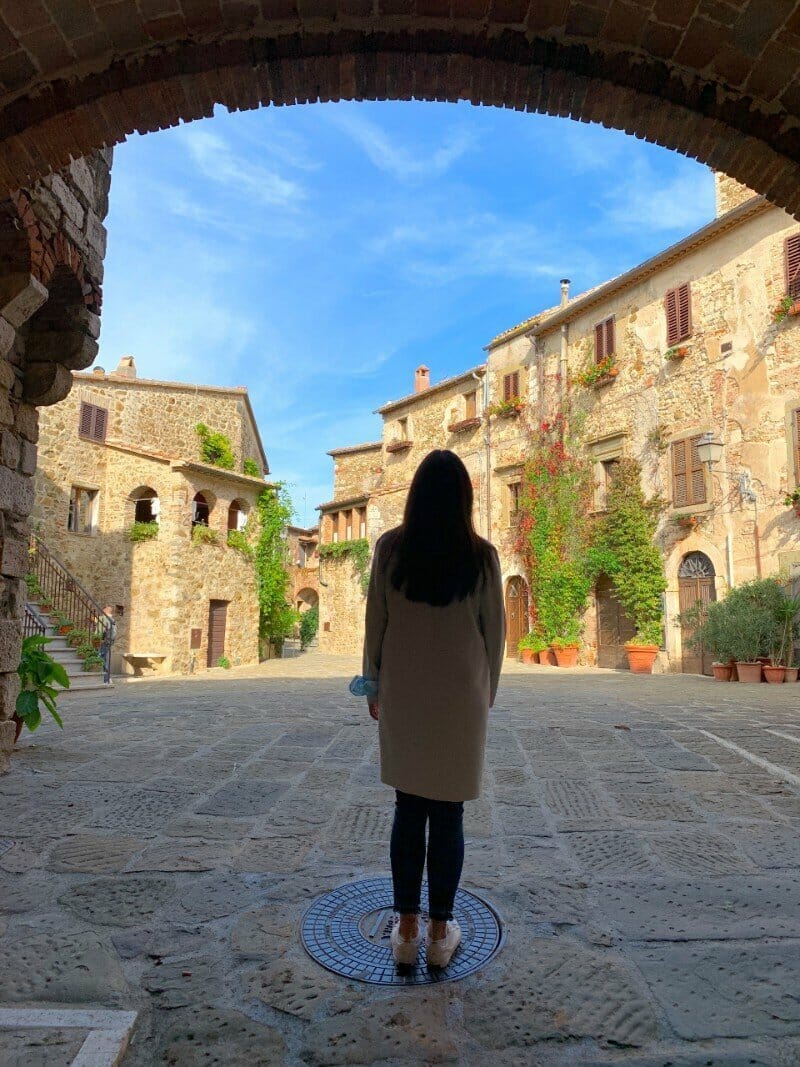 Even more beautiful under the Tuscan sun, Piazza del Castello

As pretty as a picture — village in Tuscany

At this point, you may be picturing a grand piazza, similar to what you’d find in Venice or Orvieto, Umbria.

Instead, you’d be greatly mistaken. The incline leads to an archway with an opening onto a spectacular little piazza.

Traditional pretty stone houses decorated by vines, flowers and plants beam under the Tuscan sun. Its historic doors, arched windows and shutters only add to the romance of it all.

In short, the scene perfectly epitomizes what you’d expect a village in Tuscany to look like. 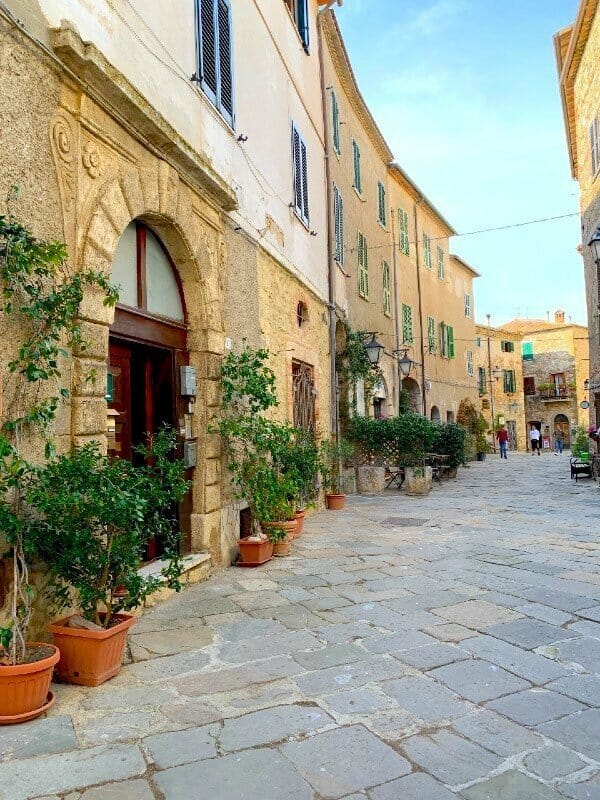 Pretty at every turn, the streets of Montemerano 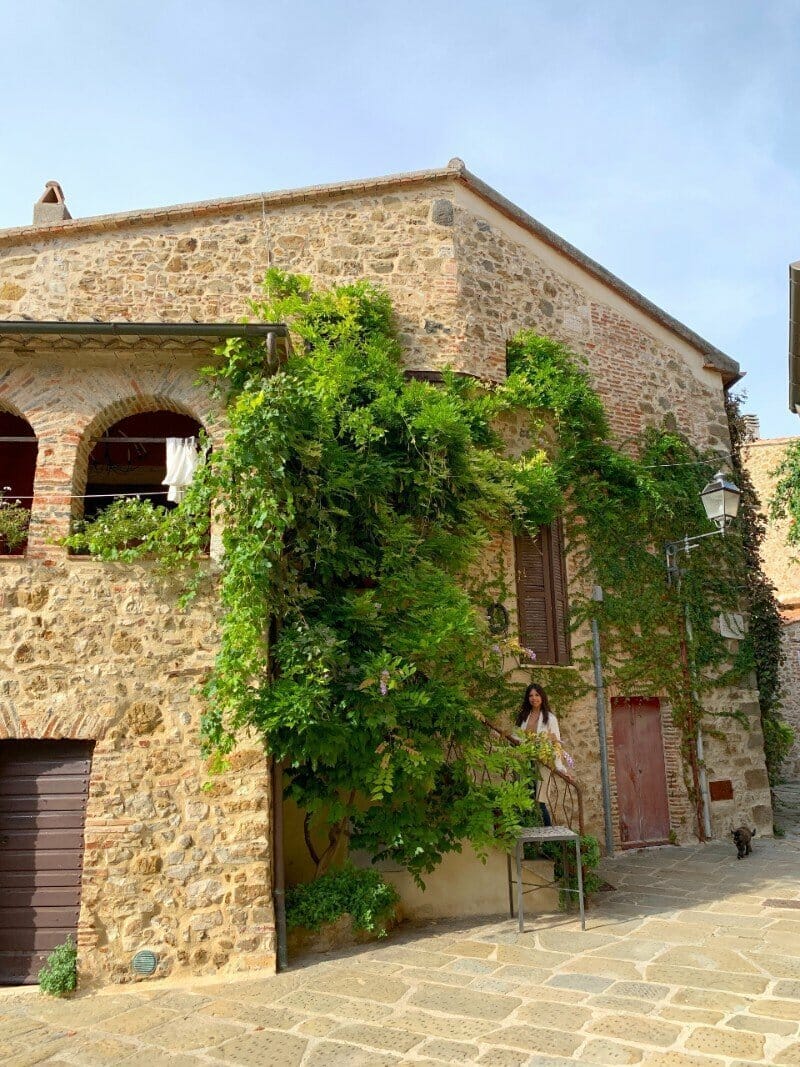 How pretty is this house?

With no guide or route, half the fun of visiting Montemerano is getting lost within its alleys and streets.

It was by chance that we came across a building that was once the parish church of San Lorenzo. Though nothing stood out at first glance, we saw a white plaque above a door with blue writing.

It read: ‘qui il tempo si è fermato e si ascolta il silenzio’. Simply put, it means, ‘here is where time has stopped and you can listen to silence. A poetic phrase that sums up the atmosphere of Montemerano, it’s one stop you shouldn’t miss. 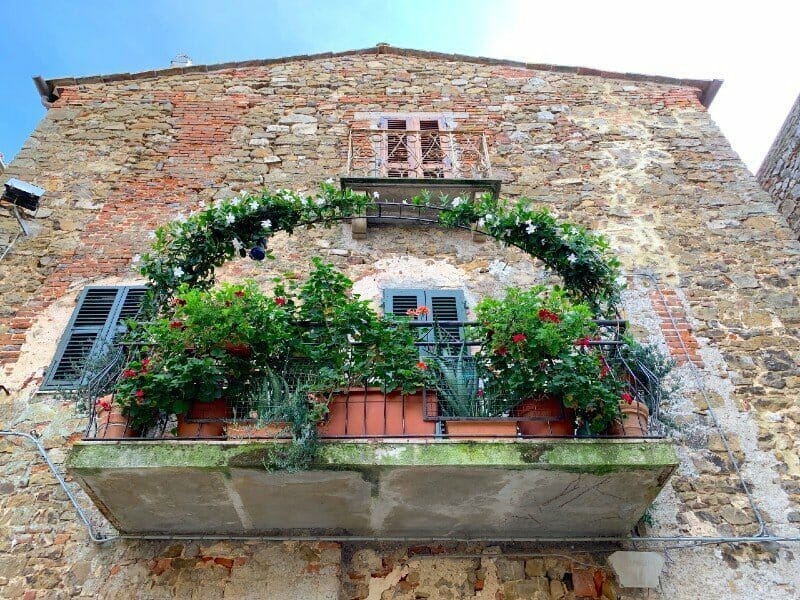 The historic church of Montemerano

In the northern part of the village, you’ll eventually find yourself standing in the Piazza della Chiesa. Slightly larger than the Piazza del Castello, its star attraction here is the Chiesa San Giorgio (St George’s church).

Dating to the 14th century, Chiesa San Giorgio doubles up as a church and an art gallery. Inside, it houses an impressive, and invaluable, collection of Renaissance art, most notably the Madonna della Gattaiola. 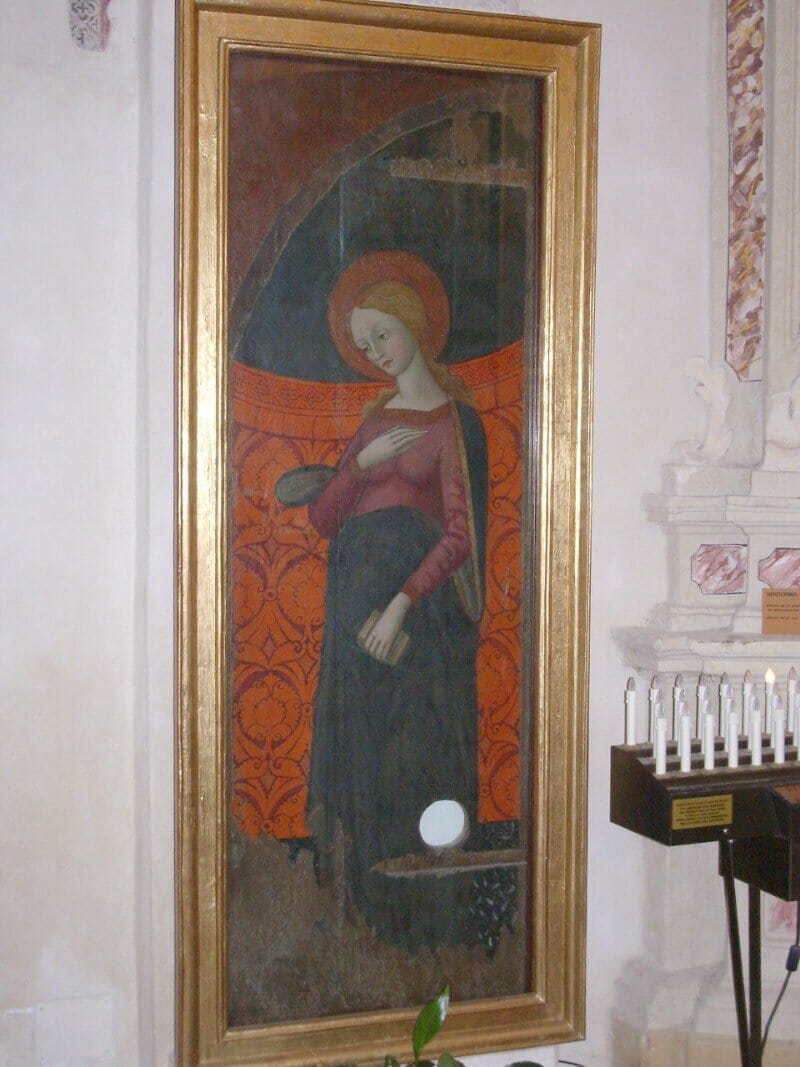 The painting of Madonna della Gattaiola, with a unique difference

The cat lady of San Giorgio — Montemerano village in Tuscany

As you cast your eyes over the colorful painting of the lady Madonna, you’ll notice something peculiar towards the bottom. A round circular hole rudely disrupts the Renaissance work of art.

Sources aren’t sure that it was the painter who did this intentionally. Instead, another story suggests that it was actually a priest who used the painting as a warehouse door. If that wasn’t strange enough, he made the hole in the painting to allow cats to pass through.

And so, the painting came to be known as the Madonna della Gattaiola, or Madonna of the cats (gatti). 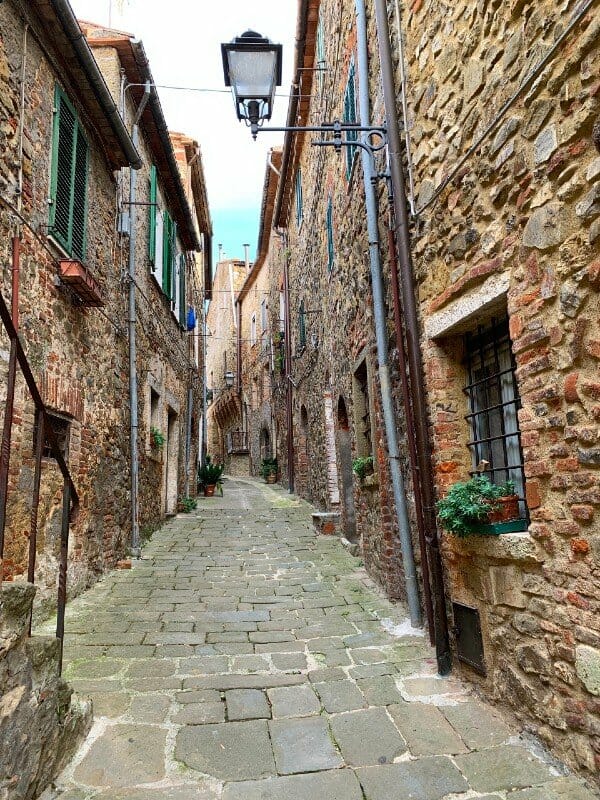 Many alleyways to get lost in 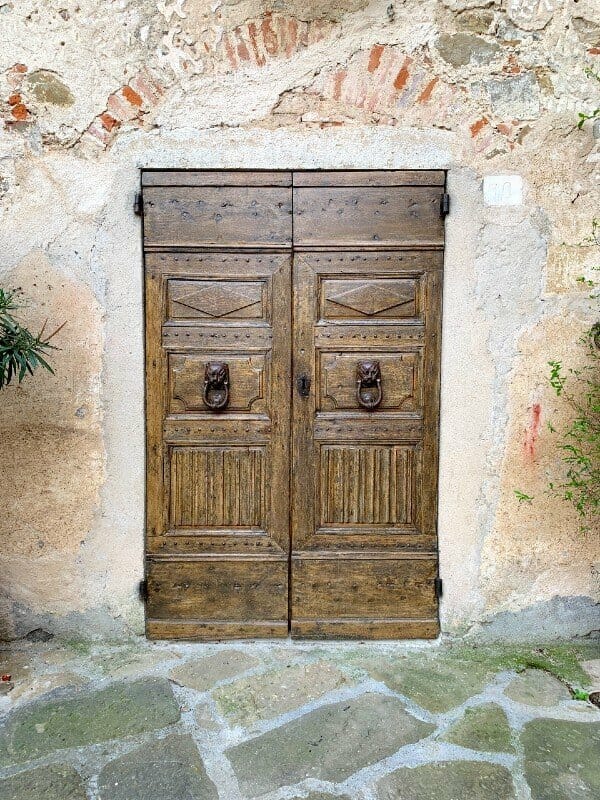 One of many historic doors

There are plenty of tiny dead ends waiting in Montemerano. Sometimes they lead to the ends of houses, while other alleyways take a more surprising turn. Take the street, Vicolo delle Mura.

Towards the end of the narrow street, we came across a charming eatery called Osteria Passaparola Nell’Antico Frantoio.

Though it was closed during our visit, you could easily imagine dining outside and soaking up the atmosphere.

All in all, while a visit to Montemerano doesn’t take up an entire day, it does make an ideal half-day trip.

Another look at Piazza del Castello

Places to eat and drink in Montemerano

In the instance you decide to spend a little longer in the village, Montemerano has some nice places to eat and drink.

From a pizzeria to a wine bar, these following places tick several boxes. Remember to check the opening times before visiting to avoid disappointment.

Spend a little longer exploring the bars and eateries of Montermerano 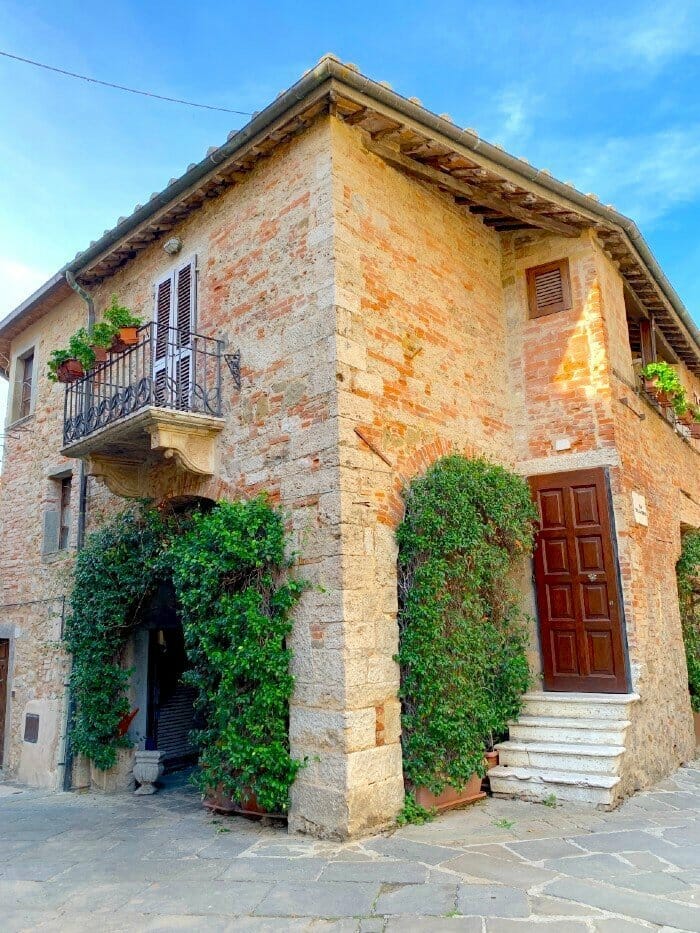 Stop and photograph the traditional homes

Where to stay in Montemerano

Given its small size, you’re more likely to find bed and breakfasts’ in Montemerano rather than big-name hotels.

La Piaggia B&B is located within the village. Offering comfortable rooms and views of the surrounding landscape, it’s ideal for 1 night (or 2).

Casale Fontarosa is situated a short drive from Montemerano. Listed as a holiday home, it’s your opportunity to experience Tuscan living, if only for a short while.

Located on the outskirts of the famous thermal springs is Terme di Saturnia Natural Spa & Golf Resort. A good choice for visiting the hot springs as well as seeing Montemerano, this resort has everything under one roof.

With Roman baths, natural swimming pools and a Turkish bath, your wellness needs are in good hands here. 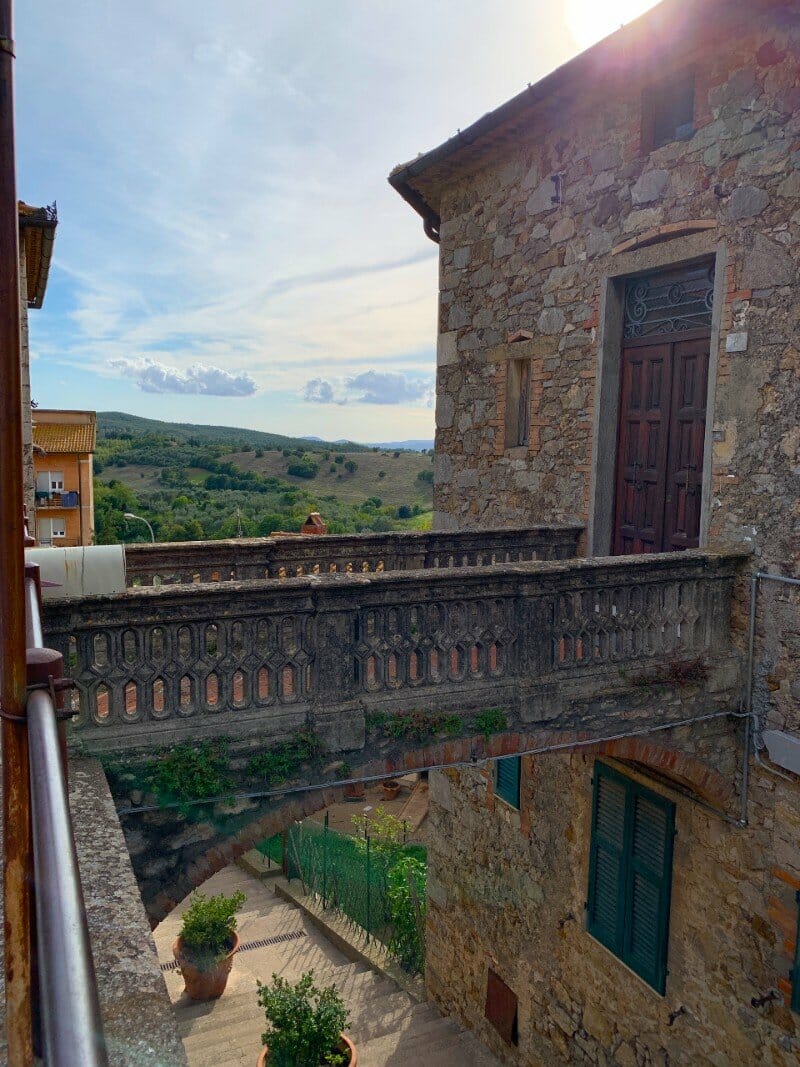 The view before entering the village 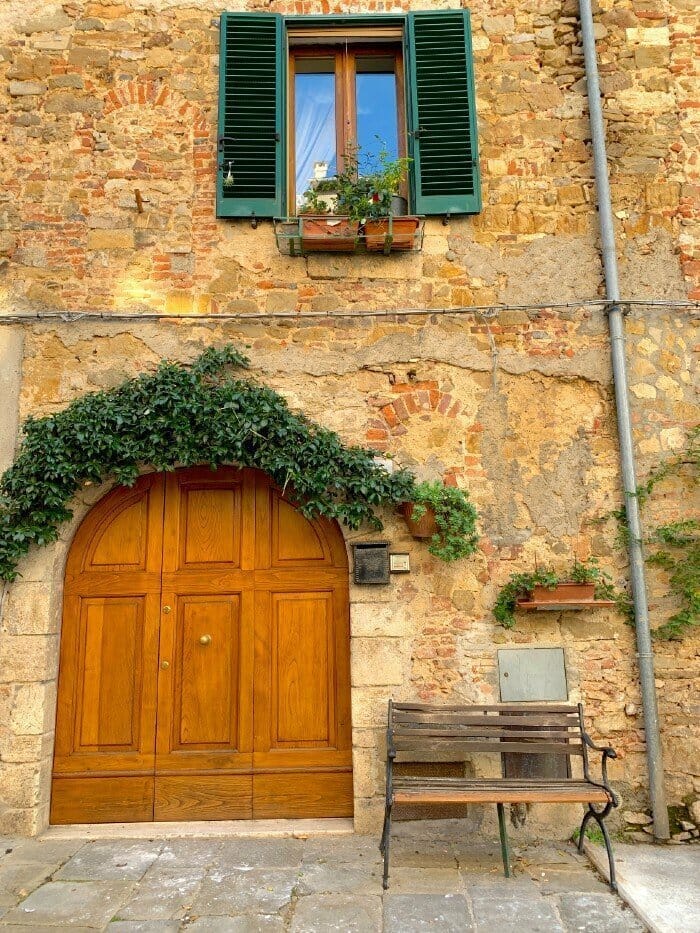 The colors of Montemerano, Tuscany

What do you think of Montemerano? Is it how you imagined a village in Tuscany? Let me know down below.

*Prices correct at the time of publishing. 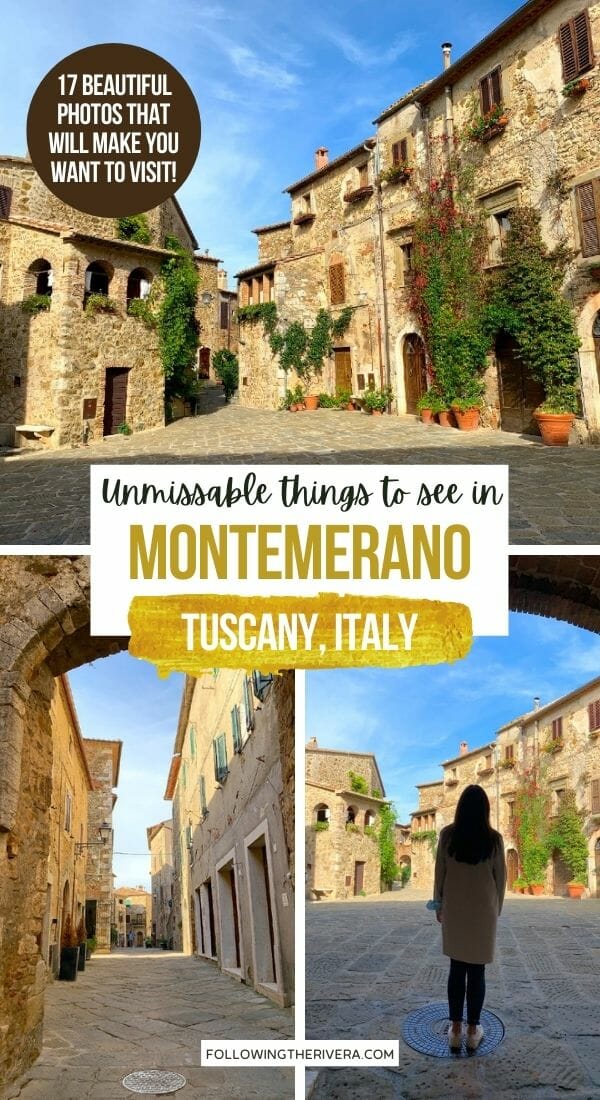 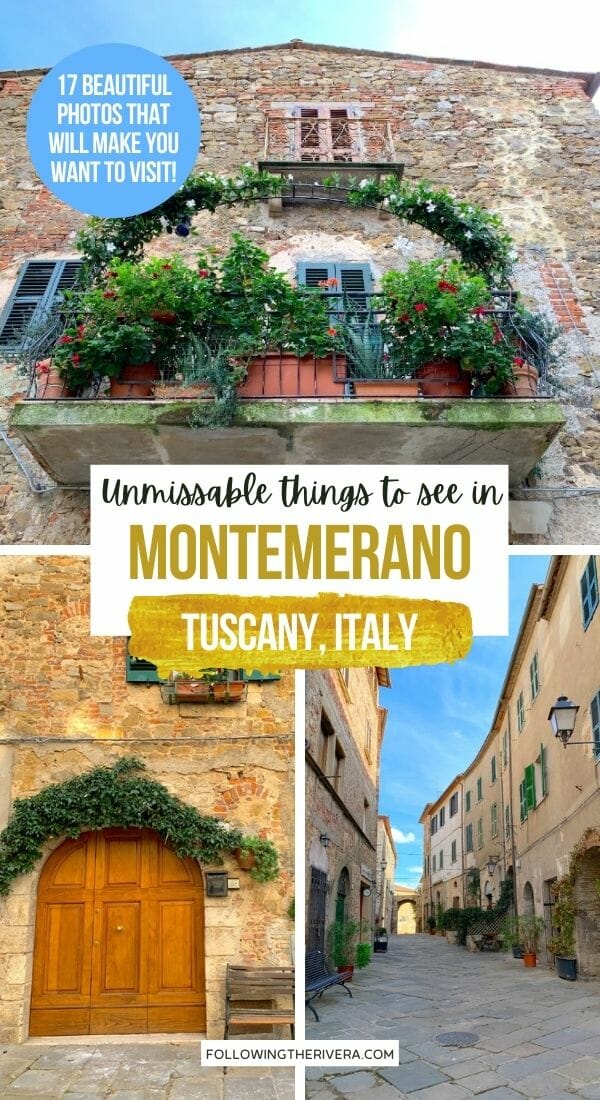