A trip to Puglia | 5 best places to visit

A trip to Puglia — 5 best towns to visit

Best places to visit in Puglia

Situated in the heel of Italy’s boot, Puglia has been the fastest growing tourist destination over the past decade.

With an incredible coastline, turquoise seas and sandy beaches, it’s gained the title of the Maldives of Italy.

As well as the wonderful countryside and amazing food, there’s plenty to tempt holidaymakers to this picturesque region.

So renowned is the food culture here, that even Italians regularly come to vacation in Puglia.

Italian villa rental specialists, Bookings For You, offer a range of villas to rent in Puglia. In this guest post, they’re sharing their favorite 5 towns to visit in the region.

Alberobello is arguably Puglia’s most famous town. It’s certainly one of its most photographed places, given the abundance of trulli.

Thanks to the 1,400 trulli in the town, Alberobello was awarded UNESCO world heritage site status. It’s not surprising given that many of the buildings date back as far as the 1400s.

No visit would be complete without learning more about their history at the Museo del Territorio and the Trullo Sovrano.

The latter’s where you’ll find the town’s largest trullo, laid out over 2 floors connected via a winding staircase.

Related post – Plan a trip to Italy: the complete A-Z

What to see in Alberobello — best places to visit in Puglia

The town’s divided into 2 distinct sections — Monti and Aia Piccola. The former’s home to Rione Monti, a district situated on a gentle slope.

It’s filled with street vendors selling all kinds of trullo-related gifts and souvenirs. It gets extremely busy during peak summer months, with coachloads of tourists dropped off each day.

We therefore recommend that you visit the town either early in the morning or last thing in the day. Alternatively, if you do visit in peak hours, head to Aia Piccoli to escape the crowds.

Where the locals are

It’s slightly further from the modern center of Alberobello. However, this residential area’s less visited by tourists and is therefore, more authentic in feel.

We particularly enjoy heading to Alberobello late in the afternoon. It’s easy to spend a couple of hours wandering through the narrow winding streets, before enjoying a pre-dinner aperitivo.

If you can, book a table in advance at La Cantina. The restaurant isn’t big and tables are in demand meaning that bookings are essential.

Where to sleep in Alberobello

For a truly authentic experience, consider staying in a trullo during your time in Puglia. The limestone walls ensure a good night’s sleep and not everyone can say that they’ve stayed in one.

Trullo Natalia is a stunning 1-bedroom trullo in Alberobello. Situated in the heart of the city, it’s perfect for a romantic getaway. 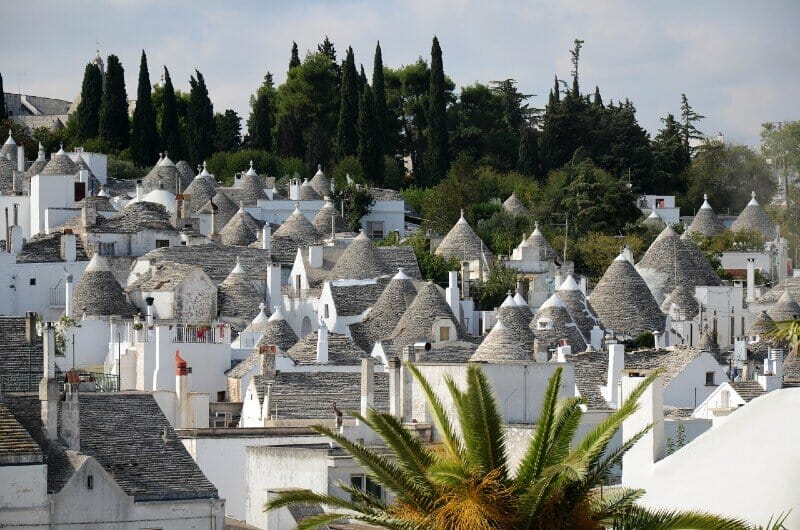 “With an incredible coastline, turquoise seas and sandy beaches, it’s gained the title of the Maldives of Italy.”

Known affectionately as ‘the White City’, Ostuni is easy to spot from a distance. Its name comes from its stunning white façade that reflects the sun’s rays.

The city owes its distinct white color to the lime paint that has been used for centuries. Sources say that its disinfectant properties saved the city’s residents from the effects of the Plague.

The medieval walled city’s small enough to explore on foot. However, if you don’t feel like walking, then there’s also the option to enjoy a tuk tuk or Segway tour.

We are firm advocates of taking the time to explore the streets on foot to fully absorb the atmosphere. Many streets in Ostuni are simply too narrow to explore any other way.

However, take care not to get lost, as the web of streets is a confusing maze. It would certainly have confused the Greek, Roman, Byzantine and Norman invaders from centuries past.

Around certain corners, you can easily come across a dead end. Ahead of you, you may see buildings constructed on top of one another. It’s a real labyrinth to say the least. 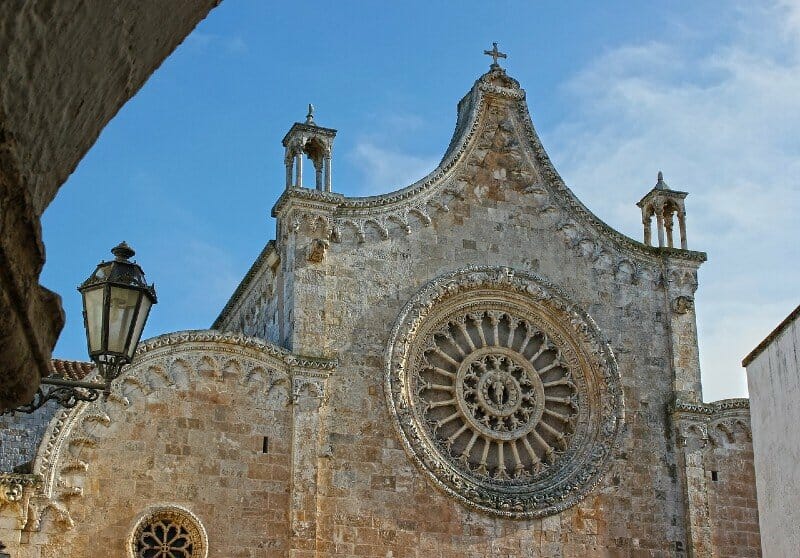 The cathedral in Ostuni is one of its must-see sights

What to see in Ostuni

One building you won’t be able to miss because of its sheer size is the city’s cathedral. Constructed in the 15th century, its late Gothic style differs from much of the architecture in Puglia.

Take the time to admire its magnificent rose window that has Jesus Christ at its center. It’s surrounded by 24 ornately carved columns representing each of the hours of the day.

Overall, there’s plenty to see and do here. There’s a lively buzz in the city, particularly in the evenings when Ostuni comes to life.

Enjoy a vibrant nightlife in one of the bars and restaurants in town. Alternatively, you can head to the city center on Saturdays where they hold a market day.

This 4-bedroom villa near Ostuni is the perfect base from which to explore the city. 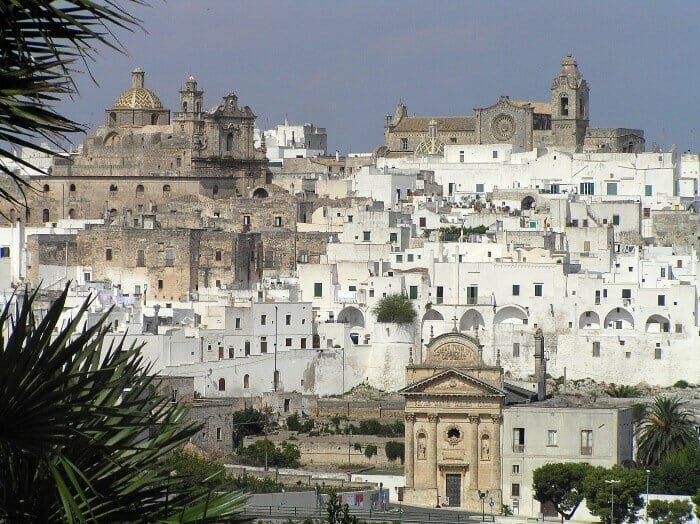 Situated on Puglia’s eastern coast, Polignano a Mare has a very different vibe to its inland neighbors.

Like many of the towns and cities in Puglia, Polignano a Mare has a rich and varied history. Its origins date to the Greeks of the 4th century BC, but it subsequently also flourished under Roman rule.

Visitors will pass through the Porta Vecchia to enter the charming old town. Like Ostuni, it’s epitomized by whitewashed streets so typical of this region.

Take your time to stroll through its narrow streets, browsing some of the small shops that line the way.

Whichever path you take, you eventually reach one of the town’s 3 panoramic terraces.

All 3 have far-reaching views overlooking the Adriatic Sea. You can also see glimpses of the buildings perched on the clifftops on either side.

For a number of years, the town has also played host to the annual cliff diving championships. This is an incredible spectacle that attracts crowds of more than 50,000 people each year.

Talented divers launch themselves off the cliffs and into the sea below. It’s not an event for the fainthearted!

Otranto is Italy’s easternmost city and the most southernly on our list. This stunning seaside city is one that shouldn’t be missed.

The historic center is absolutely beautiful. It’s epitomized by alleyways full of brightly colored flowers and panoramic views waiting around many a corner.

More than the seaside — best places to visit in Puglia

While here, don’t forget to visit the Castello Aragonese. This imposing castle with thick perimeter walls and robust towers dominates much of the town.

Two other noteworthy attractions are the Basilica di San Pietro and the Cattedrale dell’ Annunziata.

The latter’s a Romanesque cathedral dating to 1088. It’s home to the incredible 12th century floor mosaic that depicts the tree of life. 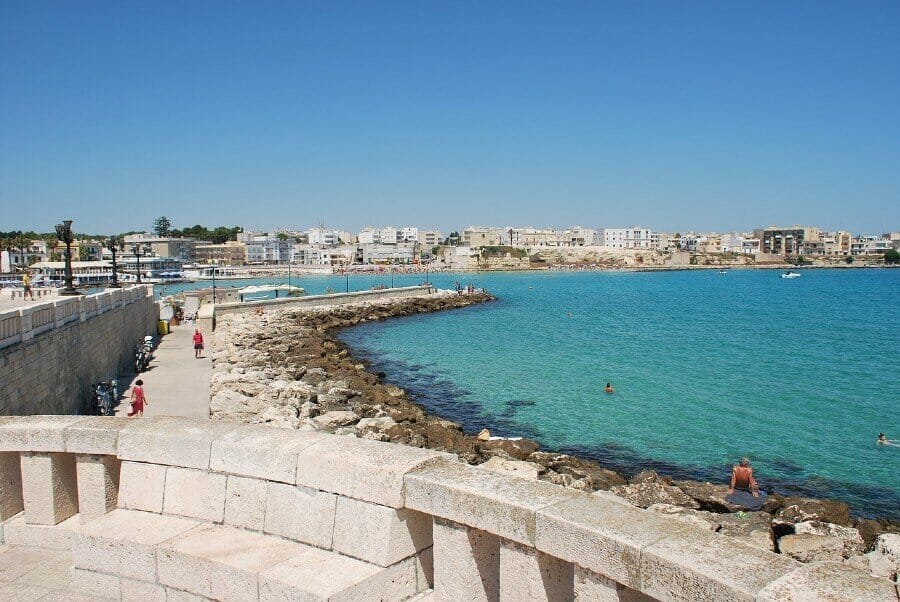 Find your terrace in Otranto for the best sea views

One of the things that always strikes us about Puglia is the sheer variety it offers. Visiting Lecce after spending time in Alberobello or Polignano a Mare feels like spending time in a new country.

Both the ambience and Baroque architecture feel completely different.

Best things to see in Lecce

Just as elsewhere in Puglia, there’s a wealth of things to see and do in Lecce. History lovers will enjoy discovering the Roman amphitheater in Piazza Sant’ Oronzo.

While it can no longer hold the 20,000 people that it once did, you can still enjoy a concert here.

Also in Lecce, is the town’s cathedral nestled in the corner of the Piazza del Duomo. The Duomo was built in 1144 but the 70m high bell tower was added later in the mid 17th century.

The Basilica di Santa Croce is another striking church in Lecce. It’s probably the most intricate Baroque façade that you’ll find anywhere in Italy. 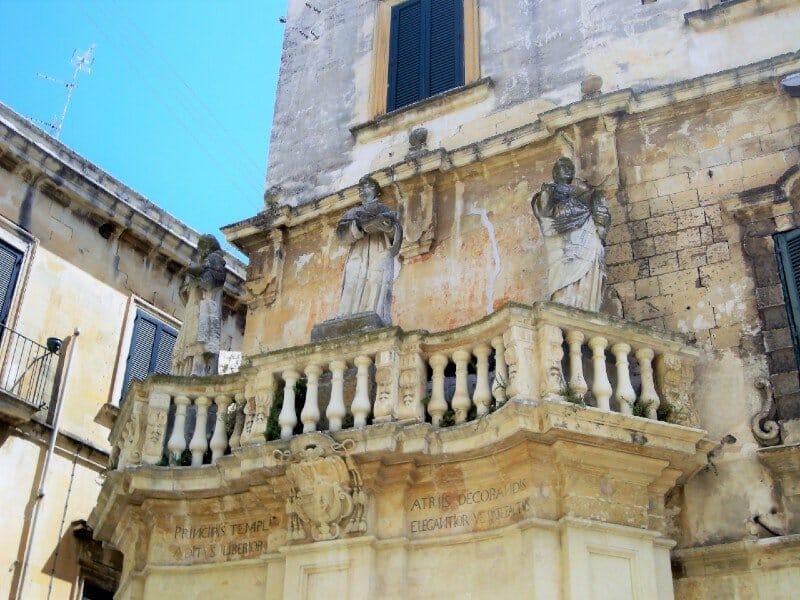 You’ll find the city quiet during daylight hours. The residents of Lecce love their siesta and you’ll find shops, bars and cafes closed between 2pm and 5pm.

Once nightfall descends upon the city, the piazzas and streets in Lecce teem with life.

Take a seat with a specialty coffee (caffe in ghiaccio con latte di mandorla) and watch the people pass by. An espresso with ice and almond milk, this coffee’s a Lecce favorite and one to try.

End the evening on a note of delicious hearty peasant cuisine and a glass of deep red wine. It’s a characteristic you’ll find across the city’s many restaurants, and is something inherent to the Pugliese culture. 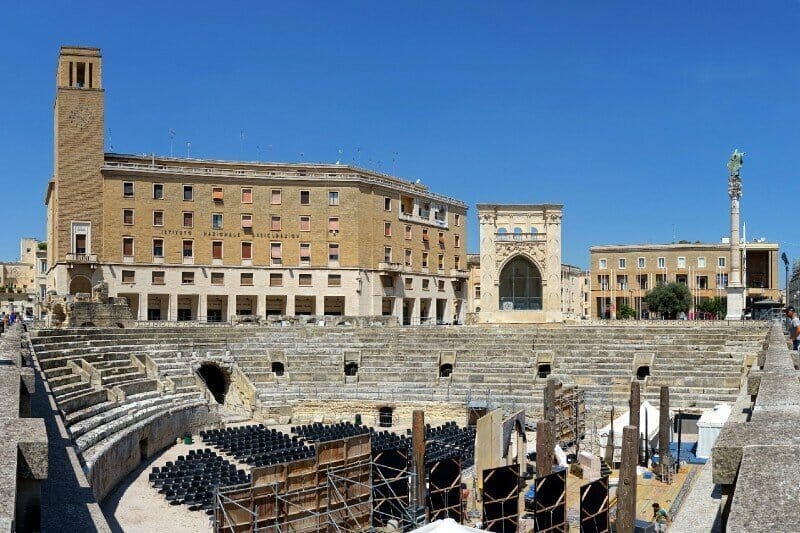 Concerts still take place at the Roman amphitheater in Lecce

If this post has inspired you to visit Puglia, look for advice on where to stay at Bookings For You.

They’ve 300 villas and apartments to choose from all over Italy, including a wide selection of villas to rent in Puglia.

This award-winning Italian villa rental company has something for every budget, group size, style and taste. They can advise on the best options for you and your family through their personal concierge service.

What’s more, you’ll get an exclusive discount if you choose to book with them. Just enter discount code FOLLOWING-THE-RIVERA at checkout and Bookings For You will do the rest.

Disclosure: This post was written in collaboration with Bookings For You. It may contain affiliate links, which means I may receive a commission if you click a link and purchase something that I’ve recommended. Thank you for your support. 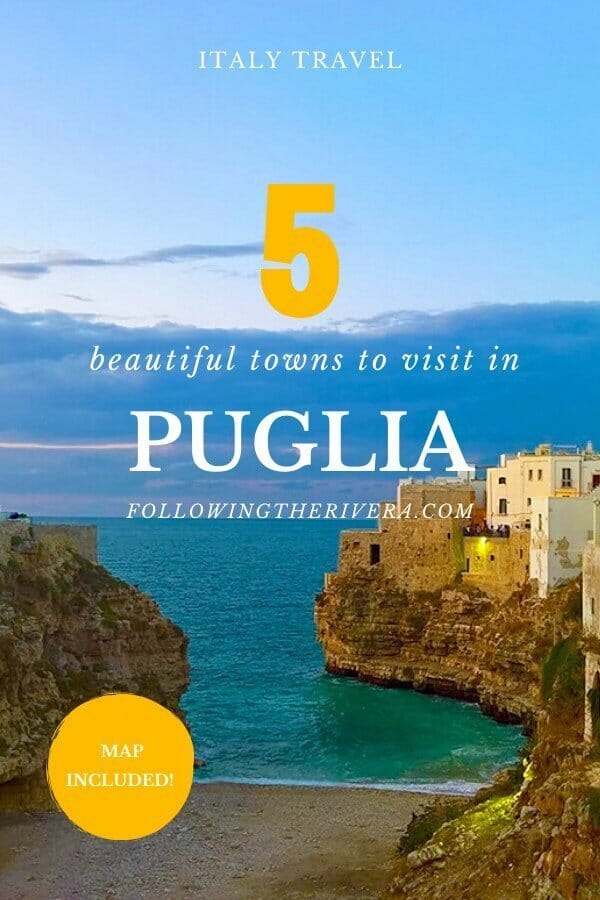 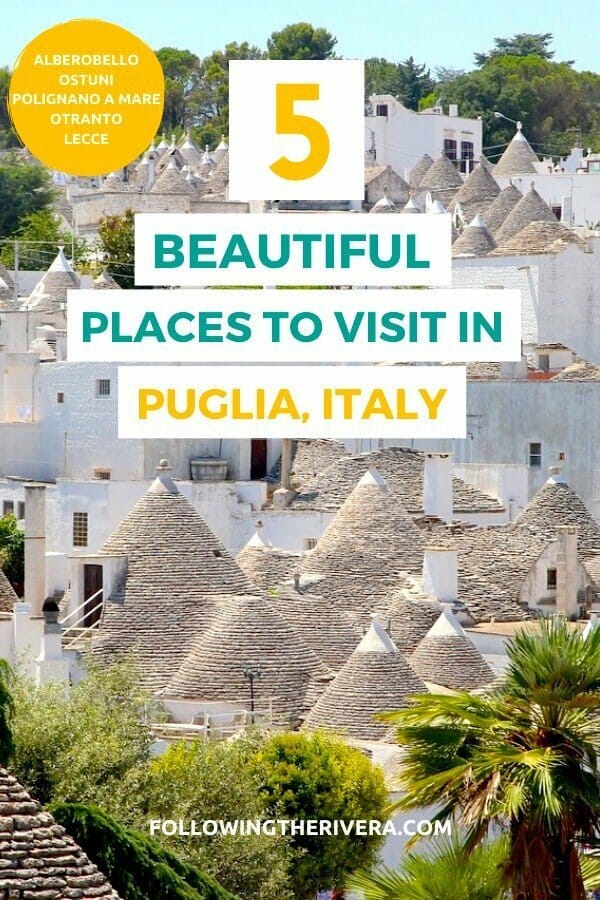